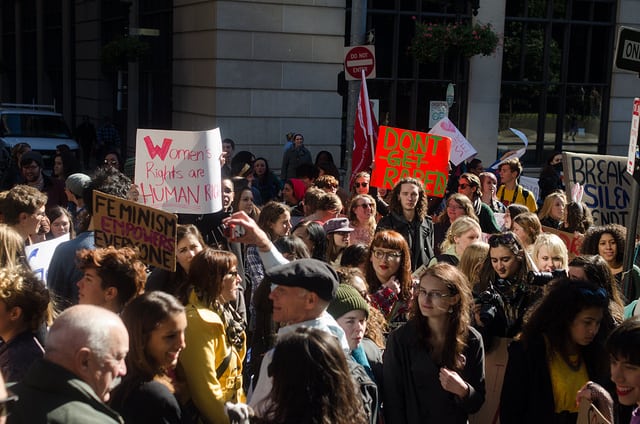 Feminism and the new threat to equality

It was International Men’s Day (IMD) last Thursday. This year, the organisers presented the day as an opportunity to promote “a focus on men’s and boy’s health, improving gender relations, promoting gender equality, and highlighting positive male role models,” according to their website. This year was also, however, the first time that the day had ever seen such controversy. Since 1999, IMD has never caused as much of a discussion about what was going on across the nation, particularly this week. This signals a new development in our gender equality movement and raises a new question about whether those who are causing it most harm are in fact those claiming to champion it.

I am, of course, talking about the feminist movement. In a dramatic resurgence matched only by the Star Wars franchise, feminism has, in recent years, become a big topic of societal conversation in which women’s rights are finally being given the media and political attention they need. However, this is not an analysis of the last five years of feminism, or a grand exploration of the International Men’s Day argument—this is an evaluation of recent standout examples of feminist factions which are unintentionally ruining gender equality for everyone.

First, the backlash towards International Men’s Day: this has come in varied forms, including articles typified and published (perhaps unexpectedly) in The Independent. Labour MP Jess Philips’ article is soaked through with cynicism—she dismisses the need for a mens’ day as “men are celebrated, elevated and awarded every day of the week on every day of the year.” Less scathing but missing the point similarly, is Michael Kimmel’s article for The Guardian, where he questions whether IMD is just a response to the growing popularity of International Women’s Day—which has a stronger case to make for its own existence.

The argument against International Men’s Day on the grounds that it undermines the gender disparity that women experience is, itself, contradictory—how can someone claiming to endorse equality be so against the annual one-day celebration of one sex, but at the same time, be so supportive of the other?

Initially, IMD’s tremors were in fact felt in the university community. York had to disband its plans for celebrating the day after an open letter complaint had accused IMD of anti-feminist ideals. This complaint was met with its own opposition in the form of a 4,000-signature strong counter-petition. In the case of York, a clear bilateral debate had taken place over whether IMD was conducive to equality or not. Now an unhealthy standoff whereby feminists are seen as prohibiting a day dedicated to men from being celebrated exists—and so as a result, men want that day more than ever.

This is not the first time feminism in a university context has been the bad guy. According to an article in The Telegraph, at Durham University last year, a student’s attempt to set up a men’s issues society in the wake of his friend’s suicide was rejected by the university’s Societies Committee—yet the Feminist Society was unable to cater for these issues as it apparently “would be extremely unreasonable to expect [Fem Soc] to support and cater for the needs of men.” Though the Feminist Society did not object to the student’s raising awareness of such issues, it was not the platform for gender equality that both men and women should be able to utilise. In failing to cater for both women and men, it had failed in its sole purpose. Gender equality was once again divisive.

Now back to September 2014. We all remember when Emma Watson had made the most circulated contemporary speech on feminism at the UN, publicising the ‘HeForShe’ campaign and defining the feminist goal to have equality of the sexes, not at the expense of men. A month later, the door that had been opened for male involvement was slammed back over the furore surrounding astronaut Dr. Matt Taylor’s decision to wear a provocative shirt on TV. Through a weeping apology, the man who had helped land a rocket on a comet showed how ruthless some feminists had become over tedious cases of contestable ‘sexism’.

At this point, men had felt very much unwelcome at the party, decided to leave early, and came back with ‘Meninism’. Described on Wikipedia as semi-satirical, this supposed movement rather tragically throws up the rare point about gender issues for men amongst a murky stream of sexist bile. A ridiculous response to what many men see as the man-hating, delusion of feminism, they have successfully distorted the work of everyday feminists so that all feminists appear radical. This has gotten to a point where the 90’s term ‘feminazi’ is no longer applicable in the eyes of a ‘meninist’ follower, as all feminists are ‘militants’ and menstruation is a nasty chemical weapon that makes them the greatest national security threat since Jeremy Corbyn.

‘Meninists’ and ‘feminazis’ may be the most over-the-top examples of gender rights campaigns, however, there is no question of a growing conflict-like discourse in the gender equality space. Yes, men have been against feminism before feminism had even existed, but now in the 21st century resurgence of the movement, we have seen an increasingly recurring instances of harmless men being punished. Women’s rights still require some serious progress, but this does not mean men should be ignored.

We need a policy of gender-blind inclusion. It is crucial that men join in on the conversation, but it is vital that women are the ones who make space at the table. Women dominate the feminist sphere, they can ultimately decide the role men play; after all the inferiority that a patriarchal society brings, women know better than anything what it’s like to have your side of the argument shunned.

Feminism needs to get men on its side as much as it needs to get women on its side. Jess Philips’ claim that “being a man is its own reward” not only smacks of misandry, it sums up a poisonous attitude in the feminist community that needs to go—along with all the typical obstacles for women gaining total social equality. Men can be obstacles, but we can also be here to help—only if you’ll let us.