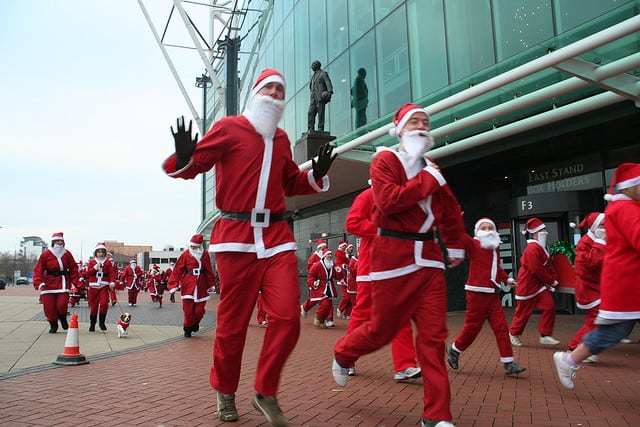 If all the mentioning of Christmas puddings and mince pies has yet to whet your appetite enough to go and want to undertake an admittedly difficult 5-mile-long run on a Sunday morning, then this week’s festive offering may do just the trick in inspiring you to dust down your running trainers. They say that football has little spirit and connection with the fans in a modern-day focused solely on profits and success on and off the pitch, yet it is community events like a Santa Run that maintain solid links between your everyday fan and the city’s two heavyweights in world football. Both Manchester City and Manchester United therefore cordially invite you to join in their annual Christmas Santa Run for 2015. As we’re here to showcase the best of what Manchester has to offer, it is only fair to ensure some neutrality by offering both and we will leave up to you which race you sign up to, or more importantly, which colour Santa outfit you would prefer to wear.

Yes, that’s right, and in keeping with the colours of both Christmas and their iconic home shirt, Manchester United have opted for a traditional red Santa outfit, whilst their “noisy neighbours” Manchester City are bang on trend this AW2015 with a stylish yet simplistic sky blue Santa outfit to complete the race in. Again, the choice is completely yours, but it is worth noting that regardless of the colour of the outfit, of the stadium around which the race unfolds, and of the team hosting the event, all proceeds from both events go to charities that help to support the clubs’ respective foundations, which for us, is surely the most important thing this Christmas! In terms of distance, both runs offer a 5KM route, but please, please note there is no expectancy in either race to run the whole distance, and walking is encouraged. The race element is not what is important; instead, raising money for the respective foundations at both teams is paramount.

There is, however, the option for anybody who regularly runs to take part in a Santa Dash at Manchester City, but unfortunately no Santa outfit is provided for this elite race. Whilst at Manchester United, there is a shorter route of 2KM available to choose for those who don’t particularly want to run a full 5KM!

For those unfamiliar with two of Manchester’s most iconic landmarks, or simply for anybody who has yet to tick it off their list of places to go and visit whilst they study here in the city, let us be your tour guides in directing you to both stadiums.

Etihad Stadium (Manchester City): I would recommend the Metrolink tram system, since the club are lucky to have a dedicated tram stop—Etihad Campus. The stop is located adjacent to the Stadium, beside City Square. The journey time from Piccadilly is less than ten minutes. On event days, trams run to/from the stadium stop every six minutes. A number of public bus services run from all directions and, from experience, the 216 service as well as several others leaving from Manchester’s Piccadilly Gardens offers a reliable connection between the city centre and the Etihad Stadium.

Old Trafford (Manchester United): Again, like for the Etihad Stadium above, I would recommend the Metrolink tram system. From the city centre, you can catch an Altrincham tram, alighting at Old Trafford, or alternatively choose an East Didsbury tram, alighting at Trafford Bar. However, if you would prefer to travel by bus, there are again a number of services that run directly to Old Trafford football stadium including the 79, 250, 255, 256, 263, X50. The X50 and 250 both run every 15 minutes from Manchester Piccadilly Gardens and would be my two preferred services.

The Manchester City Santa Stroll costs £10 to enter the race and your blue Santa outfit is included. Meanwhile, for those wishing to compete in the MCFC Santa Dash, entrance fee remains the same, except instead of a Santa outfit you will receive a white t-shirt, which indicates your participation in the dash.

The Manchester United Santa Run costs £15 and like MCFC, includes your Santa outfit in the bundle. Both races are further incentivised by a goodie bag following the completion of the race and a range of festive activities during the event, ranging from spot competitions and early Christmas presents on the day, to guest appearances from club legends past and present!

Given the nature of the event, in that it is largely a fun-run, the route is not published online before very close to the event itself, so do please keep a look out on both Manchester City’s and United’s official websites. However, in terms of the scenery and the landmarks you will be running around in your Christmas attire, they are certainly worth admiring, and this might perhaps be your perfect (and undeniably your most unique) photo opportunity. From personal experience, having run the Manchester City Santa Stroll on two occasions previously, the route involves running both through the concourse inside the Etihad Stadium, before travelling outside to gain an exclusive look at the Citizens’s brand-new football academy complex (most notably where President Xi Jinping and Prime Minister David Cameron visited several weeks ago).

Meanwhile, the Manchester United website has confirmed that this year there is the opportunity to venture down the tunnel at Old Trafford towards the finish line after taking in the sights of the local Imperial War Museum, The Lowry Centre and Media City UK. So make sure to not forget your camera!

If you have any requests for local teams, sports or events taking place in Manchester, or if you wish to be involved, please contact: [email protected]