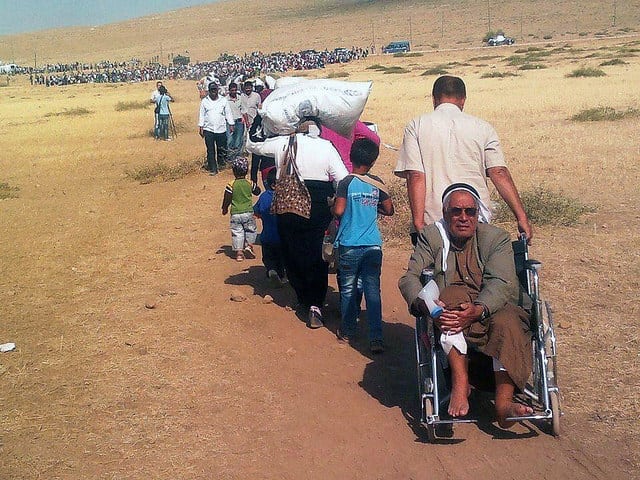 We’re all losers in the terrorist name game

IS, ISIS, ISIL, Daesh… it is not surprising that confusion surrounds the identification of the militant group. All part of the diplomatic dance that is the politics of naming, it was not that long ago that politicians and the media sought to completely deny the group the status they desired by using the phrase ‘so-called Islamic State’. Since then, a wish to lessen their significance has led to the use of ‘ISIS’ (Islamic State of Iraq and Syria) or ‘ISIL’ (Islamic State of Iraq and the Levant), with David Cameron requesting the BBC to stop using Islamic State, or IS, since the group is neither Islamic nor a state. The Arabic version ‘Daesh’ is also increasingly being used in Western media as a name disliked by the group both for its rougher sound and similarity to the word meaning ‘to trample down or crush’, which has sparked a number of puns by groups such as the Free Syrian Army.

Though language can be the most powerful of tools when used correctly, and the power of persuasion is certainly IS’s most dangerous weapon, is such a war of words really a display of power over IS, or rather of weakness as lost battles turn linguistic?

There is much to be learnt from a similar trend in the Israel-Palestine conflict that began with the Zionist movement’s declaration that Palestine was “a land without a people for a people without a land.” Now each side, through refusing to voice the other’s existence, seeks to deny an evolving truth. Mentioning the Palestinian Authority at Israeli airport security will guarantee a few hours of interrogation is added to your arrival despite the PA’s actualisation through the Oslo Accords. The West Bank is typically referred to with the Hebrew name of Judea and Samaria, and Palestinians are eradicated in Israeli tourism adverts. Meanwhile, many Palestinians try to avoid direct reference to Israel, instead using terms like 48 (the year of Israel’s founding) and al-dakhil (‘the inside’), in the belief that acknowledging the state’s existence is to accept the 1967 boundaries.

Yet stubbornly ignoring the reality presents an obstacle to conducive change, for refusing to acknowledge the presence of the other will only result in a situation of stalemate. If you close your eyes as your house is torn apart, you might be able to convince yourself that it still stands, but only will you be able to start rebuilding it once you open your eyes and accept that the damage has been done. There is thus something tragic in the sense of despair created when the reality is so offensive that you can only continue the struggle with one eye closed and your only remaining power is that wielded over the words that cross your lips.

This is true, too, of Israel, and is something Palestinians should find strength in, for their refusal to acknowledge the continuous presence of an increasing Palestinian population displays their anxiety that they are running out of options to deal with a threat they never imagined would prove so resilient. The attempts to redefine their oppressive regime, such as by reference to the separation wall as a ‘dividing fence’, even belie international law and shows they are living in an illusion.

Of course, the situation with IS is by no means contextually comparable, but the political name game that continues to be played exhibits a similar weakness. Politicians’ awkward changes to the group’s name as their regional power increases, not only makes for uncomfortable viewing but betrays the government’s fear of a group that eludes geographical control.

Attempts at linguistic delegitimisation also risk downplaying the strength of IS, and seeking out a name that denies their Islamic identity is counterproductive. Islamophobes certainly need to recognise that the form of Islam preached by IS is a radical one, unaccepted by the majority of Muslims, but whilst we might disagree with their concept of Islam, it is nevertheless a concept integral to their being, and that is something that cannot be addressed simply by renaming the group.

Though it might be true that IS detest the name Daesh, so much that they have beheaded those who use it, such games are therefore still ultimately reminiscent of playground name-calling. This is not to suggest that sticks and stones, or now cluster bombs and drones, are more effective than words, but that such futile attempts at control will also not help to address the causes of such a complex phenomenon.