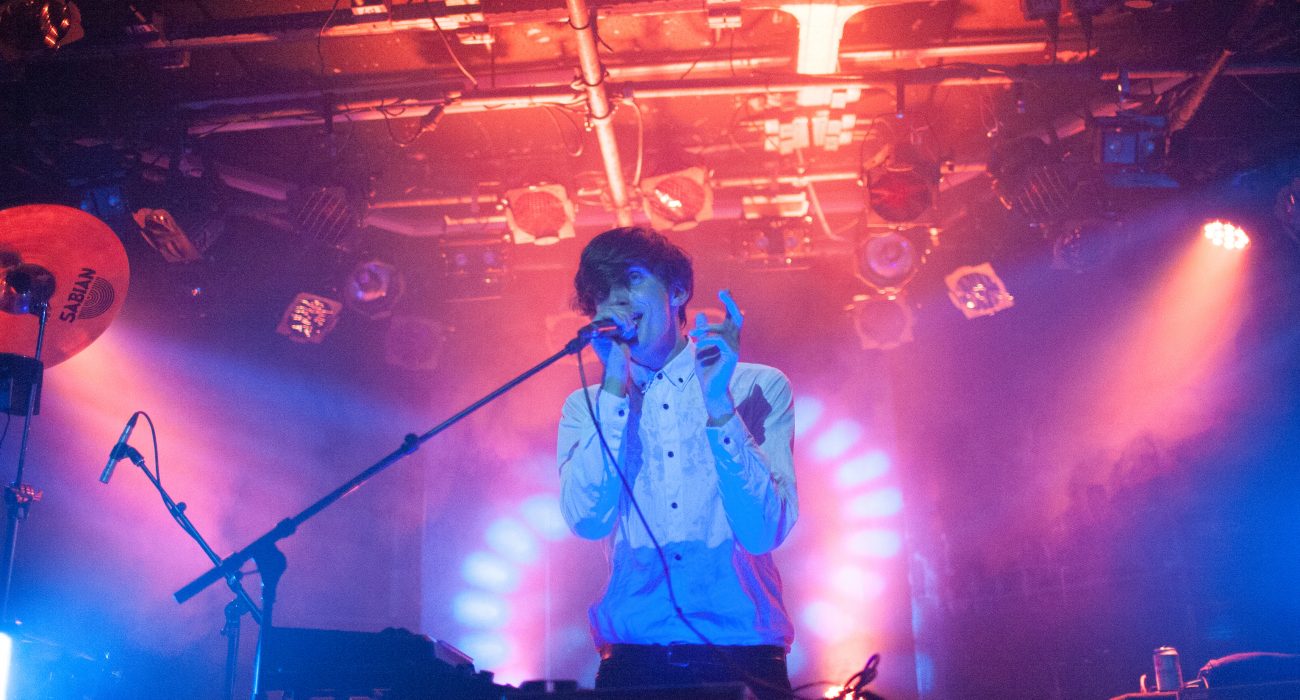 Four years is a long wait between albums nowadays. The vocals and instruments of NZCA Lines, Michael Lovett, is well aware of this. “It was never supposed to be that long,” he says of his second album Infinite Summer, a concept album about planet Earth in the midst of a sun turned red giant. “I finished a version of the record in 2014,” he says, before being “offered to play with Metronomy”, thus delaying its release. The album’s concept came out of “reading science-fiction novels that I’d never properly read”.

Lovett hesitates where to pinpoint the source of its inspiration, yet credits album track ‘New Atmosphere’ loosely for starting it all. Of the concept itself, (“It’s not very original,” he laughs) Lovett already had some established ideas, but admits he pilfered a little from JG Ballard’s The Drowned World about “the sun expanding and the sea levels rising, and everyone getting a little bit possessed by the sun”.

Of course, talking about sci-fi in Northern Quarter’s Soup Kitchen meant that I couldn’t pass an opportunity to mention the nearby Forbidden Planet and talk turns to Lovett’s sci-fi credentials (“I don’t have much sci-fi memorabilia…the ephemera”). He remembers the time he made a Boba Fett costume for Hallowe’en when he was “seven…or maybe five”. “The helmet was really spot-on,” he says proudly.

His debut featured geeky lyrics about falling in love with an airship and formatting a hard drive—hardly conventional topics in the world of rock and pop. But it isn’t mere novelty for novelty’s sake. That’s partly because the songs on Lovett‘s debut, and indeed Infinite Summer, are absolute gems: a unique, off-kilter brand of cerebral electro-pop that doesn’t forget to feel. But it’s mostly because Lovett is pretty capable of stringing together a coherent story.

“I really wanted to make this album more of a proper concept album,” he says, and talks about approaching the album like an art project. “The first album was toying with these ideas,” he continues, “[but] it was intentionally quite vague and elusive. I wanted to be explicit.” The reason for Infinite Summer’s gestation is a fairly ordinary one: “I’m quite good at distracting myself. Spreading myself too thin basically.” He’s not the only one easily distracted. It seems nowadays we’re constantly force-fed a bombardment of new bands and new music without allowing it to digest. “It is bad. There’s a huge saturation of music. I feel my own attention span being constantly diverted. When I’m trying to work, [I turn] off my email notifications on my phone. Having said that, I really wanna [sic] work quickly and make another album.”

He says he needs to do more of “capturing the spontaneous”, though he’s still a perfectionist. He eschewed a vocal take for ‘Persephone Dreams’ made with “a proper mic” in favour of the demo recording produced on a mic “that’s not really supposed to be for vocals” when he had a nasty cold: “The quality was better but the performance wasn’t as good.”

What does he make of the increasing trend towards solo acts and duos? Is it the legitimate sound of something new, of 2016, or are people strapped for cash? “A bit of both,” says Lovett. “I could be doing this on my own if I wanted to.” However, he notes that given the spirit of the record—which saw live drums provided by Sarah Jones, erstwhile having NYPC and Hot Chip drummer, and Ash’s Charlotte Hatherley on board—“it wouldn’t make sense if I tried to do it on my own.”

He praises the theatricality of some performing artists. “Gold Panda plays by himself, but it’s quite physical, he’s really into it. You can play everything if you’re playing by yourself, so it doesn’t have to be a pared-down sound. It’ll be very interesting to look back in 10 years and think of what the sound was,” he says, regarding the sparse, electronica-addled pop du jour. “It’s definitely a very particular sound, brought about by the technology that everybody now has access to: tuned kick-drums and trap hi-hats, this clean sound, people like Flume.”

Surely that means the end of long-standing indie guitar band phenomena? Perhaps the emergence of solo artists making their own music is the new wave? “I think it comes in phases, but maybe,” he muses. “Good songwriting always stands out whatever the genre is,” before praising Field Music, Stealing Sheep and Mac DeMarco. I probe him about the partisan coverage of guitar bands over all else in the music press: you’re more likely to see Catfish & the Bottlemen or Blossoms on the front cover of Q than, say, LA Priest. He’s not entirely sure. “I think the whole synth thing is overplayed now,” he says archly. “Either way, people can get a bit purist about it. I think it really depends on the artist rather than the genre. DIIV sound like Slowdive to me. I mean, it doesn’t and it is different, but that’s the gist of it. But I guess I’m just sounding like I’m getting old really.” Where does he see the future of music going? “It’s gonna [sic] be interesting to see if a music industry exists in twenty years.”

As for music in 2086, Lovett cites some new music he discovered based around “a guy recording his voice in a room and playing the recording of his voice back and recording it again. Eventually, what you end up with after 40 replays is the just the resonant sounds of the room—you lose the voice completely, you lose any definition of the voice, it’s just the acoustic sound of the room.” It seems that Lovett is as ready for the future of music as anyone.