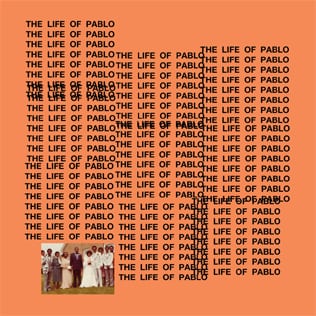 Kanye West’s The Life of Pablo was always going to be as polarising as the man who made it. Over the course of 18 tracks, he goes from wishing his penis had a GoPro to exhibiting hitherto undisclosed self-awareness on ‘I Love Kanye’: “I miss the old Kanye,” he opens, “I hate the new Kanye… the always rude Kanye.” His taste is as omnivorous as ever.

’30 Hours’ finds West ad libbing and taking a mobile phone call over an Arthur Russell sample, while André 3000 provides vocal garnishing. What started brilliantly turns self-indulgent, but something about his extended, half-arsed coda is very entertaining. ‘Fade’ drops into slinky, muffled Chicago house—crisp TR-909 handclaps and all. The arrival of grating autotuned singing, gospel voices and low-slung, chattering trap threaten to overwhelm the tune, until it abruptly stops.

‘Feedback’ struts with what appears to be a whining, high-pitched police-siren as its lead melody—it might piss off some, it might delight others. Many will just clench their fists. Still, for every ludicrous boast (“Name one genius that ain’t crazy… I shouldn’t even bother with all these gossiping, no-pussy-getting bloggers”), there’s a brief glimmer of self-awareness (“I’ve been outta my mind a long time”). ‘FML’ is less involving, both lyrically and musically, until a bizarre interpolation of Section 25’s ‘Hit’ heaves into view—the thrilling, disturbing sound of its creator’s mind unravelling.

‘Freestyle 4’ and ‘Famous’ both encapsulate the entire record: Less songs than splintered, sporadic and fragmented ideas. …Pablo feels like Yeezus—noted for its impressively abrasive brutality and brevity—engulfed in a protracted bipolar episode, growing more introverted and ecstatic with each track. Both ‘Wolves’ and ‘Real Friends’ are truly affecting. They sound doleful, though glancing at their lyrics, they’re anything but. The former appears to have West compare himself, his wife and young son Saint to Joseph, Mary and Jesus; on the latter, he laments the fact that he has no real friends, less doleful than a bit whingey.

Some tracks fall flat: The less said about ‘Low Lights’ or the supremely uninteresting ‘Waves’ the better. But when it works, like the jaw-dropping ‘No More Parties in LA’, it really works. Hands down, it is the album’s best track. However, it puts forward the compelling argument that despite his sonic achievements, West’s lyrical dexterity has been surpassed by others, namely guest rapper Kendrick Lamar, who delivers funny, dexterous rhymes over Madlib’s effortless production.

West, ‘No More Parties…’ aside, is rarely on the kind of form he displayed on previous albums, scant on the incisive social commentary of ‘New Slaves’, and even the braggadocio here feels rehearsed. Yet it wouldn’t be a Kanye West album if it wasn’t a flawed tour de force.