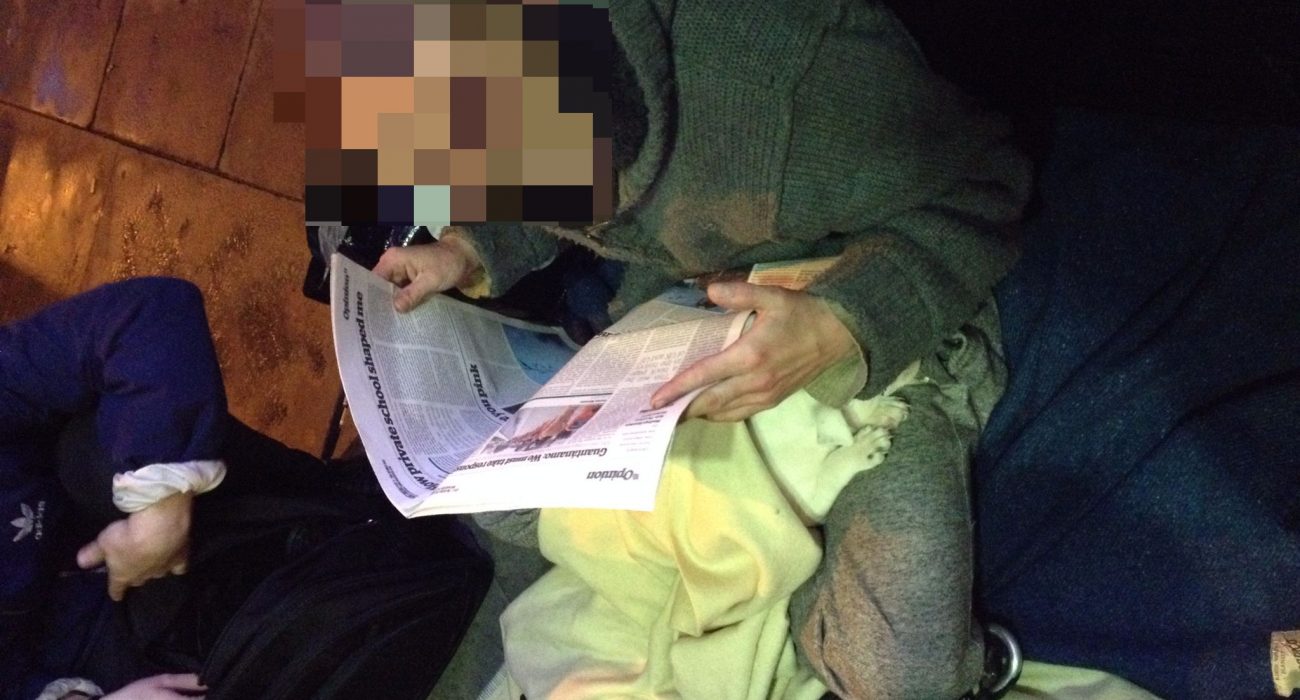 Feeding the streets for a fiver

Having lived and walked in Manchester for three years now, it has been impossible to ignore the presence of the many rough sleepers paving the streets from Oxford Road to Piccadilly Gardens. It’s a problem that seems to be only getting worse, with the anarchist street-squat known as ‘the Ark’ closed off as commissioned by MMU.

Life by chocolate. Photo: The Mancunion

Dwellers were physically forced off the area by use of large metal fences. The Ark opened not as a protest, but as a display of the homeless taking control of a situation that wasn’t being responsibly handled. Things were desperate, and due to the lack of adequate care and support, the people of Manchester’s streets—quite admirably—took matters into their own hands.

The response was ignorant. The makeshift home to many was barricaded with little offer of an alternative solution. It was simply closed down.

The Ark was actually very valuable, an example of suffering people taking responsibility for their own lives. The animalistic caging of these people demonstrates the lack of the ability for those in power to empathise with those in poverty as fellow human beings.

Everyone should have a right to basic food, shelter and water. These are the essentials of life. It feels wrong that the homeless are leaning against the solution: empty buildings. A friend and I discussed how aliens would look down on our city from an aerial view and laugh in astonishment at the ridiculousness of the problem. We are in a dystopic state run by power systems that can’t see further than the boundaries set up by ‘rules’, ‘systems’ and governmental ‘structures’. People are suffering in the cold when the materials for the solution are empty and unoccupied.

Many of the characters are ex-cons or perceived as criminals. However, this shouldn’t mean that they don’t have a fair chance at life. The solution to crime is not punishment, but education. Many of these people have come from difficult and abusive backgrounds, have problems with disability, and have struggled with discrimination or lack of help.

But as well as this, some of the people on the street are there as simply a case of being in the wrong place at the wrong time. It’s all down to unfortunate circumstances.

Understandably, living on the street can lead to more issues, which makes the problem worse and worse with the vision of recovery fading further away. Sleeping in cold, damp conditions with little access to hot food, shelter and hygiene facilities can often lead those who arrive to the streets in relative health to quickly deteriorate, and often resort to drug and alcohol abuse.

While it is a myth that all homeless people have problems with drug and alcohol abuse, the problem is still very real and apparent, which is why the act of giving money and walking on feels like a disposable, and even detrimental, form of help.

It’s difficult to know where to begin when taking action on a personal level but something that can be done directly is to help out with Student Action outreach projects that run every night of the week. Volunteers prepare and hand out food to those in Manchester without a bed to sleep in, walking down Oxford Road up to Piccadilly until supplies run out. Offering help and advice is the main priority, but handing over food is a gateway to that conversation.

Depression, bitterness and feelings of hatred also feature, with reason, in the minds of many. However, it must be said that 99 per cent of the people Student Action speak to are wholeheartedly grateful for the help that we provide, and many have said that our help is the reason they keep on going. We need to promote equality and teach people that life can be lived in a positive way, and give everybody reasons to be grateful for it and respect it. If money doesn’t work, kindness definitely does.

To make things as ethical as possible, I came up with two variations on a vegan sandwich. Food may be fuel but with keeping humanisation and levelling in mind, I would prefer to feed someone else the same quality of food that I’d hope to nourish myself with.

Dark chocolate £1.00
In a bowl, melt ½ a tub of peanut butter with a few squares of dark chocolate, microwaving in intermittent bursts of 20 seconds until runny and spoonable. Half the sliced loaf into two adjacent stacks and spread one pile with the chocolate PB on one side. Slice bananas and place atop the nutty goodness. Finish with the remaining bread and marvel that you have made a cheap, healthy, ethical, nutritious and delicious sandwich.

Info: seeded bread is a slow carbohydrate, taking longer to burn energy and thus keeping the body going for longer, the natural sugar in banana also creates a healthy energy spurt and is a good source of potassium, nuts are a great source of fat which helps to balance the meal and dark chocolate releases endorphins and serotonin, making this the perfect food-energy boost.

Mixed leaves £1
Spread one side of one half of the loaf generously with hummus, and the other side of the other half with mango chutney. Grate the carrots into a large pile and top the hummus bread. Finish with a gathering of mixed leaves and squash down. Variations on this include sliced mixed peppers, sundried tomatoes or smashed whole chickpeas with some oil and spices.
Info: good bread again, hummus good protein source from chickpeas, carrots 1 of 5 a day, mango for umami flavour enhancing goodness. Which is definitely healthy and VITAL.
So if you got anything from this article, whether it be an alternative perspective on the homeless in Manchester, or a surprising revelation on the inexpense of vegan life, please think twice about the personal choices you make that contribute to a wider social expanse.