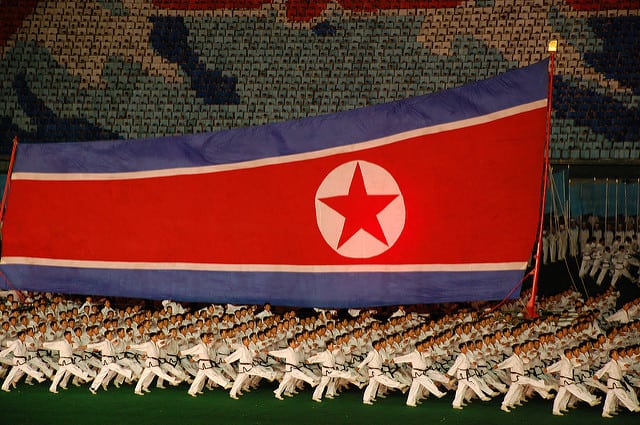 We need to talk about North Korea

North Korea has threatened (again) to deploy nuclear weapons, so shouldn’t we be a bit more concerned? The threat, targeted at the US and South Korea, comes after the two countries began joint military exercises that are carried out annually to test their defences against the regime. The exercises were the largest yet, following claims by North Korea regarding its fourth nuclear test in January and a rocket launch last month that supposedly sent a satellite into orbit.

It seems odd, therefore that no-one is particularly bothered. There is certainly much eyebrow-furrowing taking place at state level, mostly between white men in military uniforms talking in cinematic tones, but among the general public, no-one seems to be too panicked about this increased threat to the human race. The media successfully whips people into a frenzy over ‘terrorist threats’ from the Middle East, but dangers originating from the Far-Eastern part of the globe are frequently played down, mocked even. Like a screaming child, our reaction appears to be one of closing the door and waiting for the tantrum to end. CNN’s Paula Hancocks even gives assurance that such threats are to be “expected at this time of year”, as though the North Korean dictator was simply experiencing a particularly heavy menstrual cycle.

The questionable haircut certainly doesn’t help his case, and reassures us that in Kim Jong Un’s barber exists an ally whose scissors might one day be directed a couple of inches lower. But we are also encouraged into denial by the belief that, even if such a danger is real, there is nothing we can do about it.

Many believe that the only options currently available to the international community are more sanctions and resolutions, with the UN Security Council, last week, passing a resolution to impose the toughest set of sanctions on the country for two decades. They attack 50 per cent of the country’s export market, whilst unilateral sanctions initiated by the US and South Korea seek to completely exclude the country from the global financial system, as well as closing industrial projects employing tens of thousands of North Korean workers.

Yet many believe that such moves risk turning threatening words into devastating actions, and Andrei Lankov, a professor of Korean Studies in Seoul, argues that the regime now has “nothing to lose”. Others claim that sanctions will have little impact on those in charge but will rather starve a population already suffering under tyrannous rule.

There also exist those who believe a ‘firmer’ approach should be adopted, and talks recently took place in the US at the end of February in which a Republican Senator and the Commander of U.S. Forces Korea agreed that military action should be “on the table”.

That North Korea’s threats were issued in response to South Korean-US military exercises, however, suggests that more military bravado is the one thing we could do without. Such military exercises are a display of militarism at its most arrogant and, though they are claimed to be training exercises, they also act as shows of force to display to the opposition that violent tactics will be employed if necessary.

It is therefore understandable that such drills can be seen as being used as much for offensive as defensive purposes, and can easily be manipulated to provide an excuse for “pre-emptive” action. The security dilemma also shows that when one side increases its fire power, the other seeks to match it, leading to scenarios that can result in conflict even when previously desired by neither party.

Though many children respond positively to having their sweets banned or being threatened with a light smack, we must remember that there exist Kevins in the world who remember the time when they were given a black eye, and one day turn from sulking toddler to killer youth. While we certainly don’t want states who take the threat of North Korea less seriously to supply the country with arms (on this point, what father buys their son a bow and arrow, anyway?), to reduce the threat from North Korea, such ostentatious shows of power are not conducive, and short-sighted attempts at military action could prove fatal.