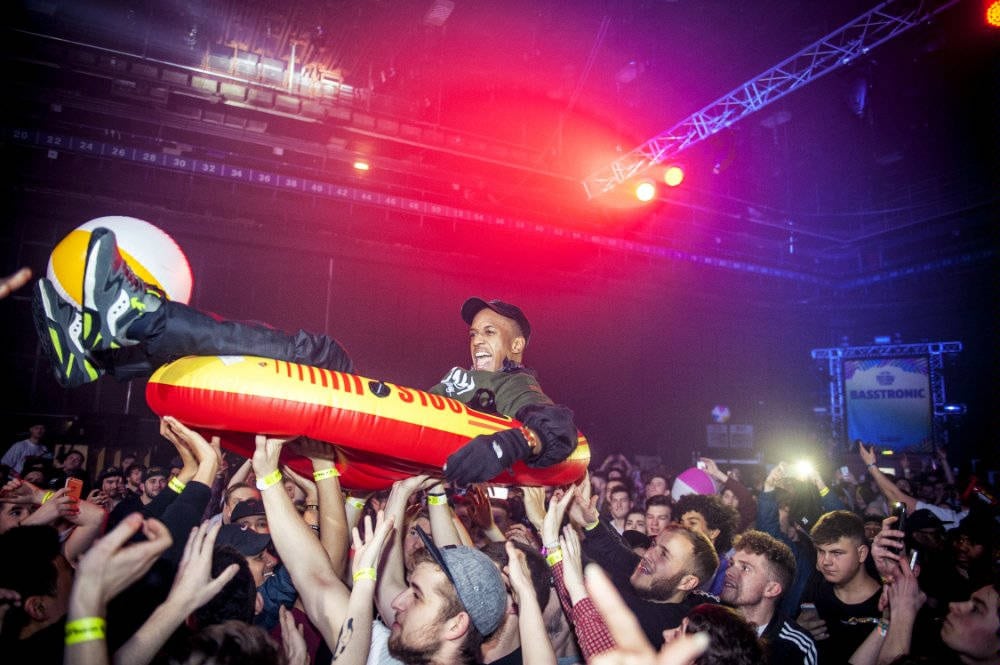 Four rounds, four acts. The rules are to have no repeats of songs in each round—doing so would straightaway result to disqualification. But remixes are allowed. Each act is given 10 minutes each to impress their audience to cheer for them to win. The noise is the voting system, picked up by a special decibel meter that detects the sound frequency, crowning the act with the loudest cheers—in MC Dynamite’s words, “If you don’t want them to win don’t boo—it counts as noise.”

When I think of this sold out night, I think “0161” repeated over and over, rooting for Manchester’s music scene. In Old Granada Studios, where Jeremy Kyle used to be, sat four small stages on each corner—each representative of each act: Made in Manchester, LEVELZ, Dub Smugglers, and BASSTRONIC (fronted by A Guy Called Gerald—best known for his work in the ’80s Manchester acid house scene).

A heavy and pretty intense start, round one went hard with Made in Manchester playing some drum and bass, grime, and at one point mixing up The Fugees’ classic ‘Ready or Not’. Most people in the crowd were just bopping their heads to the beat and feeling it out. The crowd, naturally, were slow to warm up, and dancing didn’t really start happening until the end of the first round. Wearing balaclavas and bandanas, LEVELZ were next to perform. They had it all together aesthetically, and even squeezed in some bantz with Made in Manchester (one of the members held up a sign reading “Made in Chelsea”), and they threw cuddly toys around the stage and swayed them around up in the air above the audience with some sort of fishing line. They paid their respects to David Bowie, shouting “RIP” and mixing up ‘Let’s Dance’ with some dub. This sort of felt out of place, but it pleased the people and it was unpredictable at best, or you could even say they were on another level to the act before them.

Dub Smugglers gave a futuristic feel, producing sounds which felt almost as if you were stuck inside something like a retro video game. They were more electronic-dependent, unlike LEVELZ who had great flow—with members rapping to a smooth and upbeat tempo, but this was refreshing—especially in the first round and it really gave some diversity to the competition. Dub Smugglers were definitely the more sexually charged act, with heavy bass and raunchy beats, it got pretty much everyone dancing along even when their 10 minutes to impress were over.

BASSTRONIC was fronted by A Guy Called Gerald. They decided to go old school and give the crowd a “history lesson” and played dancehall classics like ‘Bam Bam’, Dawn Penn’s banger ‘You Don’t Love Me (No No No)’ and went back in time with Millie Small’s ‘My Boy Lollipop’. A Guy Called Gerald called out to“Wythenshawe” to represent, putting everyone in a celebratory vibe as the 10 minutes progressed into aggressive beats with soulful female vocals until mixing it up all over again.

There were some technical issues with the sound and this disrupted the flow of the competition during the penultimate round. It can’t be hard to imagine how frustrating it was for a live competition, and Made in Manchester made this known. Hiccups continued to happen with BASSTRONIC and Dub Smugglers, too. But this didn’t affect their spirit. It seemed like each of the four acts were looking to enjoy themselves and have some healthy competition. For an event that prides itself as a musical battle, pitting four acts to work up the crowd to win, I felt that the people were friendly and considerate, and they were really just wanting to have a good time and enjoy the live music. There was no hustle and bustle or rowdiness like how I would have imagined when queuing up to get inside. And I didn’t feel like I was getting knocked around or misled with while I nerdishly scribbled on my notepad, worried that I would forget any details.

In the end, the winner of the Red Bull Culture Clash – Manchester was LEVELZ. It was a well-deserved win as they were consistent and strong in each round. Their flow, banter, beats and playfulness set them aside and offered something slick and different. Next up for LEVELZ, they will be sent to perform the June 17th finale at ExCel London, where they will compete with winners from the UK’s leading cities for music.