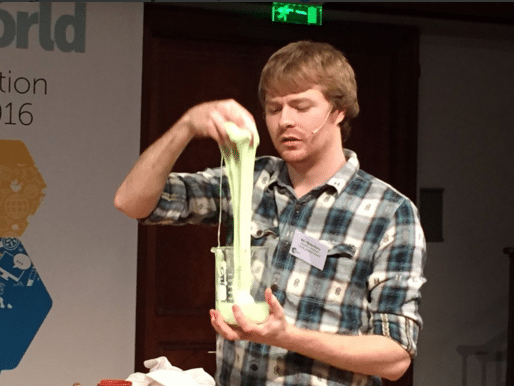 Molecular Biology PhD student at The University of Manchester,  Ben Stutchbury, has won an international science communication competition. The contest was hosted by the magazine of the Royal Society of Chemistry (RSC), Chemistry World. Its aim was to make the topic of chemistry more accessible to the public.

Those passionate about science, writing, and science communication were called upon to enter the competition, after a report from the RSC exploring public attitudes to chemistry revealed that subject is viewed as an isolated field, which was seen to be inaccessible, serious, and intimidating. This stood in stark contrast to the public’s general perception of science as being mostly fun, interesting, and engaging.

The RSC report highlighted how chemistry fails to relate to the wider population, prompting improvements in the way the field is communicated to the public.

The competitors first had to submit an 800 word article exploring a theme uncovered by the research. Stutchbury concluded that establishing why science was tangible and chemistry was not, would help to make chemistry more accessible.

Stutchbury argued that this may be due to the lack of a ‘public champion’ for Chemistry in the mainstream media: Biology and David Attenborough, or Physics and Brian Cox.

Stutchbury said:  “The RSC Public Attitudes to Chemistry Research Report highlighted a number of issues in the way chemistry is perceived by the public. For example, when asked where a chemist was likely to work, most people said “in a pharmacy”!”

“One thing that struck me was how negatively the term ‘Chemistry’ is viewed by the public in comparison term ‘Science’. As chemistry is a huge part of science, I was surprised by how differently they are perceived. I think that the public opinion to the terms ‘Biology’ and ‘Physics’ would be more positive than that of ‘Chemistry’.”

After completion of the essay, finalists were shortlisted, and were required to produce a 10 minute talk explaining a chemistry concept in an engaging way. The five finalists competed for the grand prize in the prestigious Faraday lecture theatre at the Royal Institution.

After his talk explaining the chemistry behind mucus in our bodies, Stutchbury was awarded the Science Communicator award. The £500 cash award comes with publication of his essay in Chemistry World, and the opportunity of work experience with AkzoNobel—a world leader in the Chemistry field.

Stutchbury commented on his experiences of the competition: “It is really fantastic to have won the award, but the most exciting thing was just reaching the final. The opportunity to present in the historic Faraday Lecture Theatre is something I will never forget. The other finalists all gave brilliant presentations and it really showed that the communication of exciting chemistry has a bright future!”