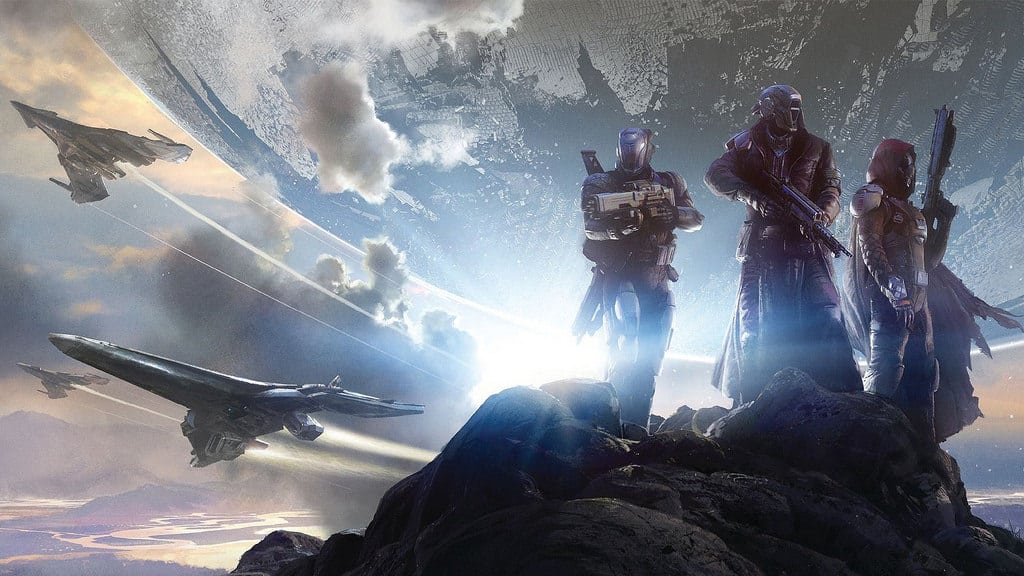 Destiny is one of the most polarising games ever made. For every detractor bemoaning the game’s lack of content and bare bones story, there are an equal number of passionate fans praising the titles top tier gameplay and rewarding loot cycle. Whichever side of the argument you fall on, it is hard to deny that the game has managed to capture the hearts and minds of many gamers from a myriad of distinct backgrounds. Just by looking at Destiny’s many active Facebook groups, it is immediately apparent that this is a game that can be enjoyed by almost anyone. Your fireteam is equally likely to be comprised of housewives and financial professionals as much as the typical demographic of teenage boys and young couples.

The fact that Destiny has not only managed to create but also retain one of the largest and friendliest communities, despite a significant drought of content is indicative of the game’s depth and social features. As such, I believe that Destiny should be considered in its entirety, in order to give an accurate assessment of what new and returning players are in for with the game’s latest expansion.

Simply put, Destiny: Rise of Iron succeeds at reinvigorating the shared-world shooter with some of the best content that developer Bungie has ever produced. The two-hour campaign is for once a particular highlight, centred around the outbreak and the quest to contain the ancient SIVA plague ravaging the Cosmodrome. The new and revamped strikes are fun, and excellently designed, but once again the new raid ‘Wrath of the Machine’ is the centre-piece attraction. It’s all great content, just a crippling shame that there is so little of it.

Admittedly, the downloadable content (DLC) is not priced as high as last year’s The Taken King expansion, but Rise of Iron is meant to fulfill the same purpose: to keep Destiny players engaged. I don’t know what Bungie’s plans are for the future, perhaps we can expect some free content similar to that of Taken King’s lifecycle, but in its current state I don’t see how Rise of Iron can pull this off.

Part of the problem is that the core content in the game—whilst being highly polished—remains largely unoriginal when compared to Destiny’s existing framework. The new enemy type—the splicers—are essentially retextured fallen enemies with only minor variations on their existing attack patterns, and the new patrol area, the Plaguelands, could be mistaken for a snow covered section of the existing Cosmodrome environment. There is no new level cap, no new subclasses, and ultimately Rise of Iron fails to change the way you play Destiny in any meaningful way.

That being said, I still enjoyed my time with Rise of Iron. Destiny’s core shooting mechanics are among the best in the business and there remains a tremendous amount of depth in Destiny’s character development. The fact that you can level up your weapons and subclasses individually creates opportunities to fine-tune your guardian to a tee. Despite being short, the campaign throws some truly challenging battles at you, and the haunting final mission is one of the finest Bungie has ever produced. There is a real sense of character progression throughout the story, which is nicely reminiscent of Destiny’s opening hours. Furthermore, your new companion Lord Saladin does a fine job of narrating a well-worn but coherent tale, despite some groan-worthy dialogue.

Bungie’s choice to abandon previous generation consoles raised a few eyebrows back in August, and throughout the majority of the expansion, it is hard to see how the decision benefits players on current generation systems. Yet this all changed when I finally got to the new raid: Wrath of the Machine. Without spoiling too much this six-player raid is bigger in scope, complexity, and challenge than any raid Bungie has put out before. Whilst the journey to get there is taxing, Wrath of the Machine is easily worth the pay-off.

The expansion also introduces four new Crucible maps, and whilst I could only play three of them thanks to the timed exclusivity deal for PlayStation platforms, I thought that they were well designed, colourful, and flowed brilliantly. Bungie has a real talent for map design and it’s unfortunate that only one new player versus player (PVP) mode—Supremacy,which is essentially Call of Duty’s ‘Kill Confirmed’ mode—is included in the package. Whilst a fun addition, it’s disappointing and somewhat confusing as to why Bungie doesn’t capitalize on its player versus player component in the same way it has refined its player versus environment content. The foundations are solid, and furthermore ripe for expansion.

Despite Destiny’s content woes, one of the reasons that I kept coming back to the game was its sense of community. One time I saw five players sat down in an incomplete circle in one of the social spaces. Puzzled, I walked over and sat down, thus completing the circle. I promptly received a message asking if I wanted to revisit an old raid. I accepted the invite, and before I knew it I was working closely with what amounted to complete strangers in order to finish the raid. We joked, laughed, and groaned at the challenge before us; the sense of synergy that the game evokes between players is unparalleled, at least on console.

Whilst not providing the same amount of content as the previous expansion, Rise of Iron does its job competently if little else. If Destiny has failed to grab you before, Rise of Iron is not going to convince you to return. For new players considering Destiny it is important to remember this: when you buy into Destiny you buy into a fantastic community. It may be a cliché, but the further you get into Destiny the more it goes beyond the sum of its parts.