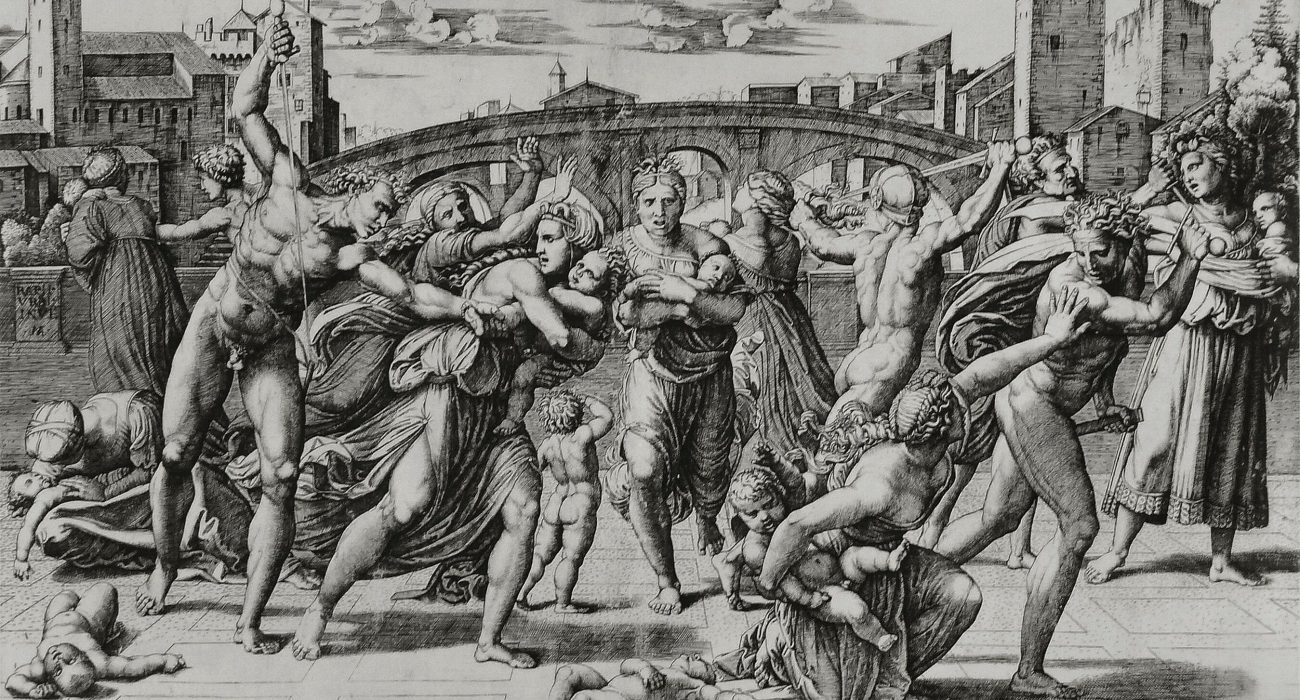 Marcantonio Raimondi - The Massacre of the Innocents. Photo: Wikimedia Commons

Marcantonio Raimondi and Raphael at the Whitworth

Marcantonio Raimondi (c.1480-c.1534) was an Italian engraver, and an innovator of the European tradition of printmaking, while Raphael (1483-1520) was a revolutionary renaissance painter and architect. The unlikely collaboration between these contrasting artists led to some of the most iconic and recognisable printed images in western art.

From Raphael’s designs the two artists created many engraved works right up until Raphael’s death in 1520. These works revolutionised the world of western artistry, and the way we perceive art today.

The exhibition takes the viewer through eight steps of Raimondi’s career; both with and without Raphael. We begin with his first works stemming out of his time at the University of Bologna where he worked under the Bolognese painter, medallist and goldsmith Francesco Raibolini, more commonly known as Francia. Focusing on the theme of humanism the works depict man in their most vulnerable states; nude, sleeping, and in pain.

We then move onto Marcantonio Raimondi’s works born out of his time in Venice, Florence and Rome, where he brushed shoulders with Albrecht Dürer, Giorgio Vasari and Michaelangelo. Heavily inspired by all three artists, Raimondi created engraved copies of Dürer and Vasari’s paintings. His greatest inspiration from these years, however, is said to come from Michaelangelo’s design for The Battle of Cascina which inspired multiple engraved works based particularly on the heroic nature of the male nude in the design.

And now for the main attraction: Marcantonio Raimondi’s work with Raphael himself. Raimondi’s move to Rome signified his longing to work amongst the most prolific living artists of his day. Rome was a hive for ancient sculpture and contemporary paintings alike.

Raimondi’s partnership with Raphael is said to have defined his career and even to revolutionise the European art scene at the time. With Raphael working on paintings and illustrations for illustrious patrons such as the Pope, to work alongside him was a tremendous feat indeed.

Many of the images throughout the exhibition portray universally familiar stories, particularly from the Bible, and Greek Mythology, often fusing humanist learning with Christian piety. These images often depict some form of disparity between the figures involved. The images reveal a sense of humanity even surrounding those beings who are almighty and powerful, reminding us of our equality here on Earth.

This astonishing collection of works is a must-see at the Whitworth Art Gallery. The themes of humanism and Raimondi’s shaping of social values is amazingly ahead of his time. It is quite incredible to come across such an accomplished artist’s entire works, completed centuries ago, and still have it resonate with the society we know today.