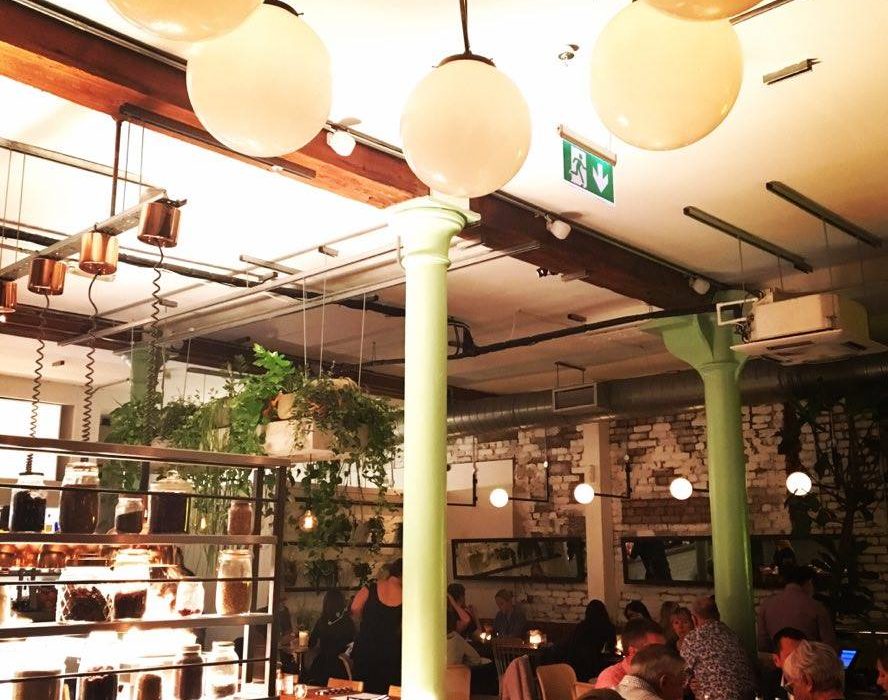 The name Evelyn’s directs my thoughts to something rather classic and traditional. Evelyn’s height of popularity, as a girls’ name, was in 1915, a time so far away my Grandma has not even touched.  However, once I browsed the website, shouts of cumin, lemongrass, and yuzu littered the menu, and to be honest I was quite relieved.

When my eating partner and I found Evelyn’s, just of Thomas Street, and entered, we once again felt a mix of the old and traditional being fused with the new and creative, a scene so apparent in the city’s coolest quarter.  The building’s rusticity hung overhead in the shape of open metal piping which then climbed down the side walls, and as our eyes were drawn to a normal level, we were delighted to see a spotless open kitchen, located in amongst the restaurant’s chic, well-presented tables.

Unfortunately, we were seated on a bar style table that looked out onto the street rather than into the beautiful interior that surrounded us, this caused us both to sit half turned around in order to soak up some of the visual atmosphere. Our welcoming waiter brought over the already looked at menus and scuttled off to get us our drinks order.

Like many Northern Quarter restaurants, Evelyn’s offers the option of ‘small plates’ and ‘large plates’, so, of course, we decided to get a mixture of both. The menu was actually slightly different to the one shown online, but we were not disappointed and went on to order Korean fried chicken, a crispy duck salad, an Asian laksa, and a lamb salad.

Whilst we waited for our food, we both slightly wearily discussed the volume of the music, without wanting to sound like boring third years. As much as we are both impartial to a decent night out, we continue to find the level of volume used in Manchester restaurants recently, to be overbearing and quite unnecessary (what happened to that good old thing called conversation?). The overall vibe, therefore, did not quite do the delicate building any justice.

Our ‘small plate’ starters arrived and our feelings towards each of them differed massively. The Korean fried chicken bowl boasted numerous pieces of crispy, yet succulent bites, which worked well with the included chilli side dip. However, the amount of duck in the salad was disappointing, and it largely consisted of plain tasting leaves.

With mixed first impressions, we were eager for our main dishes to arrive and when they did, we were pleased to see generous sized portions and vibrant colours. On taste, however, we were once again thrown into a state of opposites. The Asian influence Laksa, which consisted of ballotine chicken, sweetcorn, and thin noodles in a liquid broth, was completely flavourless. The broth was under seasoned and entirely lacked any kind of spice, the chicken had unwelcome strings of fat around it, and the dish as a whole was, in our eyes, a thorough disaster. In contrary, the lamb dish was pleasant. The tender lamb pulled apart desirably, and the pearl barley added a healthy yet hearty spin. This dish finally gave us some Middle-Eastern flavours we so dearly love.

Despite the offer, we passed up on dessert due to the rather confusing savoury experience we had just undertaken. Instead, we asked for the bill while we finished our drinks. The steep prices, which we felt were not worthy, added to our slight discontent with the restaurant. We were left, and still are, confused about the hype that continues to surround Evelyn’s. Maybe it’s just that on point lighting?