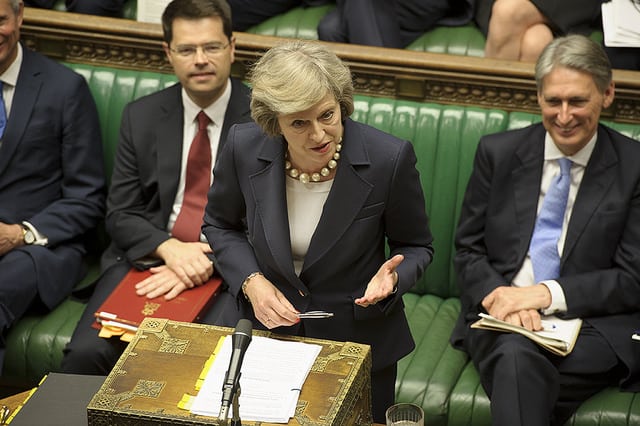 Pro-EU intellectuals must speak out

I am sure that Theresa May was far too busy creating “a country that works for everyone” to have a Halloween party this year. However, on the off chance that May decided to throw a Halloween bash, I hope that one of the guests attended dressed as an embodiment of the pro-European faction of the British Intelligentsia. After all, it would have truly terrified the knickers off our dear Prime Minister, and they would certainly be in with a shot of winning the prize for the most creative costume.

Theresa May and many of those in support of hard Brexit have tried everything to shut out the voice of those opposed to it, many of whom are students or a part of the Intelligentsia, calling them “unpatriotic”, “bad losers” or “anti-democratic.”

They even started a petition declaring that criticism of Brexit should be considered treason after Article 50 is triggered. Surely if these individuals are as in favour of democracy as they claim to be, they should recognise the importance of democratic freedom of expression that allows the political system to be questioned and, therefore, would not try so incessantly to squash those questioning the conduct and outcome of the referendum.

A likely explanation is that pro-European intellectuals are a terrifyingly rational opposition to a chaotic Brexit and, for that reason, pose a significant threat to Theresa May and the Brexit politicians and supporters (if one can even say that Theresa May “supports” Brexit).

Taking Brexit out of the equation entirely, more generally speaking, society and the establishment’s distrust of intellectuals, thinkers and questioners, is a tale as old as time. According to the creation story from one of the world’s major religions, Christianity, the fall of human beings stems from the fact that God caught Adam and Eve eating an apple from the Tree of Knowledge. In other words, according to Genesis, mankind is condemned with mortality. Us ladies are cursed with feeling that our bodies are ripped in half during childbirth, all because they were tempted into wanting to possess knowledge. Perhaps this is a misinterpretation on my part, but that does not a seem like a particularly endearing representation of intellectual curiosity.

So why would the writer of Genesis want to portray this dismissive representation of knowledge? Genesis is not the only piece of literature to present this argument — often the pursuit of knowledge is shown as something threatening, something that is associated with sly behaviour or wickedness.

One of the main characteristics that Euripides gives Medea in order to establish her as an evil character is her unique intelligence and gift for alchemy (forget the fact that she murders her own children). So why does Western literature treat intelligence, and a desire to question the world around us, with such an inherit distain? Is not thinking, and questioning the world around us, a distinct sign of freedom and democracy? Is it not a good thing?

Aside from propaganda, the arts and sciences have always been a threat to the establishment, in any country, under any leader, at any given time period. It is no coincidence that artists and intellectuals that are not openly in favour of a certain regime are usually amongst the first to be shoved in the Gulags, concentration camps or prisons.

Often, when a scientist has discovered something that goes against whichever political system they are living under, they might magically disappear or be found having tragically accidentally fallen on a knife. Luckily we live in twenty-first century Britain, where the worst that can happen to someone who speaks out against a system of any kind is a bit of innocent threatening, perhaps an online death threat or two.

Back to Brexit. The lashing out against, and threatening of, those of us who are speaking out against the United Kingdom’s leaving the European Union has increased in the aftermath of the referendum — as has the racism that has exploded in our society.

Unfortunately, this distrust of thinking, and questioning, has been in the bubbling core of our society long before June 23rd 2016. It does feel as though any attempt to criticise Brexit, or rationally discuss the various options that the United Kingdom should be exploring, is simply shot down by hate, anger and reverse snobbery.

Students who speak out are accused of being “lazy” because their age group had the lowest turnout. But chances are, if they feel strongly enough about the subject to actually write an article about it, they probably voted on June 23rd.

However, this threat, and suspicion, has not discouraged the intellectuals and students throughout history, and should not discourage them now. So, if anyone did turn up at Theresa May’s door this Halloween dressed as any 21st century intellectual, she may have slammed the door in your face but take it as a compliment, her malice is out of fear of what you can do.