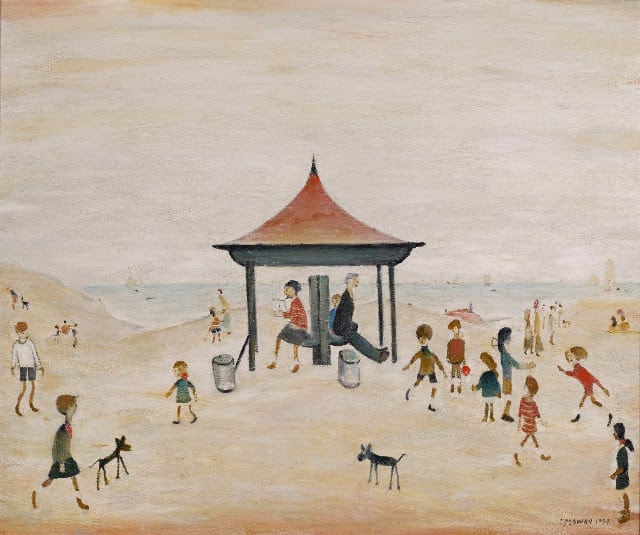 Much to the delight of fans of LS Lowry, the infamous Lancashire-hailing industrial painter, one of his rarer works has recently been placed on display at the eponymous Lowry gallery in Salford, thanks to its anonymous owner lending the painting for one year.

‘On The Sands, Berwick’, painted in 1959, was originally part of the Royal Academy’s posthumous exhibition in 1976, celebrating Lowry’s resounding legacy. Since then it has remained in private ownership, until the painting previewed at the Granary Gallery in the titular seaside town of Berwick, and later made its way to Salford’s own Lowry gallery.

The painting is one of approximately 20 drawings and paintings Lowry produced of Berwick, a seaside resort he is said to have enjoyed visiting regularly between the 1930s and 1970s. It depicts a number of adults and children playing around the pavilion in the centre of the composition, with its bright, sandy backdrop providing quite the contrast to the harsher, more angular depictions of grey industrial landscapes throughout the North West that Lowry is perhaps best known for.

The aforementioned pavilion was repaired by the local council after falling into disrepair some time in the 1990s, with the Lowry connection being hailed as the motivation behind this. It now features as part of Berwick’s Lowry Trail.

Now that the painting features in Salford, large crowds can be expected, predictably those who have never seen it up close and personal before. Lowry’s huge notoriety within Manchester and its surrounding towns is undeniable, with his infamous ‘matchstick men’ style and brooding landscape paintings gaining him countless admirers and cementing his immeasurable cultural influence.

‘On The Sands, Berwick’ is just one of many of the works which created this legacy, so be sure to see it at the Lowry while you have the chance.