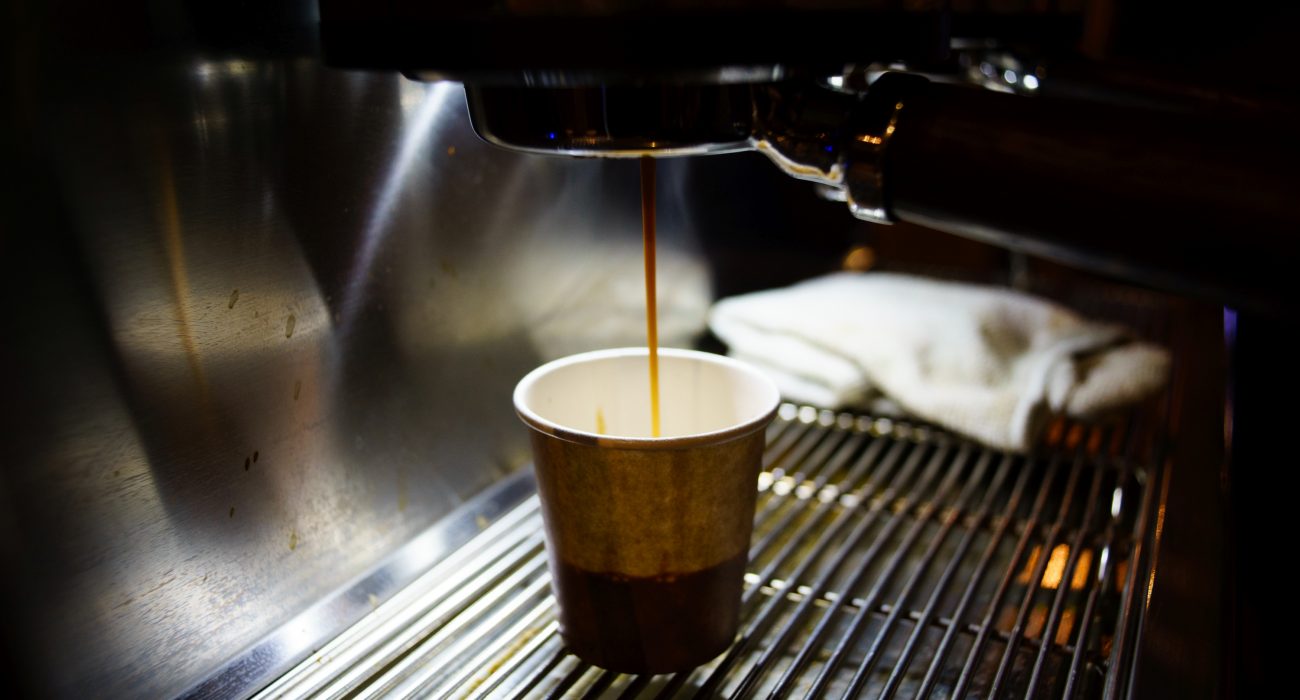 “This coffee thing better not be outside, Alec.”

Cup North, Saturday the 5th of November, arctic temperatures as we boarded the tram: I could not help but agree. Arriving at Victoria Warehouse (a short tram-ride away from Piccadilly Gardens), it initially appeared that the coffee thing was, indeed, outside; however, our fears were quickly abated.

When I bought the tickets for Cup North, I was not really sure what to expect. The website seemed very industry focused and drinking enough coffee to warrant the ticket price (£10) seemed like a logistical/dietary nightmare. Nonetheless, we soldiered on.

Within minutes of arriving, we had drinks thrust into our hand by someone from Brew Tea Co. It was English Breakfast (I think) and while it was OK, we quickly drained our sample cups to escape the grasps of the exhibitor’s pitch.

Cold brew was my main interest at the event: I read about it on the internet several months ago, and I had meant to make my own over the summer. Totally having forgotten to do so, the logical thing of course was to try it at Cup North, courtesy of Artemis. For those unaware, what separates cold brew from regular coffee is that you do not add heat in any part of the brewing process. Instead, you steep coffee grounds in water for 16+ hours and then filter it before drinking it cold. The advantage of this process is that, supposedly, you get a completely different flavour.

In practice, cold brew was everything the internet told me it would be. I’ll admit, I was sceptical that it was just a BuzzFeed summer fad but honestly, it is completely different. They had 3 different coffees on and each had a very distinct flavour in a way that coffee I make at home generally doesn’t. Artemis were selling bottles of their cold brews but also had “nitro” brews available. The twist here was that they add nitrogen gas to the cold brew, imbuing it with draught beer like qualities. One of the coffees they had was particularly different, being made from “cascara”, sometimes known as coffee cherries. Cascara is distinct from normal coffee as it is made from the skin of the bean, rather than the bean itself. The result is a fruity taste unlike any other coffee I have had. The regular cold brews were more recognisable as coffee, but the advantage of cold brew is that you get a lot of taste without any of the sharpness or bitterness of regular coffee, worth a try if you can find it.

One of the interesting things on offer at the event was a workshop being run by Heart and Graft (a Manchester-based roastery) to teach attendees more about the flavours that make up their coffee. We drank a few different types of acid (citric, malic, tartaric and lactic) and tried to identify what they taste or feel like, followed by tasting some more complex flavours (such as blueberries and molasses).

After trying the individual elements, he made us an espresso which was supposed to have pineapple-caramel flavours: the pineapple was definitely there although it was quite overpowering. With the workshop, there was definitely an element of “I’m tasting this because he told me I should”; that said, I’ll pay more attention to what my coffee packets say I should be tasting in the future.

After Heart and Graft came Kokoa Collection who, unsurprisingly, were serving hot chocolate. They had a range of different single-origin hot chocolates ranging from white up to 82 per cent, served like a latte with steamed milk: I opted for 70 per cent as a good middle ground and Pip went for 82 per cent. While he was making our drinks, the exhibitor let us try our hands at grinding cocoa nibs to make chocolate, apparently it was too cold in the hall to work (though maybe our technique was just bad). The hot chocolate itself was excellent, both were very flavoursome and the difference between the two varieties was obvious. I could not help but buy a bag to make at a later date.

After the event, we spoke to a volunteer who has worked each of the 3 years of the festival. Initially she got involved because the tickets were too expensive; however, volunteering was fun and relaxed and, “you also get lots of free coffee and you will be well-fed.” Furthermore, volunteering for Cup North is relatively easy, “all you need to do is show interest.” She found that Cup North has changed to have a more professional atmosphere this year, making the whole thing seem more “official.” Although this meant more attendees overall, she felt that there was less opportunity to have decent conversations with the exhibitors.

We definitely found that some of the exhibitors launched into their sales pitch very quickly after approaching their stall. Obviously, they are there to sell their product, however it was off-putting and led to us leaving certain stalls earlier than we might have done. That said, the reception of the event was good and attendees ranged from baristas to “people who just love coffee and cakes.” Overall, attendance was good, people seemed to enjoy themselves and the event was another success.

To anyone who has been to a beer festival, something like Cup North might seem strange. At a beer festival, (at least as far as  I’m concerned), you are intended to enjoy those drinks at that time, at that location. With Cup North though, the main focus seemed to be on taking something away with you when you leave and clearly, this affects the approach of the exhibitors.

There were other aspects to the event that we didn’t really see, such as “Tamper Tantrum” (the ‘Ted talks of coffee’) and the Cupping Lab (competitive coffee tasting) which I considered entering but we were too late. While the ticket price only covers entry, most of the exhibitors were willing to let you try their product so it was a relatively cheap, though high quality,  event. I would recommend it to anyone with an interest in caffeine.