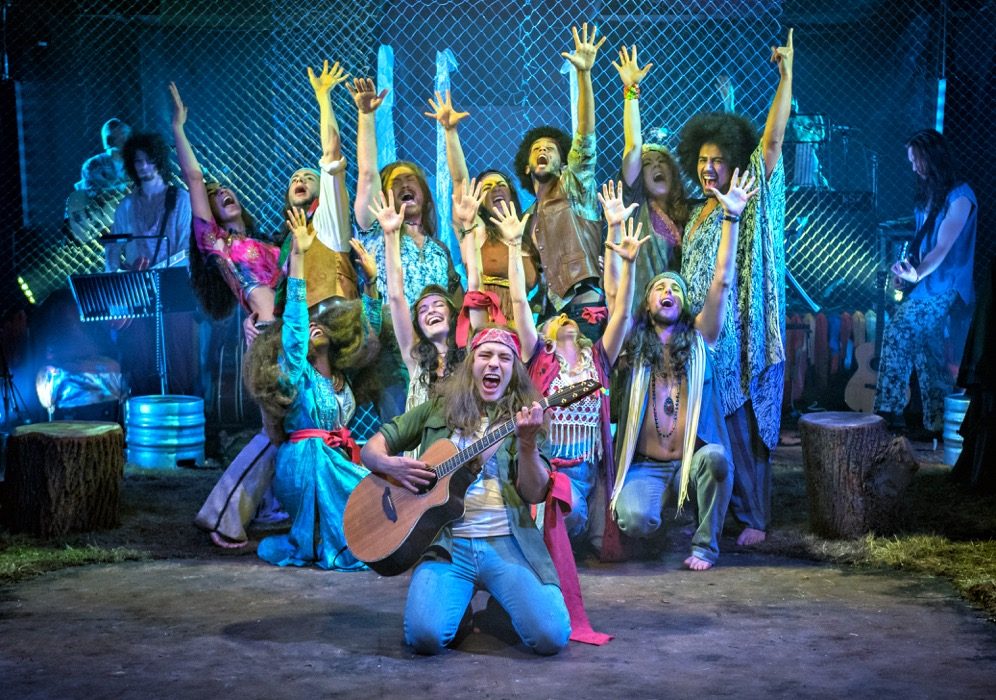 Set in 1960’s New York the audience are immersed into a ‘tribe’ of hippies, who preach love and peace against the backdrop of the Vietnam War.

Despite being set in the past the play resonated with our current political climate. Calls to see past race and to avoid needless wars seem more potent now than ever with the election of Donald Trump as US President.

The musical explores the diverse bohemian lifestyle of a group of hippies living in the East village. It is extremely emotive, heartfelt and features many charismatic and eccentric characters not least the free spirited Berger (Ryan Anderson).

The main storyline follows Claude (Robert Metson) as he has to decide if he wants to resist his drafting to Vietnam.  Hair showcases the sexual revolution and rebellion against both the war and conservative society that occurred during this decade.

This musical is not for shy or prudish theatre goers. Be prepared to have your hair ruffled, sat on and draped across by the cast.  Drugs and sex is the dominant discussion of the day. Of course there is also the famous nude scene that ends Act 1 to look forward too.

You cannot help but smile and laugh whilst watching this production; you are drawn into the world of the musical through the intimate setting of the trust stage.  There are countless moments where you want to sing and dance along, as the production excellently removes the barriers of the fourth wall.

However, the play was not all happy times as it touched on more serious issues, such as pregnancy, war, racism and colonialism, even if only fleetingly.

The musical is powered by quirky songs and equally quirky costumes, although you would not be surprised to see some of these outfits being paraded in Fallowfield.

The vocals of the entire cast were phenomenal with many performances physically giving me goose bumps, most notably by Shekinah McFarlane as Dionne, Laura Johnson as Sheila and Robert Metson.  The only drawback of the show is that the vocal clarity was not always the best as many lines, although sung beautifully, were not understandable.

Yet these few bad trips did not dampen the overall high the musical left the audience on.  This overall feel-good mantra could not be more perfectly expressed than the ending, where the audience get physically invited to join the cast on stage to sing and dance to a rendition of ‘Let the sun shine in’.

The euphoric notion of the hippy lifestyle was not just embodied by the music and cast, but also the set design. The stage was rimmed with grass and the walls covered in coloured ribbons along with a fence at the rear of the stage. The fence separated the musicians from the cast, but was also used to create some beautiful imagery.

The musical left you with a feel good glow, as you cannot help smiling as you leave the theatre. I left with the optimistic thought that I really should not be worried about other people’s opinions of me.

In the words of Margaret Mead’s character ‘be free, no guilt, be whoever you are, do whatever you want to do, just so long as you don’t hurt anyone’. Andrew Patrick-Walker really is comedy gold in this part.

You can get your own high by watching Hair the Musical at Hope Mill Theatre. Get your tickets here.