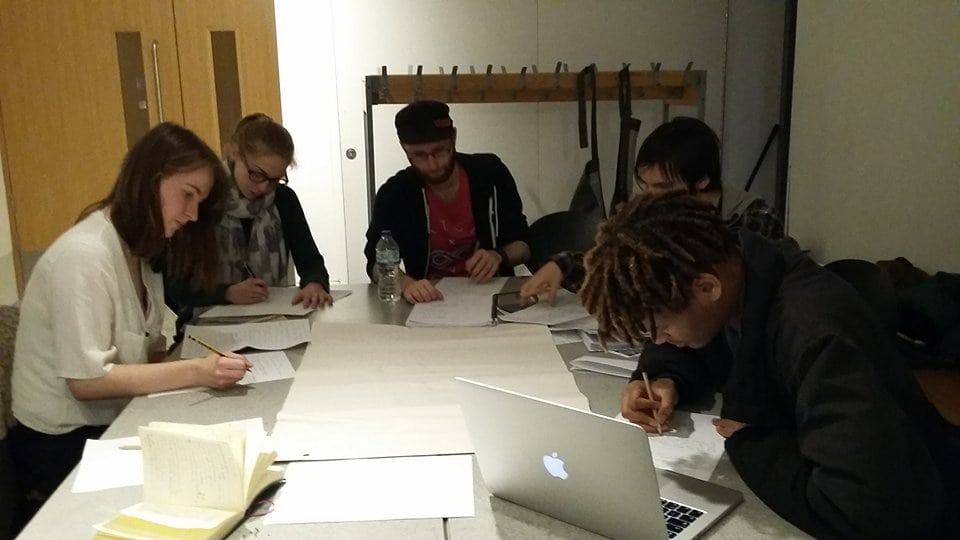 Why Manchester does not need your poetry ‘crown’

On the 15th of January 2017, the Manchester Evening News published an article stating the reasons why Manchester should be ‘crowned’ for its poetry. On the surface level, the article seemed to shed light on our wonderful city’s creative scene and celebrate its poets, but it quickly became apparent that the poets of Manchester were not impressed. ‘RW’ commented “Why does this list look so academic when Manchester actually has an exciting scene?”

Manchester Evening News, asked a lecturer and poet to address this issue, so I thought it only fair we gave the other poets of Manchester a chance to speak.

Elizabeth Gibson, student and poet, stated that the article left out the wonders of Manchester Literary Festival:

“I’ve been a Digital Reporter for Manchester Literature Festival since 2012 and it is one of the peaks of my year. Not only have they showcased many excellent poets, but they approach events from a new angle, often combining person and place to create something unique. From Simon Armitage talking softly about the sea in the beautiful Central Library, the audience silent and mesmerised, to a diverse group of Spanish poets igniting the intimate space of the Cervantes Institute — the Festival creates memories and presents poetry in exciting and thrilling new ways.”

“As someone who moved to Manchester to undertake a Creative Writing MA at UoM, and is a current PhD Candidate at MMU, I can categorically state that the universities do not deserve the credit given in the article for the bustling live poetry scene in Manchester. They have a hand in why there are so many great writers living and writing here certainly but to overlook grassroots operations is foolish. I perform and host at a poetry, live literature night at least once a week. This week: I have performed at Verbose in Fallowfield, which welcomes all spoken word but has a flash fiction focus. On behalf of my feminist poetry collective Stirred I ran a poetry workshop, and have been on the open mic for Bad Language which has been running since autumn 2010, like Stirred, and has a fiction focus again welcoming all forms of spoken word. That is a typical week for me. I could never have imagined that before I moved here.

“There are not one but two (that I know of) experimental poetry nights, The Other Room and Peter Barlow’s Cigarette, there is Evidently in Salford with a performance poetry focus, there is Beatification in Withington with a Beat Poetry vibe. Contact Theatre and Home showcase exciting live poetry shows from the most diverse range of poets. I don’t have space to map out all the events that I know of here, that is how vast it is.

“My event Stirred Poetry has in the last six years surprised me we have a feminist focus and work on encouraging and providing a space where especially women, queer people and people with mental illnesses feel like they can share their poetry the fact that we continue to exist and pack out a venue with such a niche idea is testament to the appetite for all forms of poetry in Manchester; but just remember look outside of the universities, they play their part I would never have moved here otherwise but there is city wide poetry happening nearly every night, sometimes more than one event a night, we have the biggest scene outside of London and those of us who work hardest for the poetry community for little to no financial reward should be mentioned.”

Sarah Clare Conlon creator of Verbose and head of the Literature section at the Creative Tourist stated:

“I was pleased to see an article in the MEN about poetry in Manchester, but was immediately struck by how university-centric it was. Not one of the entries picked by Adam O’Riordan (as it happens, the new Academic Director of the Manchester Writing School at Manchester Met) was independent of one of the larger establishments; even Poet in the City featured MMU’s Helen Mort on the bill.

“It might have been nice to mention the great live lit and spoken word scene in Manchester, and how many established as well as one-off events there are. Stalwarts like multi-Sabotage Award-winner Bad Language, Evidently (hand-picked by Guy Garvey to showcase their wares at last summer’s Meltdown Festival on London’s Southbank), exponents of the experimental The Other Room (nine years old this spring), Stirred and Pen:chant at 3MT, Speakeasy and Beatification in the ’burbs…

“Yes, there are a lot to list, and maybe that’s why they didn’t, but to not even give a nod to the amazing scene of live lit seemed a little, well, rude. Aside from the resident nights, there’s a regular turnaround of visiting speakers, not least through Manchester Literature Festival, which has been going under that moniker for a decade (bursting out of the chrysalis of the Manchester Poetry Festival). No mention. No mention of the invaluable work of the likes of Young Identity at the Contact, or community events, reaching out to those less engaged in the arts, such as Scribble Festival organised by Cartwheel. No mention of how big the live lit scene is, and how many students and former students of the universities support it.

The evening before the feature was published, I was one of 26 performers at the Manchester leg of the North by North West Poetry Tour, bringing together writers from around the region for specially commissioned collaborations – another example of how creative the independent scene is. Verbose turned two last week, once again welcoming three curated headliners and ten open micers to its stage. For the uninitiated, I’m afraid Adam’s piece might be off-putting — there’s more to live lit than lecturers’ launches.”

“It could be said that Manchester’s deep and rich commitment to poetry is so nationally significant and regionally pioneering solely because of those driving forces in the academies and universities, but they don’t function in a vacuum. They are responding the scene, built by volunteers and people investing years of graft to contribute to the intangible spirit of Manchester poetry. People like, amongst hundreds others, Evidently, Bad Language, Young Identity and Flapjack Press.”

It would be challenging to manage to fit the scope of Manchester’s expansive poetry scene into one article, as I’m sure Adam O’Riordan found, but I hope here we’ve levelled the playing field a bit, as Ciaran Hodgers states: “Don’t mistake, our institutions are important to us. We’re proud of them, but it would be shameful to forget the gentry when crowning this city the poetry capital of the United Kingdom.”