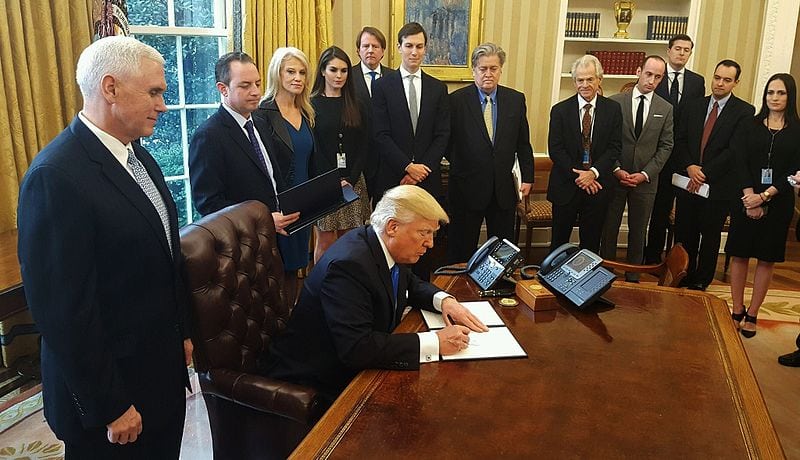 Photo: Office of the President of the United States @ Wikimedia Commons

Right away, he was outspoken. Right from his very first speech: “They’re bringing drugs, they’re bringing crime”, Donald Trump said of Mexican immigrants, announcing his presidential candidacy. “They’re rapists.” 16th June 2015 might have been the genesis of a movement that cumulated at the election of President Trump. It was not, however, the genesis of American support for mass deportation. For that attitude had already been building on both sides of the fence for decades.

In 1996, the Clinton administration established a new series of laws which profoundly affected the enforcement of immigration controls. The year following the deadly 1995 Oklahoma City bombing, the Antiterrorism and Effective Death Penalty Act was presented as a measure to prevent future attacks. This law also paved the way for unbridled rights abuses against immigrants and refugees. Later that year, the Illegal Immigration Reform and Immigrant Responsibility Act also modified US immigration laws enormously. This granted the government greater authority to detain and deport by eliminating key defences immigrants could use.

These laws established a dangerous precedent: one of broader grounds for deportation and harsher penalties for illegal entry, thus increasing powers for both the federal government and local law enforcement agencies. A 2016 report from the Human Rights Watch concludes that these “terrible” laws “rip apart” families and “fast-track deportation”, before adequate consideration from US authorities can take place. If only the acts were as far-sighted as they were lengthy in name.

Many of these relentless revisions authorised under Clinton were not fully deployed until the aftermath of the 2001 terrorist attacks, which gave President Bush a strong mandate to do so. Under Bush, the sharp increase in rate started by Clinton continued to grow. Making full use of the 1996 enactments, Bush became the first President to deport one million people. Then two million. Not only were the raw figures shocking; so too were the methods.

Headline-grabbing workplace raids were staged: high-profile, coordinated operations using advanced technology and SWAT team helicopters. Unlike the strategy of penalising employers who hired undocumented immigrants, these physical raids were highly likely to lead to criminal charges and deportation for the undocumented individuals themselves. Bordering the realms of propaganda when covered in the news, this sensational style of hands-on busts increased general American inclination towards deportation.

In the run-up to the 2008 election, the Democratic Party shifted in this same direction, too. Democrats opposed Republican extremities with moderation in an attempt to woo a fruitful centre ground. By the time their victory was claimed, the movement towards mass deportation was already well and truly in motion. President Obama deported more people from the US than any other president. From inauguration to departure he expelled more than 2.5 million people from the country’s borders. Instead of reversing, Obama accelerated, increasing the immigration control enforcement budget by 300 percent.

It was claimed by this administration that most of those deportees were people with scorning criminal records: felons, threats to America. However, a 2014 study showed different. It revealed that two thirds of deportation cases involved people who had only committed minor infractions, such as traffic violations, or no offence at all. In fact, only 20 per cent of the total deported had been convicted of offences which could be described as “serious”. This use of rhetoric, characterising all deportees as dangerous criminals contrary to fact, is what truly sought to normalise this obscene human expulsion.

There is no question that President Trump’s ideas and policies towards immigrants are severe, even compared to past records. Trump and the Republicans clearly intend to get rid of as many of the country’s 11 million undocumented immigrants as they possibly can. However, those who fear a Trump presidency may normalise his extreme views often do not see that the normalisation of mass deportation predates Trump entirely.

It is a peculiar viewpoint that America was “already great” before Trump — an implication put forward by Hillary Clinton. Perhaps it is not a viewpoint afforded to the vast majority of immigrants, undocumented or otherwise, living in the US today. As the chosen successor to record-setter Obama, Trump has inherited the most sophisticated human expulsion machine in human history: legally robust and well-resourced. On this foundation he has simply built one level upwards. For two decades now, mass deportations have been as American as the blues.

From the turn of the 20th century until 1996, the US had removed 2.1 million people from the country. The number of people removed in the two decades since Clinton’s enactments was more than double this. These “third way” positions have provided Republicans a platform to build on: founding, perpetuating and exacerbating. Rather than one-sided right-wing reconciliation, perhaps what is instead desperately required is an offer of genuine opposition; people who will truly seek to dismantle these systems in motion and not just talk about them as if the are not in motion at all.

Much like (allegedly) many of Trump’s former employees, the true builders of Trump’s deportation policies seem to be left thankless. Steps must be retraced, and when power is resumed by Democrats, a repeat of these mistakes must not be allowed. For it is not only the issue of mass deportation that has become normalised under Democratic watch. So, too, have war by executive order, kill lists, and corporate-sponsored legislation. President Trump’s plans may be severe, but they are by no means anything new.