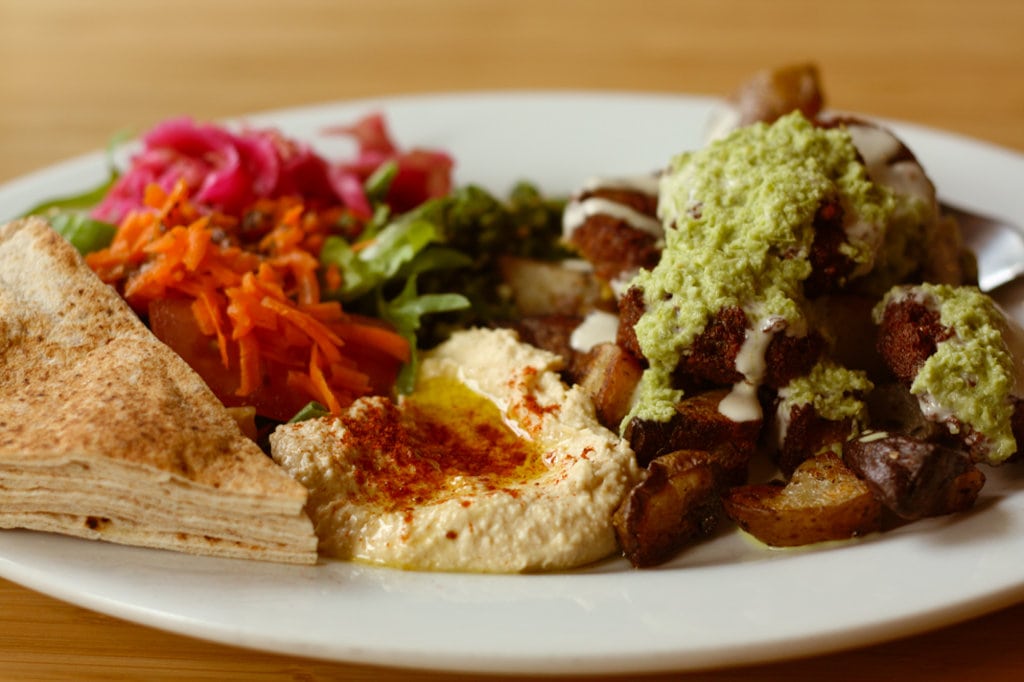 Meals Out with an Allergy

We all know meals out are brilliant, but for people with food allergies they can also be a huge pain. Depending on the severity, you can end up with discomfort, sickness, or even anaphylactic shock and possible death.

Before you even go into the restaurant you have to look at the menu carefully to gauge whether you can safely eat there, and there might even be whole cuisines you have to avoid  —  for instance, I have a nut allergy, which usually means curries and Chinese food are out of the question.

To make things even worse, the conversation you need to have when ordering with a severe allergy is usually an embarrassing, awkward affair. Servers are often blank-faced or confused as to why you are asking if, say, a margherita pizza has nuts in, when it obviously should not. A lot of the time they simply do not know, meaning you have to go elsewhere and go through the same frustrating process all over again.

Allergies are on the rise in the UK, with Allergy UK estimating that the number increases by five percent every year, and from 1992 to 2012 there was a 615% increase in reported cases of anaphylactic shock. According to YouGov, one in four households now have a member with an allergy or intolerance. It’s not known exactly why the number of allergy sufferers is on the rise, but theories include rising standards of hygiene, as well as our increasingly varied diets as cuisine from around the world becomes more popular.

With all this in mind, we thought it was important to look at five different restaurants and bars in Manchester, both to see how well Manchester deals with allergies, and to perhaps show how difficult it can be for those afflicted. My allergy is incredibly serious, which I believe is a strong test for restaurants, as if I have even a trace of a nut I will go into anaphylactic shock and possibly die.

In every place we went I was told that they could not completely guarantee that I would be alright — this is largely to protect themselves legally — but as this article exists and you are not reading an obituary, I clearly came through OK, and I had some brilliant food along the way. This is a good sign, and it shows that allergies in Manchester are being treated seriously, and if you suffer from one some places can be difficult and you still always need to be careful, but you can eat in a wide variety of places without having to worry too much.

Our first port of call was the SU — we fund it, so those of us with allergies should be able to eat there safely. Fortunately, the staff were accommodating, and although they made the usual claims that they could not be certain the food would be nut-free, they said they would tell the chef to take extra care. The menu is relatively standard pub fare, so is likely to be free from most allergens, apart from perhaps some of the desserts.

The food was nice too; the burger was thick and satisfying and the chips were the exact right level of crispiness, making it superior to the standard hyper-processed Wetherspoons equivalent. However, this is reflected in the price — a burger, chips and a pint cost around £9, which is certainly not bad, but not hugely cheap either. Despite this, the SU bar is definitely worth a visit, and if you have an allergy you will be in safe hands.

This relatively new Greek deli and takeaway is in the middle of Fallowfield, next to nightlife stalwart Venice Pizza. It is also the place where I thought I was most likely to die. The staff seemed confused by my questions, and it took a while for them to realise what I meant. Their desserts were also crammed with nuts and out on the counter, which is always a bit worrying. Despite these concerns, however, once they understood I had an allergy they clearly took a lot of care, and although I was a bit uncertain the whole time I was there, it was ultimately fine.

Whilst the process of ordering was awkward, the food itself was amazing. We each had a slice of spanakopita, which is a warm pastry filled with spinach and white cheese. The pastry itself was flaky and crispy, and the filling was just right — spinach can easily be overcooked, soggy and bland, but it mixed perfectly with the cheese to make a great side. For the main, I went for a pork gyros, which is a pitta bread stuffed with pork, salad and chips. The whole thing was lovely — the chips were covered in herbs, the pork was soft and the salad — aswell as the deli’s titular tzatziki —  gave it that vital extra touch. It was cheap too, at just £6 each. Overall then, Tzatziki’s is definitely worth going to, even if you have an allergy  —   the initial conversation may be a bit tricky, but the food is so good and so well priced it more than makes up for it.

Tucked away in Chester Street near MMU  — though there is also a branch in the Arndale —   Pancho’s is brilliant in just about every capacity. You choose exactly what you want in your burrito going from main filling to salsa and sauces. This is usually a massive pain if you have an allergy —  you need to ask about every single part. However, when I first asked, the manager was called over who immediately assured me that nothing had nuts in whatsoever. He quickly added that “you can never be completely sure” but it was definitely the most comfortable I felt in any of the places we visited. For other allergies, it may be more difficult, but for me it was perfect, and they did not seem to have any food that obviously contains any common allergens.

The burrito was also by far the nicest thing I ate at any of these restaurants. It was simple, unfussy and every element was prepared to perfection. I opted for slow-cooked beef, which was exactly right;  perfectly tender but still full of flavour. The guacamole was also great, and unlike many other similar establishments it was included with no extra cost. The salsa provided the right amount of kick without being overpowering, and the rice and beans filled the whole thing out without lessening the taste in any way. At six pounds for a large burrito, Pancho’s is not quite the cheapest, but it is still incredibly reasonably priced, and with the staff being so good about my allergy I cannot recommend it enough.

The obligatory high-end restaurant —  they had bottles of champagne going for up to £420, which was sadly slightly out of our budget —  Al Bacio is a decent Italian that sadly is not quite up there. They are, however, relatively good about allergies. I asked the waiter about the meal, and after he stood there for an uncomfortably long time he went and checked with the chef, before assuring me it was all fine. A bit awkward, but absolutely fine.

Absolutely fine is, however, also the most that can be said about the food. The garlic bread with mozzarella we had to start inexplicably alternated between being very nice and tasting of literally nothing with every bite. I had a calzone for my main, but they tried to put too many different things in – it had cheese, tomato, mushrooms, spinach and chicken, and all I could really taste was soggy, overcooked spinach  —  for over four times the price of a slice of spanakopita at Tzatziki’s. The most my friend could say about his penne al arrabbiata was that it was “sufficiently heated,” though he did insist it was nice. The food would have been good at a lower price, or in a less classy environment, but at such a high cost —  most mains are around the ten-pound mark —  at best  you hope for that bit extra, which sadly Al Bacio was lacking. To finish off a somewhat disappointing evening, both my friend and I felt incredibly ill after eating, and although it thankfully was not an allergic reaction, it was unpleasant.

Finally, we visited the Withington cultural mainstay Fuel, which puts on a wide variety of gigs upstairs, as well as serving great vegetarian and vegan food downstairs. Similar to the SU, they were great for allergies — immediately checking with the chef, and confirming that whilst there were nuts in the kitchen, there were no nuts in the food I had ordered, and the chef would take extra care.

The food at Fuel is always lovely. I went for the halloumi fish and chips, which was brilliant —  the halloumi was covered in delicious, crunchy batter and the cheese itself was incredibly soft:  just on the verge of melting but still keeping its shape and texture fantastically. The chips were nice and thick, cooked with the potato skins still on, and the salad had a great dressing. It was similar in price to the SU as well, with the food costing £6.20 each, and the cheapest pint   — their own, incredibly nice ‘Fuel lager’ —  is £3. However, Fuel is definitely the superior option, with the food being more unique and better tasting, better drinks available, and the café itself is just a great environment to be in. They clearly take a lot of care with allergies too, so I highly, unequivocally recommend it to anyone, no matter how much you like meat.