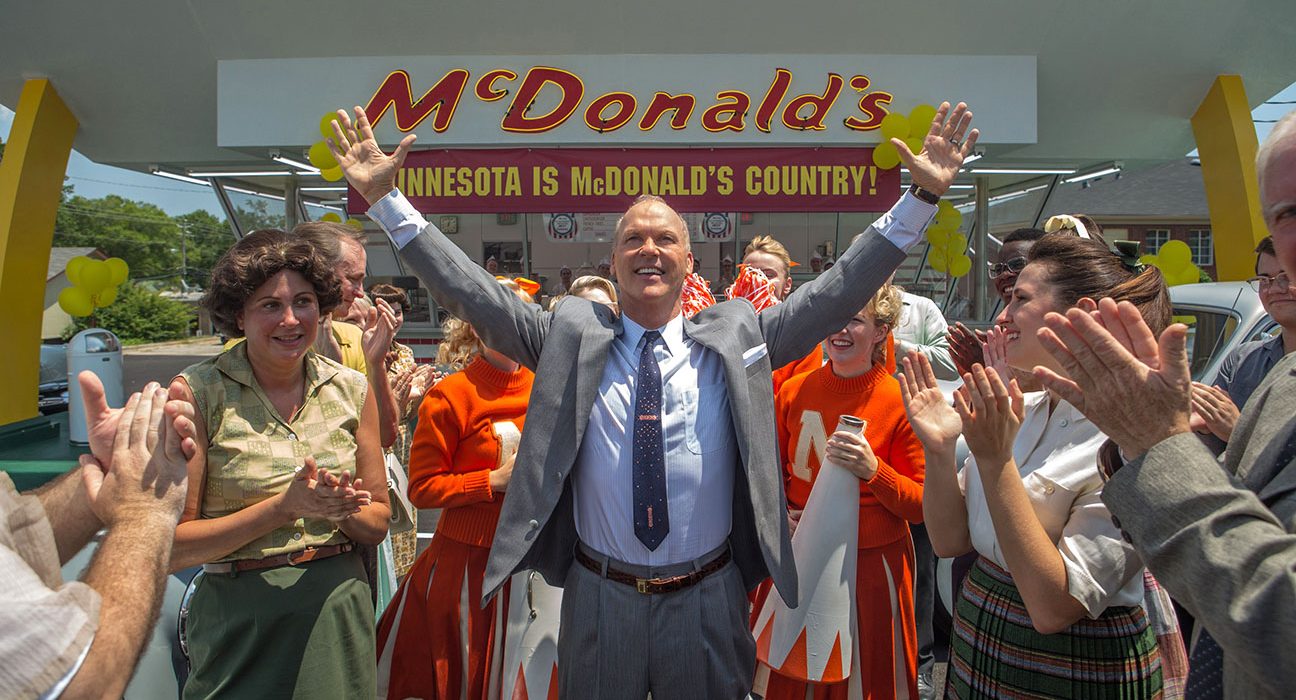 The idea that John Lee Hancock’s latest film was probably just another narrative about making it in America meant that my anticipation for it was rather low. But as the film unfolded I was caught off guard by its surprising density.

The Founder —which has interesting ironic undertones — explores the conceptual origins of fast-food and the empire of the food-chain McDonald’s. It is 1954 when we are introduced to the insatiable salesman Ray Kroc; convincingly played by Michael Keaton. Struggling and fast-paced, he is the embodiment of the free market system and good old American capitalism. Unsuccessfully attempting to sell milkshake makers to diners, an order of eight from a San Bernardino burger stand piques his interest. What distinguishes this thriving restaurant from the ones that struggle to sell a single one? He drives all the way from Illinois to find out.

The stand, of course, is the original McDonald’s. The whole concept of the busy place confuses Kroc, he can’t seem to grasp that his food is presented to him almost instantaneously after ordering it, or that no crockery is required, or that he can eat it where ever he pleases. The movie addresses the shift of fast food and the initial learning curve consumers experienced superbly, and it is at this point that we first encounter with the McDonald brothers. Featuring terrific performances by John Caroll Lynch (The Zodiac) and Nick Offerman (Parks and Recreation’s Ron Swanson) as Mac and Dick, they manage to convey a down-to-earth pair who simply strive to have their own piece of the American Dream after years of persistence and hard work. Except they came up with a notion that would revolutionise America, and they didn’t even know it.

Over a particularly well shot scene of dinner between our three main interests, a fascinated Kroc listens to the brothers recount their long and arduous process to coming up with their unique system. Hancock unfolds the brothers’ past through a series of flashbacks of their thirty-year struggle. The story rises to an electric climax as they calmly come to explain their Eureka moment by pinpointing the weaknesses of competitors, such as poor quality food and slow service that attracts undesired clientele — here it is teenagers that are the problem. It is Dick who localises where they are losing and could potentially save time and money. From past experience, he assesses that certain items are guaranteed to sell, and by pure logic decides to strip the menu down to the basics such as hamburgers, fries and milkshakes. The next point is a stroke of genius, simultaneously in the film-making and in real life, as the scene shows Dick arbitrating his staff around a mock-up chalk kitchen, manoeuvring it over and over in order to create their pioneering time-effective system. This is the stuff capitalist dreams are made of.

Concise, minimal, and easy to keep cleanliness and quality in check, the McDonald brothers are perfectly content with their creation. But Kroc thinks differently, and has the gut feeling he has stumbled upon a rare opportunity. His love for business immediately latches onto the fact that the McDonald’s structure can be endlessly replicated, urging the brothers to “franchise it”. Here the direction puts the viewer in a conflicted spot, aware of the potential Kroc sees, yet faced with the brothers’ sincere attachment to their creation and high-quality standards. Soon enough, Kroc comes up with just the right hook to reel them in— American values. Each town he drives by has 2 things: a church and a court house. Both places where the American Family congregate, both symbols associated to these common values: The Cross and the American flag. Kroc insists that the “Golden Arches” of McDonalds could be of the same meaning, a place where “decent, wholesome people come together”.

After a tug-of-war business relationship between the three, Kroc’s hunger for more pushes him to cease all decency and figures out how he can pull the business from under the McDonald’s brothers’ feet through real estate trickery. In a poignant — and for the audience — uncomfortable phone call between the brothers and “The Founder”, Kroc hits them with the disheartening truth: “I’m national. You’re local”, succinctly addressing the at times chilling American capitalist drive.