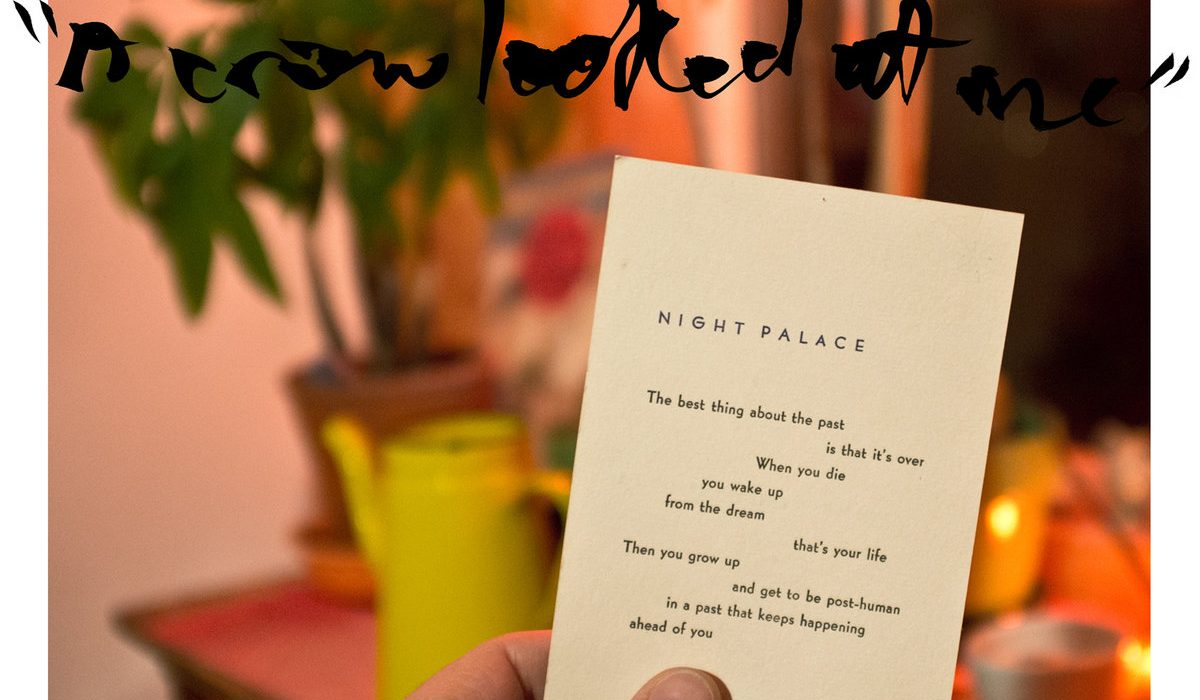 In his twenty years making music, first as The Microphones until 2002 and now as Mount Eerie, Phil Elverum has cultivated the image of a man of mystery. His music conjures up whole worlds replete with natural imagery illustrating more personal revelations, obscuring our understanding of the man himself. Instead, there is a tendency to view him as a somewhat mystical figure existing somewhere between human society and the natural environment. This is bolstered, no doubt, by the fact that he lives on an island in the Pacific Northwest that is overlooked by the real Mount Eerie.

Relatively publicity-shy, for a six-month period in early 2016 he communicated almost exclusively via haikus on Twitter (one typical example: ‘Pacific Northwest/pothead in a Subaru/with humungous shorts’). He spoke little of his personal life, and the biography on his website reads: “Possibly sociopathic, I personally don’t care that much about people and wish that everyone else was a little more focussed on the song, not the singer”.

Last June, Elverum lost his luxury of privacy in a big and real way: no longer a mystic, it turns out he’s just a man. We found out his wife Geneviève Castrée Elverum, who recorded under the names Woelv and Ô PAON, had been diagnosed with advanced pancreatic cancer shortly after the birth of their daughter, and the financial burden was so great that the couple had to resort to crowdfunding. Geneviève died just over a month afterwards. Suddenly, one haiku from seven months earlier reading, “when you hear about/what’s happening in my life/you’ll think ‘Why’d he tweet?'” became less whimsical and more crushing.

Recorded in his late wife’s workspace and predominantly using her instruments, Elverum’s new album A Crow Looked at Me is the product of this turmoil, and is like little he has previously recorded. What is initially striking is how sonically distinct it is from his recent albums: where 2012’s twin albums Clear Moon and Ocean Roar and 2015’s Sauna were droning, foggy and vague, the songs on A Crow Looked At Me are direct and stripped down to their bare bones.

No longer the expansive wash of sounds Elverum has employed before, here the music trails his voice: he is accompanied by quiet acoustic strumming and infrequent swells of pianos and electric guitars. Softly in the background, we hear drum machines that are uncomfortably evocative of hospital machinery. Melodies are scarce and, in their absence, the length of most lines is dictated by how much Elverum has to say. Now more than any other time, he has a lot to say.

While Elverum has previously spoken of pursuing a more direct writing approach — “Dense with easy words. Say everything as it is. Resist big-picture reflections” — it is hard or even cruel to imagine this is what he had in mind. A Crow Looked at Me is a grief diary set to music, wandering through time from the immediate aftermath of Geneviève’s death to the moment the two met, and back through the midst of her illness.

The album is lacking the epiphanic observations that we see in the rest of his work, where personal realisations are blown up to cosmic proportions. Instead, Elverum is preoccupied with in-the-moment ruminations; one moment he celebrates the small victory of finally throwing away Geneviève’s toothbrush, the next he is overcome as he checks the post a week after her death to discover a package she had ordered for their daughter. The album’s emotional potency lies in the small details that leave songs distinguished more by the lyrical content than the music, and each has at least one line which hits you unexpectedly hard.

It is perhaps inaccurate though to interpret this devastating directness as a stylistic choice to articulate grief, rather than a product of grief itself. In ‘Seaweed’, he searches for symbolism in his surroundings to process his loss: “I can’t remember, were you into Canada Geese?/Is it significant, these hundreds on the beach?/What about Foxgloves — is that a flower you liked?” He finds no meaning or solace, and it is only in this context that he numbly declares on the opening track “it’s not for singing about/it’s not for making into art/when real death comes to the house, all poetry is dumb”. This is a significant and devastating mission statement for an artist who has written about concepts of life and death for most of his career, but now surmises “conceptual emptiness was cool to talk about, back before I knew my way around these hospitals”.

All of this makes for an album that is exceptionally difficult to review. I spent a lot of time banging my head against a wall when writing this, wondering whether it was appropriate to review A Crow Looked at Me and how I would go about doing so. After all, Elverum could be forgiven for having the key qualities of music criticism — recording integrity, melody, instrumentation, lyrics — a long way from the front of his mind when creating this work. Rather, his intention, detailed when announcing the album, is simple: “I make these songs and put them out into the world just to multiply my voice saying that I love her. I want it known”. More than an artistic work, this album is a simple expression of love for his wife, and an epigraph for Elverum’s life with her. The album is defined by her absence, yet at the same time sees her looming over every word.

In the end, I decided to review this for two reasons. First, it deserves publicity for the most basic of reasons: human empathy. Simply put, it feels appropriate to amplify this declaration of love and grief. Secondly, more directly, A Crow Looked at Me has lingered on my mind more than any recent album I can recall: it is one of the best creative works Elverum has put out to date, even though we probably both wish it never needed to exist.

Needless to say, it’s a tough listen. The gaps between the songs are mercilessly short, leaving little time to process the difficult emotions communicated within each song until the end of the album. Moreover, its nonlinear nature is exhausting and disorienting, likely purposefully so. It sounds creaking and cold, with little of the warm sonic expanses of previous albums that allowed the listener to get lost within; now there are only Elverum’s words. Finally, and obviously, this is a hard listen because it’s just so sad: this is Music To Cry To if I’ve ever heard it. Luckily, Elverum’s lyricism is so well-crafted that, despite how painful and dense it is, you can’t help but dig deep and hold on. Moreover, there are more emotions than sadness here, and the album serves as a tribute to Geneviève and Elverum’s relationship with her as much as it resembles a memorial.

In this sense, the album’s final three songs make some headway towards a conclusion. In ‘Toothbrush/Trash’, Elverum sings “the echo of you in the house dies down”, and observes haunting memories becoming replaced by sanitised photographs. Though “it does not feel good”, it’s a necessary part of the grieving process. The album’s beating heart ‘Soria Moria’ traces the longing that has followed Elverum from his childhood through his transformation from artist to caregiver in Geneviève’s final months, contextualising the album among Elverum’s other works. On the way, he lifts the melody from 2001 song ‘The Moon’, references the creative process behind 2008’s Dawn, borrows the pitch-black, crackling feedback from 2007’s black metal-influenced Wind’s Poem and returns briefly to the elemental imagery he is associated with. For the first time on the album, Geneviève is not the overarching focus.

As ‘Crow’ ends the album on a quiet, intimate note, the transition is complete: unlike every previous song, it isn’t sung to Geneviève, and she shifts from being referred to in the second person to third person. She’s replaced by their unnamed daughter as Elverum reflects on a November morning’s walk with her and ponders about the world she will grow up in. In an album characterised by harrowing intimacy, it is comforting to see Elverum released, somewhat, from his grief. As the poem by Joanne Kyger on the album’s cover reads: “the best thing about the past is that it’s over”.

Elverum once described the song as “a beautiful deep spring that somehow cuts through all layers of complication and can hold permanent and true wisdom in a few simple words or sounds”. To a great degree this explains why A Crow Looked at Me is such a satisfying and accomplished album: by singing as directly as he can about emotions he is still very much in thrall to, Elverum has created an honest and lingering tribute to his wife that is as loving as it is catatonic. This is one of the most powerful pieces of art that Elverum has created, and will rightly linger in the minds of everyone who listens to it, but to score this album out of ten will always feel more than a little graceless.

To understand this album you need to hear it: for yourself, for Phil Elverum, and for Geneviève.