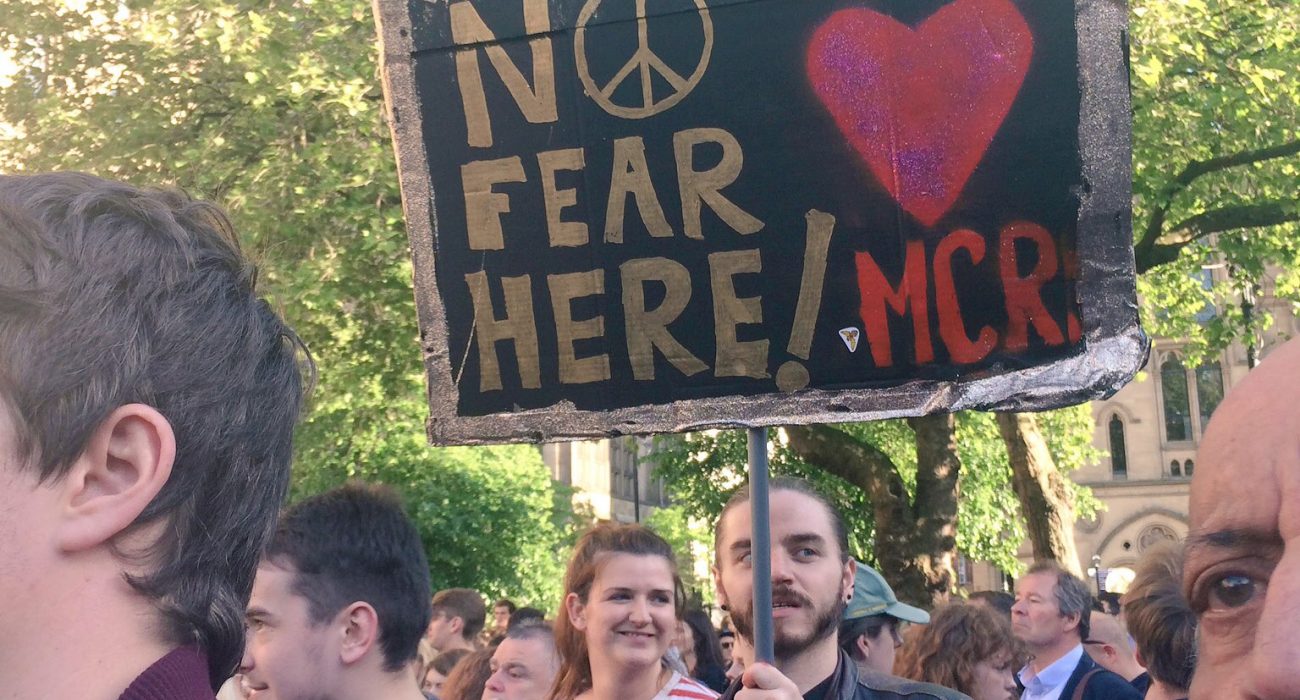 The reaction to this week’s attack at Manchester Arena has been warm and strong, but ultimately predictable. Yet again, on both sides of politics, emphasis has been placed on the comforting generalisations: religion, ideology, love, and unity.

In the hours and days following such an attack, public calm, resilience, and respect for the victims should be priorities. On these terms, taxi drivers, hotel managers, politicians, and the public could have done little more.

The following evening, we stood in Albert Square, heads held high, emboldened by the words of Tony Walsh and others. We celebrated Manchester and, for half an hour, came together in loving unity. We were imaging a city rocking and rolling to northern soul: an “atomic” city of invention, industrialism, and “Northern grit, Northern wit”. There were hugs, knowing moments of eye contact, and the hair-raising chant, “Man-ches-ter, Man-ches-ter”.

Some reacted differently. Geraldo Rivera, US Fox News presenter, labelled Manchester a “hotbed of Islamic radicals” in a series of tweets hours after the attack. He claimed that “kids formerly into gangs and guns are now being recruited, converted & radicalized by Islamofascist preachers of hate.”

Though inappropriately timed, he was basing this comment on February’s Guardian investigation. They found that a total of nine convicted or dead jihadists were found by The Guardian to originate from a one mile radius of Moss Side, South Manchester, as of February this year.

This group of young men were found to be part of a radical network, sometimes attending the same mosque. A further five terrorists were found to originate from a 2.5 mile radius of the area.

The Fallowfield home of Salman Ramadan Abedi raided on Tuesday is within that one mile radius. It has been reported that he shared connections with this terror network, as well as local gangs.

LovinManchester wrote that the people of Manchester had “the perfect response”, citing tweeted replies such as “that doesn’t sound like the place I’m from, you reaction seeking numpty.” These sorts of claims to the city’s spirit have been made, understandably, to comfort in the aftermath of such a traumatic attack.

But scratch beneath the surface, particularly into the history of south Manchester, and we can see that Mr Rivera isn’t right, but he certainly isn’t wrong. This tragedy is likely a climatic reach of over forty years of pain in certain corners of our city.

A history of violence in south Manchester

Amidst the slump of the 1970s and large-scale housing demolition in the area, an underground gang-run firearms and narcotics economy emerged in wider south Manchester, including the Longsight and Hulme neighbourhoods.

In the 1990s, the city’s nickname, ‘Gun-chester’, was coined, as the Moss Side Gooch Close Gang and the Cheetham Hill Gang fought for control in the city centre.

Then, two major Moss Side gangs, Gooch Close and Doddington, engaged in violence over control of local drug-selling areas.

A truce of the mid-1990s did little to stop the violence. With unemployment at three times the national average (30 per cent) Moss Side rumbled on through the pain and fear of regular tit-for-tat shootings.

In the 2000s, rates of gun crime were falling and significant grassroots efforts were being made to keep young men away from the gangs.

Today, despite those efforts, violence remains a feature of life in the area. From December 2015 to April 2016 there were two murders in south Manchester, associated with conflict between the Moss Side Bloods (an offshoot of the infamous Doddington gang) and the Rusholme Crips.

In February this year, a man linked to the Moss Side Bloods was shot and seriously injured. Investigators at the time suspected that the man was involved in a gang conflict between those of Libyan and Somali decent. Greater Manchester Police believe that this signals a rise of tensions in Moss Side, and locals believe that young Libyans are particularly at risk.

In the aforementioned Guardian article, North of England Correspondent Nazia Parveen quotes local boxer-now-trainer, Maurice Core: “Moss Side has always been linked to a gang culture but now that is dying. I can’t say for sure whether [Islamic fundamentalism] is a new home for youth who want to be part of a gang but something is drawing them towards it.”

Regardless of the overlaps between gangs and radicalisation, tensions have been growing for some time.

The government, and particularly then-Home Secretary Theresa May, is coming under scrutiny for cuts made to community and armed policing. In 2015, Damian O’Reilly, ex-Manchester Community Police Officer, speaking at the Police Federation Conference, warned Mrs May, “intelligence has dried up, there aren’t local officers, they don’t know what’s happening, there’s no proactive policing locally…[with these cuts we will be] risking national security”

A different reaction to terror

There were the usual platitudes: he was a “psychopathic murderer” (George Monbiot, writing in The Guardian); “Unity & Resolve make us strong” (Brendan Cox, tweeting); “This wicked ideology must be obliterated” (Donald Trump).

Quite right, too. But in the coming weeks, months, and years, we must go beyond this. We must understand these people come from places like Moss Side and Molenbeek (the neighbourhood in Brussels that the Paris attackers called home).

In this week’s instance, he travelled to Syria and Libya, but his radicalisation, though still unclear, had roots in Manchester.

Our conclusions must go beyond simplistic notions of madness, religion, and love. Instead, we must turn to issues of poverty, crime, policing, alienation, integration, and more.

Take this comment from Moss Side Councillor, Sameem Ali, in February: “We are aware of some young people becoming radicalised. High areas of deprivation are targeted by groomers, and we have been working with the counter-terrorism unit on a number of projects to overcome this.

“We don’t know why they join Isis but we are trying our best to protect our young.” Specific, clear, and humble. That is how we make progress.