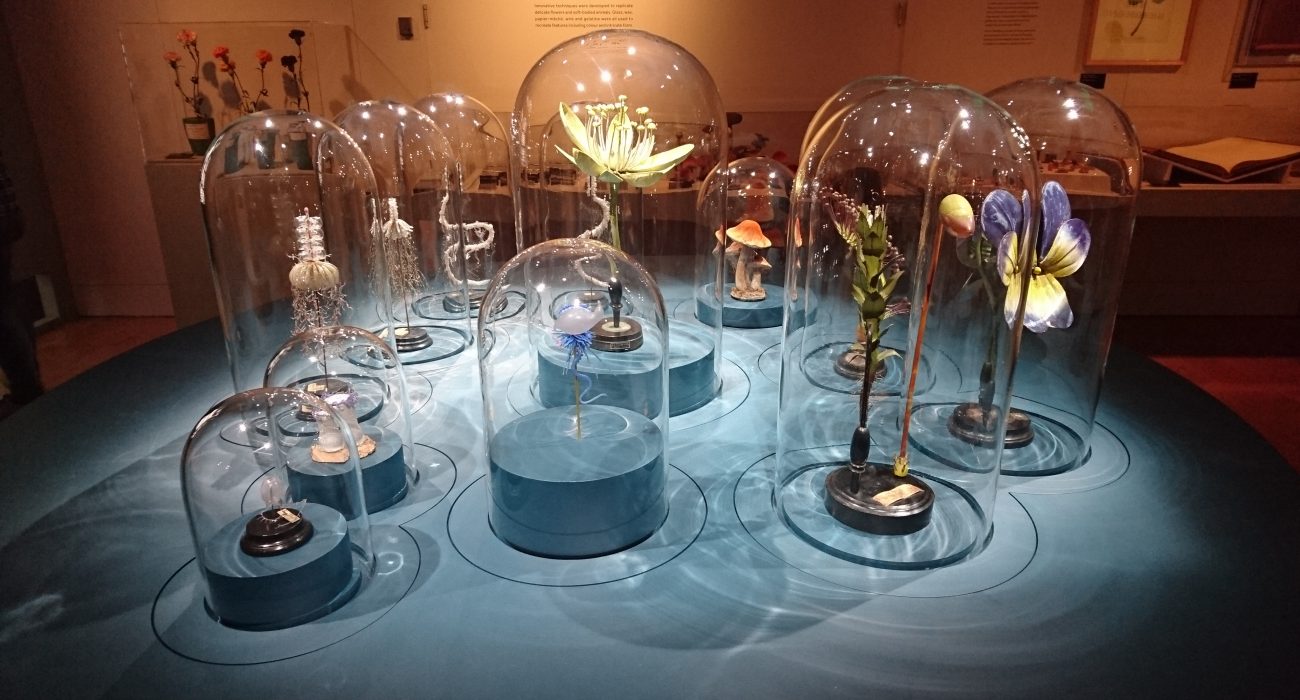 Enter the Object Lessons’ Exhibition room and you will be greeted by one of the collection’s strangest curiosities, a preserved Armadillo. So well preserved is this Armadillo, you may even think it was still alive. Suspended in time, the Armadillo seems to represent the idea that lies at the very heart of the collection, to provide a window to the past through the intricate beauty of objects.

The windowless room in which the collection rests, subtly bathed in moody yellow light, puts the visitor in mind of a mysterious, old, room in a stately home, brought to life by table after table adorned with a charming relics of the past.

At its centre, is one of the loveliest. Papier-Mâché flowers and glass jellyfish sit in their very own bell jar, allowing visitors to admire the life-like craftsmanship of the German Glassworker Leopold Blaschka, alongside scientists worked with his son Rudolf to create true-to -life models of sea animals.

Made in a time when soft bodied animals like these could not easily be preserved, the glass models allowed the animals to be documented free from the limitations that came from analysing them in their organic form. The glassware helped bring exotic creatures, such as the Portuguese Man O’ War to Victorian England, and allowed scientists and biologists to record their existence.

Much of the rest of the exhibition once served as an educational tool and in one corner it even features a collection of old projector slides, formerly used in university lectures, like little stars in a mirrored cubical.

Each one is illuminated, allowing the viewer to appreciate miniature illustrations of everything from plants and flowers to dinosaurs, fish, and human anatomy.

Another corner hosts the Framing Time collection which displays a set of 19th century models representing prehistoric animals along with drawings and fossils, which show Victorian interest in prehistory and what contemporary scientists thought these creatures might have looked like.

Critical to the collection is the Museum’s goal of blurring the boundaries between art and science. Most of the pieces on display belong to the private collection of George Loudon, a prolific art collector who has, for much of this life collected anything from carpentry tools to high art.

The collaboration between Loudon and The Manchester Museum has not only facilitated the public display of historical objects that would otherwise be confined to the private market but also allowed the Museum to display valuable items that are usually kept in storage.

The partnership, which also includes the World Museum in Liverpool also lets the spirit of contemporary art to permeate the arrangement of the pieces. With minimal information provided alongside the objects, the viewer is encouraged not to become preoccupied with factual detail but rather to appreciate the aesthetic beauty of the objects presented.

The benefit of enjoying the collection in this way means that the pieces can be fully appreciated for themselves, giving them renewed value.

Removed from heavy factual contextualisation, the collection allows the viewer to appreciate the little details that help to build the wider scientific world, piecing together ornaments of the past. The beauty and charm of these objects facilitates interest in them and helps to bring the viewer closer to a world often overlooked.