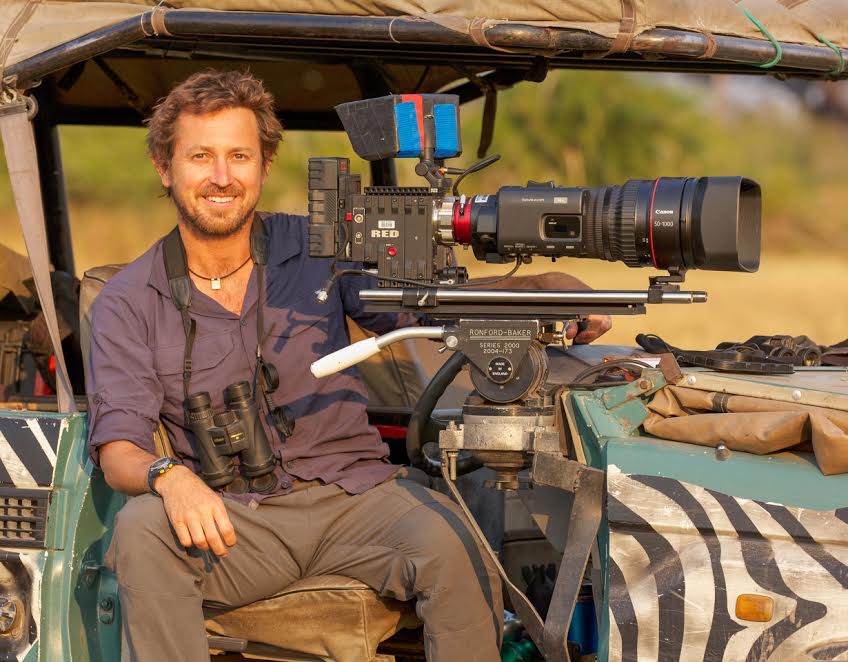 Manchester’s dull and wet weather makes the city an unusual place to find BBC nature producer and self-confessed “hot weather person,” Chadden Hunter. “I had wildlife coming through my window,” the BBC producer says of his childhood growing up in North Queensland, Australia. “You live outdoors 365 days of the year – windows never shut – and I do find it different coming to different parts of the Northern Hemisphere.”

It seems lucky then, that Chadden, who has been involved in projects such as the beloved Frozen Planet and Planet Earth II series with David Attenborough, saw a rare sunny day in Manchester for his ‘Behind the lens: Do documentaries help save wildlife?’ talk at the university this April.

As we sat down with him, Chadden speaks passionately about how his childhood influenced his engagement with nature: “I’m sure for me, part of [my interest in nature] was that complete emersion in tropical biology and life that made me fascinated with it…there were green tree pythons or frogs or you name it”.

Considering his background in biology, filmmaking would seem like a nature step for a nature enthusiast. “Well it was never planned,” Chadden explains. “I always wanted to just share my love of biology with other people, so I always thought I was going to be a Biology professor.”

“Then while I was doing my PhD on gelada baboons in Ethiopia, based out of the University of Liverpool, a film crew came and did a little piece about my monkeys”. This was Chadden’s first experience with filmmaking, albeit it in front of the camera.

For the project, I did “an interview for Ethiopian television where I was trying to talk to people about how important gelada baboons were,” he explains. At the time, gelada baboons had seen their population numbers decrease substantially after farmers started shooting them for eating their crops.

“That was the thing that made me realise television, especially, was a really powerful tool” for both education and entertainment.”

It seems that working as a wildlife filmmaker is as fun as it seems, with Chadden telling us that “one of the amazing things about [it] is that you’re really spoilt for adventure.

His drive for variety and exploration explains his desire to work on Frozen Planet, back when he was A JOB. “I really, really wanted to get on that series because I had no Antarctic or Artic experience so it was a one-off chance.”

Chadden discloses that the Frozen Planet has been his most challenging project to date, in terms of the physical difficulty of filming. “We did under ice diving in Antarctica,” which was demanding “because everything about [that environment] is not made for humans.”

“You are drilling through two metres of sea ice with a big drill to make a man-sized hole and any bit of exposed skin starts dying in that temperature,” he tells us. “Bits of your lip start falling off because everything else is covered apart from your lips around the regulator.”

And as they “weren’t tethered in Antarctica…it’s very easy to get a long way away because the water is so crystal clear.” Chadden explains the risky choice is all in the hope of getting the perfect shot. “Russians and Norwegians would tether underneath ice but when we were filming, because we don’t want the ropes getting in the way of our shots, we asked if we could go untethered.

“[It’s] fine if you’re looking out for each other, but if you swim away from that hole for ages you don’t realise that actually you’re 200 m away because the water is so crystal clear” and you’re underneath this huge “white ceiling.”

Whilst a rewarding experience, Chadden recounts that the cold weather conditions during filming “killed me.” Because of this, he made the (perhaps wise) decision to head straight to the Arabian Peninsula for the production of his next series Wild Arabia.

“I remember the very first day on Wild Arabia we were in the desert, I was wearing shorts and flip-flops and I was getting the camera out of the big pick-up truck and we were in work-mode, thinking about the shots. I looked down to my flip-flops and I almost wanted to cry, I was so happy,” he says laughing.

But the weather isn’t the only challenging aspect of filming: “Technically [speaking], the thick grasslands (seen in Planet Earth II) were tough because you can’t see anything,” says Chadden. “We were using drones to get shots from above, trying to setup camera traps inside the grass that animals would walk past, but it’s very hard to know where the animals.”

“We had to set up a trigger, usually an infrared beam up a pathway, which the animals would trigger as they went past to tell the main camera to turn on before the animals got there” but this wasn’t always as easy as it sounds.

“Grass blades would fall around and trigger the infrared beam, so you get lots of false triggers where the camera switches on and there is nothing all day,” Chadden explains. “Then a lot of the animals, when they came across these cameras hidden in the grass, they just hated them and they would start to pull them apart.

“Sometimes trying to outwit animals and get cameras close to them without disturbing them is probably one of the biggest challenges.”

The idea of just watching nature, instead of interacting with it, is a recurring theme in modern documentary filming. As Chadden says, actions taken by animals are purely “natural selection.”

“On frozen planet, there was this one situation where these king penguin chicks, which were pretty big but still fluffy, had fallen into a hole in the ice. They were all trapped in there and freezing and were never going to get out.”

But “this cameraman was insisting on getting them all out and we decided not to do anything because that’s happened naturally, it probably happened every year – there are thousands of penguin chicks that haven’t fallen in that hole – but for him it was a personal thing that he couldn’t stand by and watch it.”

However, last year’s Planet Earth II series saw a U-turn in this way of thinking. Many might remember, during the finale ‘Cities’, the hundreds of turtle hatchlings in Barbados that were killed by cars or by falling down drains after becoming disoriented by city lights.

“The turtle hatchlings were really interesting because the public response was ‘how dare you’,” says Chadden. The BBC later released a statement stating that all the hatchlings filmed had been returned to safety, and that they were now working closely with local conservationists on methods of prevention.

“If it’s a man-made ordeal that the animals are going through then we might make a different decision but usually we are working with someone who is a local expert or scientist that would take that responsibility on.

“If you see a very emotional scene of an animal dying on screen we always get some kind of comments from viewers” but “you do not interfere with nature taking its course, no matter how horrific it is” – a hard, but necessary, action to take.

So, what should wildlife fans look forward to next? The BBC produce one blockbuster nature series each autumn, and this year is no exception. “Coming up later this year we have Blue Planet II with David Attenborough on-screen again” (a rare but welcome surprise), says Chadden.

“Then the next year we have a series called ‘Dynasties’ where each episode follows a different animal family. We spent two years following one lion pride in Kenya etc. but it’s a really different style and hopefully the storytelling in it will be more genuine because you really will be watching the rise and fall [of these animal families].”