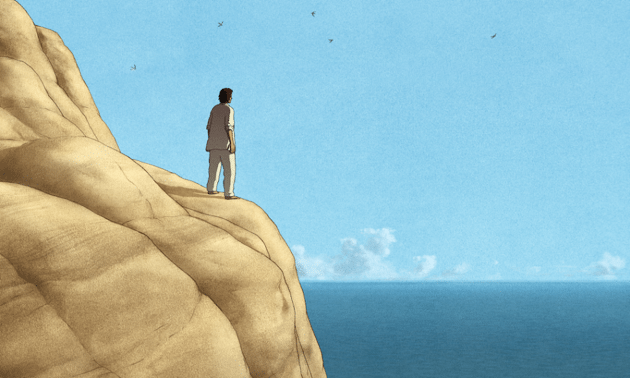 Studio Ghibli time and time again have produced some of the most beautiful and captivating not just animated features, but films in general since its birth in 1985. Spirited Away (2001), Princess Mononoke (1997) are but two shining examples of the studio’s outstanding track record, however, following the retirement of Ghibli stalwart Hayao Miyazaki, it was thought the end was nigh for the company.  The Japanese auteur had been so integral to the studio’s success and reputation that it seemed the departure of Miyazaki marked the end of an era.

Yet, despite the apparent swansong of When Marnie Was There in 2014, the studio has resurfaced in a co-production with European company Wild Bunch.  Resembling the art work of Hergé’s Adventures of Tintin more than anything, The Red Turtle shares little physical similarity with previous features by Ghibli.  Yet those familiar with works such as Mononoke and My Neighbour Totoro (1988) will quickly recognise the charm and beauty the Japanese studio is renowned for injecting into its films.

Directed and written by Dutch director and animator Michaël Dudok de Wit (Father and Daughter – Academy Award winner of Best Animated Short Film in 2000), The Red Turtle is a Crusoe-esque tale of a man who, following a savage storm at sea, finds himself stranded on an eerie yet beautiful island, teeming with smaller life forms such as crabs, various creepy crawlies, and sea-lions.

However, as he attempts to leave the island in a make-shift raft, his escape is thwarted by the island’s largest resident – the eponymous red turtle. After several attempted getaways where his vessel is destroyed by the marine giant, the man eventually finds the creature on land, basking in the sun on the shore.  In a fit of rage, the protagonist flips the turtle on its back, rendering it helpless, marooned on the beach.  What follows is a tale of guilt, transformation, love and solace.

At first glance, the film may sound to some like an animated re-hashing of Daniel Defoe’s classic novel, or Robert Zemeckis’ Cast Away (2000), but this could not be more of an erroneous judgement.  The Red Turtle is quite simply an absolute masterpiece.

Scored impeccably by French composer Laurent Perez del Mar, it is a story which in a mere 80 minutes manages to act as a meditation on life, death, the history of man, and familial love.  Adhering to the fantastic genre, just as the majority of Studio Ghibli’s features do, the ambiguity between the real, surreal and the magical truly absorbs the viewer into the dream-like serenity of life on the island.

A key factor of the film’s potency is the complete lack of dialogue.  The silence created by the speechless nature of the film accentuates both the alien and familiar sounds of the island biome, as well as the aforementioned exquisite soundtrack by Perez del Mar.  For many, the absence of dialogue may cause hesitation and concern, but this choice by Dudok de Wit has proved integral to the emotional power which the film holds.

On a limited release, it may be hard to track down a chain cinema which is showing The Red Turtle, but I cannot recommend highly enough seeking your nearest independent cinema (HOME in Manchester, for example) and going to see for yourself how outstanding this latest project from Studio Ghibli really is.

Visually stunning, melancholic and breath-taking, The Red Turtle is an encouraging reminder that, despite the dominance of 3D and CGI in the modern world of animated film, simple hand-drawn picture still has a place at the heart of cinema.