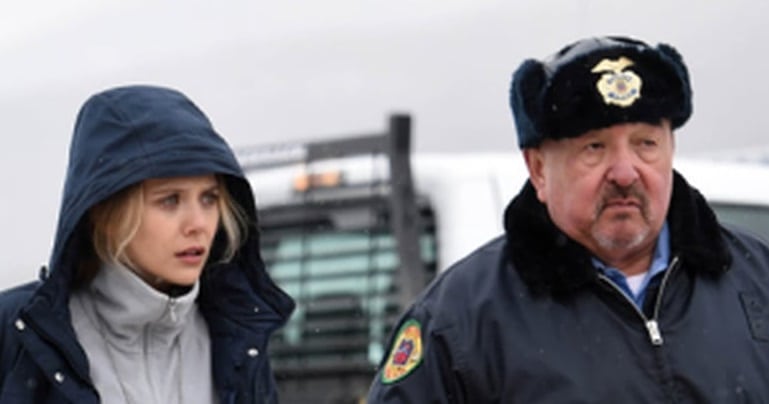 Crime in sub-zero territory has been well-represented on-screen throughout the years.  Notable examples include classics such as the Coens’ Fargo (1996), and more recent hits, such as Jennifer Lawrence’s breakthrough film Winter’s Bone (2010) and Sky Atlantic’s Fortitude.  There is something about the bleak and monotonic landscape of tundra, or frozen expanses, that injects into audiences a chill which is difficult to recreate in other settings.

Wind River is no exception.  Right from the film’s opening scene, in which we see a terrified girl run barefoot through vast stretches of snow, the unforgiving nature of the environment is evident.  Do not let the inclusion of Avengers duo Renner and Olsen fool you — this film could not be any further from the glossy superhero romps Marvel continue to churn out.

After 18 year old Natalie Hanson’s body is found frozen in the Wind River Indian Reservation, FBI agent Jane Banner (Olsen) arrives to assess whether the death was a homicide.  With help from Renner’s Cory Lambert — a predator hunter for the reservation — she follows an ominous trail of leads to track down the culprit, only to uncover a truth much darker and sinister than first suspected.

All in all, it is a highly impressive directorial debut from Taylor Sheridan (ignoring his 2011 gore-porn flick Vile).  He is known for his superb screenplays in Sicario (2015) and Hell or High Water (2016), and the dialogue and tone of these two films is very much present in Wind River. However, he has avoided merely mimicking the techniques he undoubtedly observed from directors Denis Villeneuve and David McKenzie while working on these films; with immensely powerful and atmospheric cinematography from the relatively inexperienced Ben Richardson, Sheridan has made the film his own, and could be looking at a very prosperous directorial career ahead of him.

The major shortcoming of the film, however, is its initial pace.  The audience warms to Renner’s Lambert immediately, through expositional scenes of the hunter with his son and ex-wife.  Yet it is the scenes in which Sheridan introduces us to the mourning parents of victim Natalie, and in which Lambert berates the junkie Hanson brother Chip, that dilute the tension and suspense, causing the opening act drag somewhat.

Nevertheless, this is a minor pitfall which is quickly forgotten as the tried-and-tested chemistry between Renner and Olsen blossoms further, and the plot thickens.  There is an ingenious flashback scene which completely changes the complexion of the act it interrupts (starring a Jon Bernthal very different to the characters he is renowned for playing in The Walking Dead and this year’s Baby Driver), and at the film’s climax there is an exhilarating stand-off scene which more than makes up for the film’s slow start.

Sheridan’s next film project is Villeneuve’s Sicario sequel, Soldado, for which he has written the screenplay.  Wind River is an excellent first run-out as director for the writer, and already enjoying vast critical and commercial success, could prove to be Sheridan’s gateway to a successful directorial career.