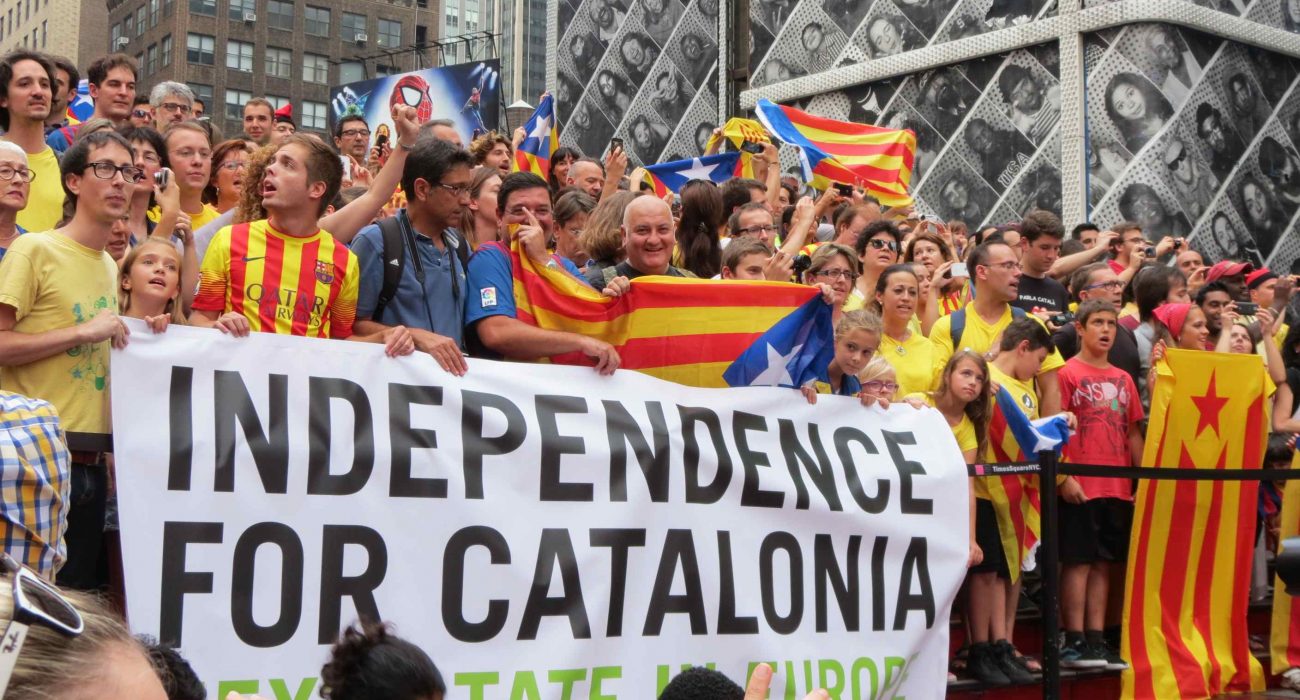 The defiance of secession – Catalan independence

We are coming up to 80 years since the publication of George Orwell’s ‘Homage to Catalonia’, in which he described Barcelona as “a town where the working class was in the saddle … There was much in it that I did not understand, in some ways I did not even like it, but I recognized it immediately as a state of affairs worth fighting for.”

The Spanish civil war ended up as the prequel to World War Two, and the fascistic trio in Europe of Nazi Germany, Mussolini’s Italy, and Spain under Franco, were assembled.

In the midst of severe national division, Orwell writes of Catalonia as a functioning state that was run by every leftist radical party from the socialists to the anarchist: “Practically every building of any size had been seized by the workers and was draped with red flags or with the red and black flag of the Anarchists; every wall was scrawled with the hammer and sickle and with the initials of the revolutionary parties… Every shop and café had an inscription saying that it had been collectivised…  Waiters and shop-walkers looked you in the face and treated you as an equal.”

But by January of 1939, Barcelona fell to the fascists. Half a million refugees crossed the border into France, Catalan political autonomy was abolished, and Catalan Christian names were forbidden. Even the Catalan language itself and the Sardana — a Catalonian cultural dance — were outlawed.

Mediums of communication, such as books and newspapers, were requisitioned or burned. The white terror of Franco was a limpieza — cleansing — of anything and anyone that they perceived as leftist, anti-Catholic, anti-monarchy, anarchist, intellectual, liberals, Protestants, separatists, and more. The White Terror death toll was far greater than the Red Terror before it with an estimated 400,000 murdered at the hands of the Franco regime from 1939-1975, from Andalucia up to Aragon, and everywhere in between.

Fast-forward to present day and the right-wing Partido Popular (PP) government, which owes its roots to the Francoist minister Manuel Fraga, still denies Spanish historians access to government archives which would allow them to investigate the White Terror more thoroughly, and to ascertain the ultimate fate of the victims.

There are families across Spain and beyond who at least have a relative who was a victim. Yet, due to systemic corruption from the main parties — both PP and the centre-left Partido Socialista Obrero Español (PSOE) — right-wing nationalism maintains a strong position in Spanish mainstream politics. It may be a reaction to the long-held influence of secession movements, especially the Catalonian variety, though some will suggest that the reaction is opposite.

In the early hours of Wednesday 20th September, just 10 days before the electorate of Catalonia vote on the independence question in another referendum deemed illegal by the Spanish government, the Guardia Civil — the infamously heavy-handed national police which acts at the direction of Madrid’s interior ministry, the equivalent of the Home Office in the UK — stormed into Catalonian regional government departments arresting politicians and their aides.

This was a response to the first round of hearings for over 700 mayors in the region who are under investigation for supporting the referendum. The President of the National Assembly in the region, Jordi Sanchez, retorted with “the time has come. We resist peacefully. We come out to defend our institutions with non-violence.”

This defiance has been a consistent feature of the Catalonian secession movement, and a necessary one, given the indefatigable attempts by the Spanish national government to silence them. This auspicious month in southern Europe’s political history also marked the 50th anniversary of the Gibraltar sovereignty referendum, where the people of Gibraltar voted to reject Franco’s fascism.

The result was seen as a provocation towards Madrid by the Franco regime. The outcome was a closed frontier by order of Franco from 1969 to 1985, making the people who voted to remain British just as defiant as the Rock of Gibraltar itself. This defiance is a source of pride and strength in Gibraltar, and the same applies to pro-independence Catalans, young and old. The right-wing elements of Spanish politics have led to solidarity between those negatively affected by it through the time.

Notwithstanding the debates of self-determination, sovereignty and nation-state legitimacy, this defiance is a factor that cannot be ignored when one anticipates a majority vote for independence which is rejected by the Spanish government as illegitimate.

Four years removed from the previous ‘illegal’ referendum for Catalonian independence, it does not look like the regional governing parties — and the Catalan people — will ever give into the political and, at times, physical, pressure exerted upon them from Madrid.

Barcelona may be a much different place to Orwell’s Eden of leftist radicalism in many ways, but there are aspects of the revolutionary spirit that appear to have lingered in the psyche of the region at large.