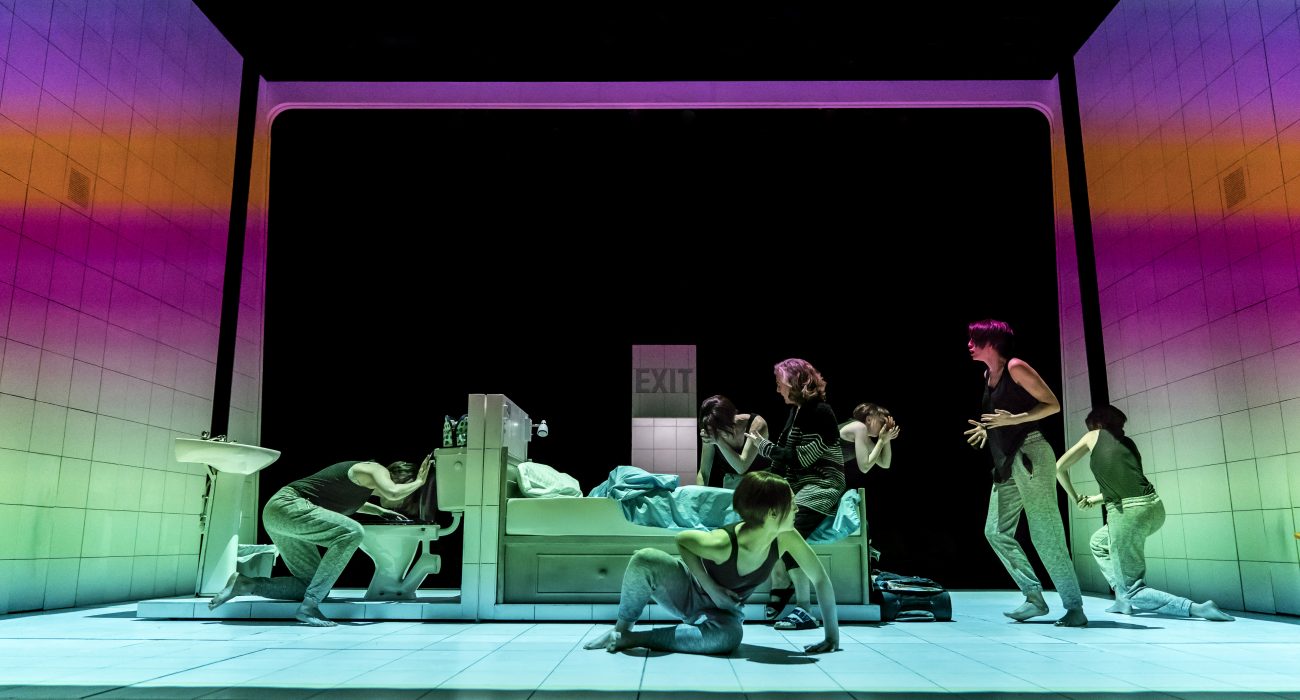 People, Places and Things is a play about identity, escaping reality, and how the abuse of drugs and alcohol can cause a person to become lost within their own life.

It tells the story of a drug addict, Emma, who goes to rehab in order to ‘heal’ herself, and the audience follow her journey through it as she gradually improves. Her inability to reveal the truth about herself comes due to the fact that she is also an actress, and by pretending to be different characters through her life she struggles to find her true identity.

The production at HOME, directed by Jeremy Herrin and Holly Race Roughan, succeeded in conveying the sense of confusion between what is real and what is not. As a result drawing the audience sympathies towards the protagonist, Emma (Lisa Dwyer Hogg). Hogg was particularly convincing in playing a character who is constantly isolated, and lost in her own world. She outshone the rest of the actors in the play, as her character seemed the most developed and contrasted with the lack of personality of everyone around her.

However, this worked as a way of highlighting the society through Emma’s eyes: the therapists as unsympathetic, the other members of the therapy group all having their own issues, and her own parents as unable to understand or believe her when she finally confronted them.

The play really managed to capture the chaos inside Emma’s head. While none of the characters could see through her eyes, the audience were given that power. The loud, thumping music, the strobe lights and the different ‘Emmas’ that appeared at two points in the production, crawling out from inside her bed and from the side doors, powerfully represented Emma’s unstable mind. This was combined with the fact that another audience was sitting on the other side of the stage, facing us. The effect was the feeling that Emma was constantly being watched – she appeared a lot more vulnerable and was under constant gaze from the audience on each side.

Yet, those moments of chaos were juxtaposed with the realistic set, and the naturalistic style throughout most of the play. I think it created the sense that the audience were there too – the clinical feeling of the hospital room was conveyed effectively, and the therapy group seemed an inclusive, familiar, but not a very comfortable space.

Overall, I very much enjoyed the play, and was fully engaged throughout. It was easy to follow Emma’s journey and although I felt distanced from her at first, she became an accessible character as it became clearer what she thought and felt.

In the end, it really made the audience think about what it means to be alive.

The play runs until the 7th of October, you can buy tickets here.