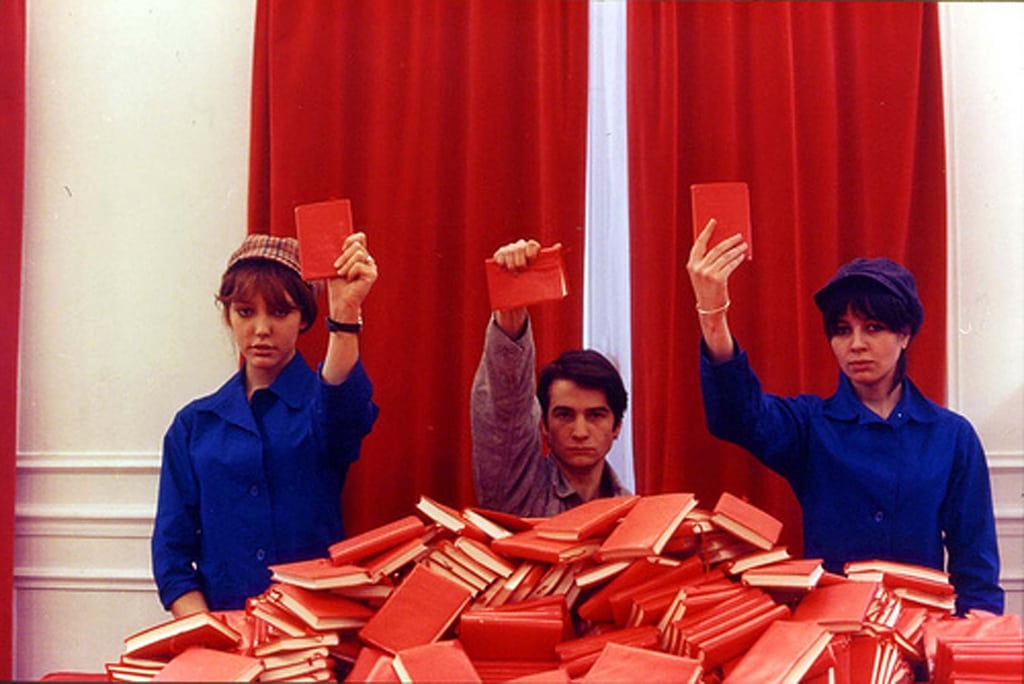 We’re living in militant times. With the rise of the Far Right, young people are meeting that challenge by taking up the radical politics of Feminism, Anti-Racism, LGBTQ Rights, and Class Struggle. At the same time, we want a sense of hip, because for a long time we thought that art, like politics, could be done without noticing.

At Dior, Maria Grazia Chiuri is making clothes for the political and artistic front line. Chiuri believes that “everyone needs to find her own uniform, in which to express and protect herself.”

Her previous AW17 collection introduced military and utility pieces, like a crepe trench dress or faded denim boiler suit – topped by the black leather beret that is becoming the symbol of her project.

The SS18 collection fulfils the militant promise, with pieces in light, wide workers’ denim (including the Summer beret), and a women’s Mao suit. These recall Paris’ Left-Wing youth in the 60s and remind me of Anne Wiazemsky in La Chinoise.

But the collection also adds an artistic cool, which exceeds general chic through its possession of Dior’s history, and women’s artistry. Breton stripes and black reference Yves Saint Laurent’s 1960 Beat Collection, an ambitious attempt to introduce women to the underground.

Polka dots and blouses reference Marc Bohan’s 60’s designs that kept Dior fashionable. Chiuri uses Niki de Saint Phalle (representing a tradition of overlooked women artists) as volatile raw material. Her aesthetics are stamped in slogans on tulle, or her blue and gold repurposed into the piping and banding of a leather jumpsuit.

Indeed, the new slogan “Why Have There Been No Great Women Artists?” (Linda Nochlin’s 1971 essay – a copy placed on each catwalk seat) reminds us that fashion’s institutions undermine creative women and that by harnessing the radical power of women’s art, we can dismantle them from the inside.

Chiuri does not want women swaddled in Christian Dior’s feminine dream; but out of his house, a women’s dress, fashioned from women’s action.

It is established that high fashion should intuit the style of the street, but we are willing to defer to the Dior archive if it can assemble the uniforms of our own new radicalism.

Young people are aching for something militantly hip. Which is why Raf Simons and his cold platter of prints at Dior never did much. Hopefully, Chiuri’s AW17 collection will prove to have done for Dior what Alessandro Michele’s AW15 collection did for Gucci: freed an old house, and gave it over to young people and their new sensibilities.