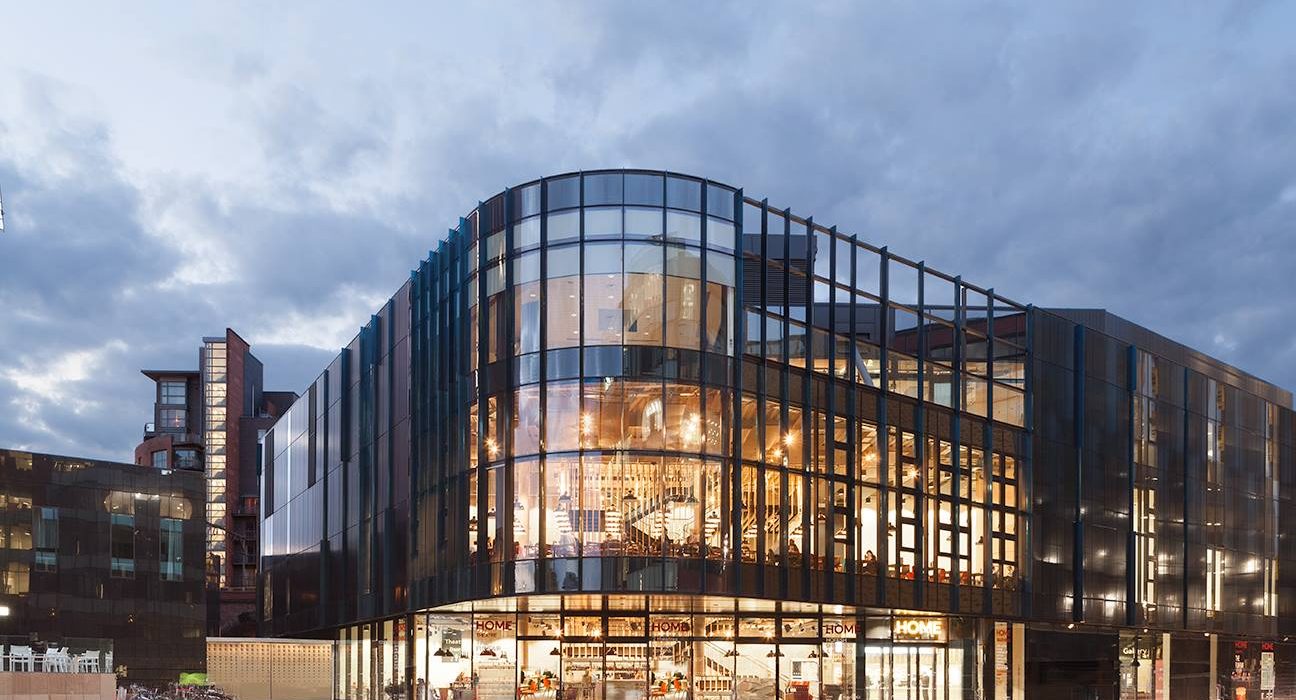 Based on graphic novel The Death Of Stalin by Fabien Nury and Thierry Robin, writer and director Armando Iannucci’s (Veep, The Thick of It) acerbic satire is set in the days following the Russian leader’s stroke in 1953 as his core team of ministers tussle for control. An all-star cast includes Steve Buscemi, Simon Russell Beale, Paddy Considine, Rupert Friend, Jason Isaacs, and Olga Kurylenko.

I Am Not a Witch

Directed by Rungano Nyoni – Rated 12A

After a minor incident in her village, nine-year-old Shula is exiled to a travelling witch camp where she is told that if she tries to escape she will be transformed into a white goat. As she navigates through her new life, she must decide whether to accept her fate or risk the consequences of seeking freedom.

Dina, an outspoken and eccentric 49-year-old in suburban Philadelphia, invites her fiancé Scott, a Walmart door-greeter, to move in with her. Having grown up neurologically diverse in a world blind to the value of their experience, the two are head-over-heels for one another, but shacking up poses a new challenge.

Filmmakers Dan Sickles and Antonio Santini construct seamless vérité scenes that lovingly frame Dina and Scott’s vulnerable, yet matter-of-fact romance. Whether at the local nail salon, the warm beaches of Ocean City, Dina’s racy bachelorette party, or on honeymoon in the Poconos, Dina captures the cadences and candid conversations of a relationship that re-examines the notion of love on-screen.

Matt Johnson, of the English band The The, has remained silent as a singer/songwriter for years. Now he attempts to challenge contemporary politics through his own 12-hour live radio broadcast. But sudden grief and a request to write a new song reveal old demons of inertia and bereavement.

The Ballad of Shirley Collins

Widely regarded as the 20th century’s most important singer of English traditional song, Shirley Collins stood at the epicentre of the folk-music scene during the 1960s and ‘70s. However, in 1980 she lost her voice in mysterious circumstances and was forced to retire from musical life. Rob Curry and Tim Plester’s documentary sets out to explore the story behind the icon, and chronicles Shirley’s battle, at the grand old age of 80, to rediscover that voice she lost so many years previously.

The film offsets this contemporary journey with a more literal one taken from the other end of her life and makes fertile use of authentic 1959 audio-archive to recount the tale of Shirley’s seminal road-trip around America’s Deep South alongside her then-lover, pre-eminent ethnomusicologist Alan Lomax.

Featuring cameos from the comedian Stewart Lee, and David Tibet of Current 93, the film eschews a straightforward biopic approach and mindfully sidesteps any rockumentary talking-heads; the filmmakers instead offering up a meditative and richly textured piece of portraiture. One which uses Shirley’s story as a prism through which to explore and reflect upon themes of heritage, posterity and the true ancestral melodies of the people.

Here then is a film about loss and redemption. A film about sacrifice, healing and rebirth. A film which suggests that, during these turbulent and increasingly untethered times, we might just need Shirley Collins now more than ever.

This event is part of the Manchester Folk Festival – a celebration of English folk in all its forms, from indie to traditional, familiar names alongside exciting new voices. From the 19th  to the 22nd of October, in and around HOME, the whole festival takes place in one area of Manchester over one weekend.

The Festival presents an incredible music line-up, as well as craft workshops, film, a proper pub singalong, artists in conversation, and a relaxed Festival Hub where you can watch the world go by. Friendly, inclusive and full of opportunities for discovery, it will have the spirit of a festival in a field, in the heart of the city.

Sally Potter’s (Orlando) latest feature is a comedy wrapped around a tragedy which unfolds in real time in an upmarket London house.

Janet is hosting an intimate gathering of friends to celebrate her promotion to Shadow Minister of Health in the party of opposition. Her husband, Bill, seems preoccupied. As their friends arrive, the soirée gradually unravels. As people’s illusions about themselves and each other go up in smoke, along with the canapés, The Party becomes a night that began with champagne but ends with blood on the floor.

Co-directors Kobiela and Welchman explore Vincent van Gogh’s most inspirational paintings to tell the story of his remarkable work, career and his untimely and controversial demise. A synthesis of painting and cinema, this is a lovingly crafted, intelligent and informative work.

Loving Vincent will also be screening as part of Manchester Animation Festival on 15 Nov 20:15.

Thirty years after the events in Ridley Scott’s seminal sci-fi, a new Blade Runner, LAPD Officer K — played by Ryan Gosling —, unearths a long-buried secret that has the potential to plunge what’s left of society into chaos. K’s discovery leads him on a quest to find Deckard — Harrison Ford returning to his old role — who has been missing for 30 years. Acclaimed director Denis Villeneuve (Sicario) delivers perhaps the most eagerly anticipated film of the year.

Popivoda’s work at the intersection of performance and film often explores the structure of the cultural and political spheres in both the former Yugoslavia and the broader contemporary world. Yugoslavia, How Ideology Moved Our Collective Body deals with the question of how ideology reveals itself in public space through mass performances.

The author collected and analyzed ﬁlm and video footage from the Yugoslavia years (1945–2000), focusing on state performances (youth work actions, May Day parades, celebrations of the Youth Day, etc.) and counter-demonstrations (student and civic demonstrations in 1968 and the 1990s, the 5 October Overthrow of 2000, etc.). Going back through the images, the film traces how Communist ideology was gradually exhausted through the changing relations between the people, ideology, and the state.

The film will be preceded by a 30-minute talk by Jamie Rann, suitable for those with no prior knowledge of the subject.

‘Future Perfect, Past Perfect: Memory and the Russian Avant-Garde’

The Russian avant-garde of the early twentieth century is known as an unprecedented explosion of originality and idealism in art, music, and literature. But it was also a different way of thinking about time, of imagining the relationship between past, present and future.

Groups like the Russian Futurists nurtured ambitious hopes of breaking free from the burden of the past and building a utopian future. That was a century ago. What happens to the dream of the future once it is a part of the past? How do we remember the future? This talk looks at the life and legacy of Futurist poets like Velimir Khlebnikov and Vladimir Mayakovsky as a way of exploring the paradoxes of ambition and nostalgia that shaped the twentieth century and still resonate today.

Jamie Rann is Teaching Fellow in Russian at the University of Birmingham. He is the editor and a translator of Subkultura, by Artemy Troitsky, about histories of resistance in Russia, and is currently writing a book about Russian Futurist literature.

See above for details about the film itself.

We will be joined by producer Paul Williams for a Q&A following this special preview screening chaired by Ian Anderson, Editor of fRoots Magazine

22nd October – After this Our Exile

Patrick Tam was another director to emerge during the Hong Kong new wave, and After this Our Exile is without doubt one of the best Hong Kong films since 1997. Set in an unspecified past, it is the story of a family, a father and a son, and the difficulty and disappointment of everyday life.  Another winner of Best Film at the Hong Kong film awards and the Golden Horse awards.

We are pleased to be able to screen the director’s longer edit of the film.

Five friends — a poet, an actor, a painter, an architect, and a film director – are five red avant-garde artists who try to find the embodiment of their hopes and dreams in the young Soviet state. The Revolution is boiling up like a bottle of apple cider: winged service dogs and heart-shaped potatoes, dead Semashko, the People’s Commissar for Health, and cheerful angels, love for the Tsar, and love for the young secretary Annushka, executions and pregnancies — everything is interlaced and inseparable!

1934: the legendary Communist fighter, the beautiful Polina-Revoluzia, is asked by the newborn Soviet government to bring order to the north of the Soviet Union. The shamans of the two native populations, Khanty and Nenets, refuse the new ideology. Polina convinces five of her friends to go with her, former colleagues-in-arms who have now become metropolitan artists: a composer, a sculptor, a theatre director, a Constructivist architect, a famous director. They will have to try and reconcile the culture of the Russian Avant-garde with the Ancient Paganism of the peoples who live in the virgin forest around the great Siberian river Ob.

The film is based on a true story.

See above for details about the film itself.

We will be joined by Matt Johnson and Johanna St Michaels for a Q&A following the screening on Mon 23 Oct at 18:10.

This film will be followed by a post-screening discussion led by Dalia Mostafa, Lecturer in Arabic and Comparative Literature at the University of Manchester.

Although she remains largely unknown in the UK, Dalida was France’s best-selling female singer in the 20th century and a much-loved artist throughout Europe and her native Middle East. Her versatile music output, which spanned a 1950s Latin style, 1960s yéyé rock and 1970s disco, ensured her success and epitomized an oft-mocked Euro-pop sound.

Yet her tragic private life, marred by the suicides of those she loved, also aroused the sympathy of her international audience and contributed to her immense popularity. Released to coincide with the 30-year anniversary of the singer’s death, the biopic Dalida foregrounds all the essential characteristics of a modern pop star: musical hybridity, glamour, showmanship, and vulnerability. A moving and unforgettable experience!

Grace Jones and Friends Live promises to be a thrilling and enlightening evening with the inimitable icon, as she discusses her life and work with some of her closest collaborators, from the worlds of music, fashion, art and film, following an exclusive preview of Sophie Fiennes’ highly anticipated new film Grace Jones: Bloodlight and Bami.

Grace Jones: Bloodlight and Bami takes the viewer on an intimate and electrifying journey that moves between four cinematic layers — performance, family, artist and gypsy – to explore the fascinating world of this pop cultural phenomenon. Here we see her behind the mask as a daughter, mother, sister and grandmother, alongside taking to the stage for a specially commissioned performance, with legendary hits including Pull Up To The Bumper and Slave to the Rhythm showcased in full. Larger than life, bordering on cartoon, wild, scary and androgynous — Grace Jones plays all these parts.

In 78 setups and 52 cuts, the deliriously choreographed two-minute shower sequence in Psycho ripped apart cinema’s definition of horror. With a shocking combination of exploitation and high art, Alfred Hitchcock upended his own acclaimed narrative structure by violently killing off a heroine a third of the way through his film, without explanation, justification, or higher purpose.

We will be joined by director Alexandre O. Philippe for a Q&A following this screening.

After exploring the background to Psycho’s famous shower scene in 78/52, here’s a chance to put that carefully constructed murder in context with Alfred Hitchcock’s 1960 game-changer. Audiences that had come to expect horror in the form of Universal creatures or the Gothic flourishes of Hammer were stunned by Anthony Perkins’ all-too-recognisable monster, especially when the resulting chills were presented in such a deceptively simple style. A landmark genre film and a brilliant big-screen experience that seems to become more fascinating – and more suspenseful – the more one learns about it.