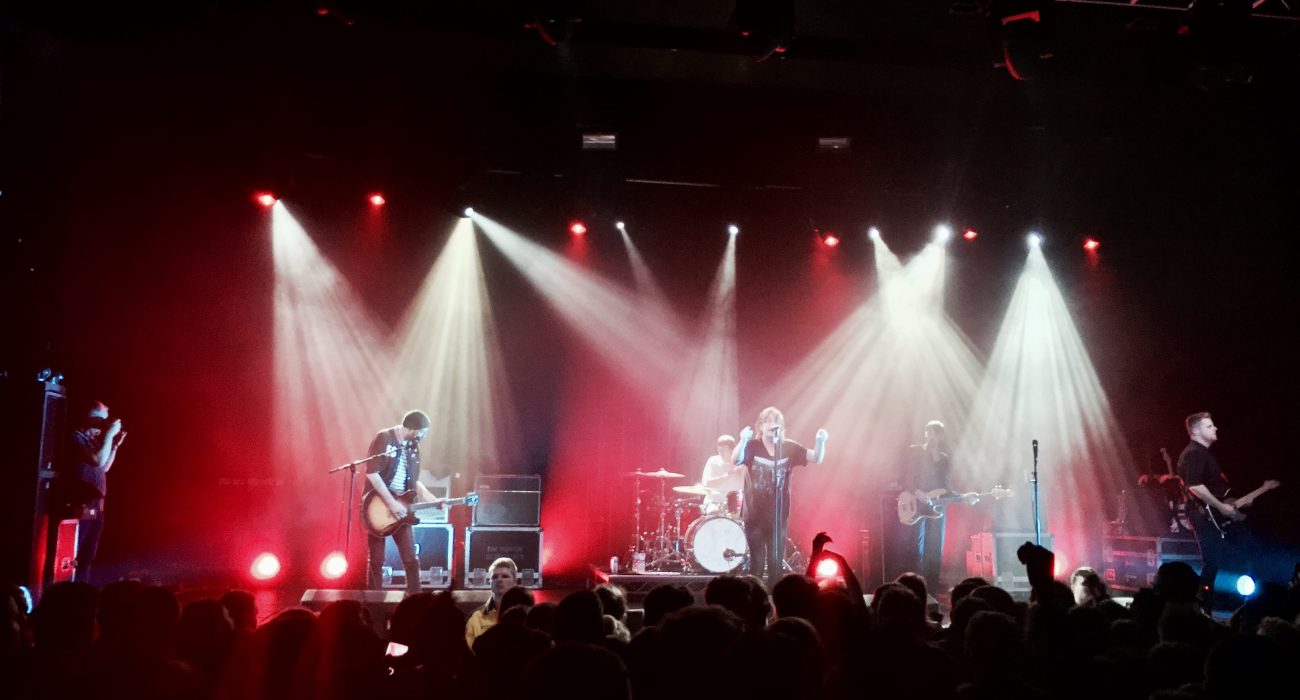 The Pigeon Detectives came to town on Thursday, kicking off their ‘Wait For Me 10th Anniversary Tour’ at Manchester Academy.

This particular album is one whose release decennial surely warrants celebration above any other from the band: Wait For Me is The Pigeon Detective’s most well-loved record and went Platinum in the UK. From as soon as it was announced the tour was sold as an authentic recreation of the album, all other songs barred, just the favourites: an exciting enough prospect for any fan.

And why not? After a proper rock band stage entrance — drums first, bass, guitar, then after some extension, singer — the Leeds five-piece wasted no time in ramping up the energy of the show, opening with pacey fan favourite ‘Romantic Type’.

Singer Matt Bowman, in particular, came out all guns blazing and had already ripped his shirt off, jumped off a huge stage amp and dived into the crowd during the very first song, something I’ve honestly never seen before. An incredibly lively atmosphere was provoked instantaneously.

The opening kept going strong. ‘I Found Out’ next, pounded guitar chords jostling around the crowd. Matt, in true frontman style, was jumping about, wildly swinging around his microphone in enormous arcs and catching it again with impressive accuracy.

From there the next group of songs were slightly less enthusiastically received by the crowd, some lesser-known album tracks and B-sides. Matt kept the crowd going with some hilarious chatter between songs, however, and once they were out of the way it was back to the hits for a storming second half of the show.

The indie rockers thrashed out 18 songs, each intensely short and sharp, at a furious pace. ‘Take Her Back’ and ‘Wait For Me’ were particular highlights, and the encore ending on ‘I’m Not Sorry’ was a lung-busting blast too.

Frontman Matt certainly kept the energy levels high and the crowd excitable, although the other band members seemed to lack the same outward enthusiasm, remaining fairly static throughout, perhaps an effect of the show being the first of the tour. Regardless, the music they produced was highly energetic — there can be no criticism of their involvement in that aspect.

All in all, The Pigeon Detectives put on a great show, as they are often known to do. This anniversary tour is certainly not a case of the band holding on to the past too firmly; rather it’s a brilliant opportunity to see live performances of the greatest songs the band has ever produced. Despite any inconsistencies — in setlist or band — that aim is certainly lived up to. Wait For Me was worth the wait once again.