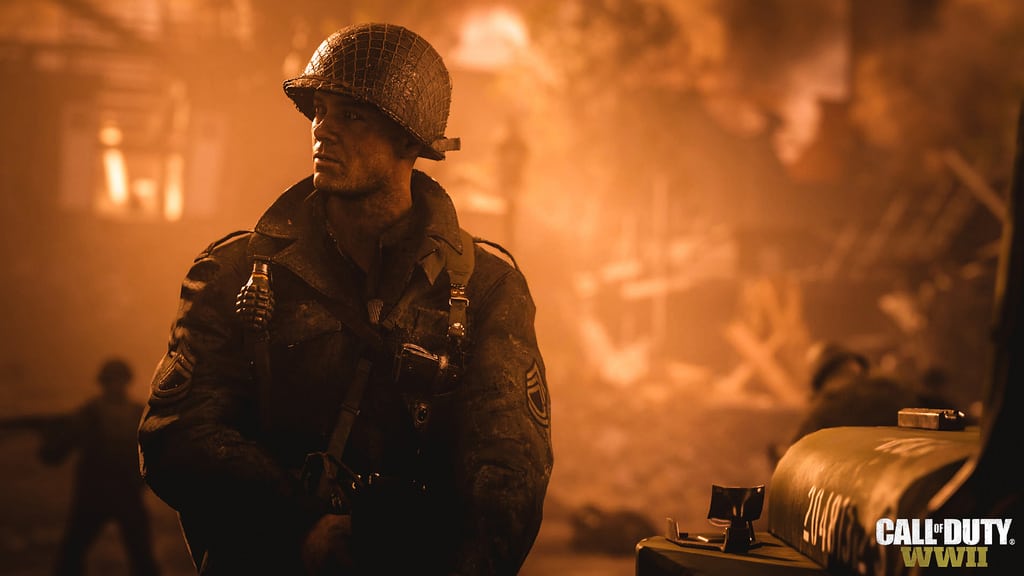 2016 wasn’t a great year for the Call of Duty franchise. Infinite Warfare vastly under performed in sales despite Activision’s dastardly tactic of holding the remastered version of fan favourite Modern Warfare hostage.

People who wanted to play Modern Warfare Remastered could only do so by buying the £70 deluxe version of Infinite Warfare. Activision became your mum, only letting you go to the park if you took your awful little brother along with you.

The general consensus seemed to be that everyone was burnt out on futuristic warfare, so developers made the wise move to return to the franchise’s roots with a WWII game. Enter Call of Duty: WWII after three years of development — much of which was no-doubt spent thinking of the name.

WWII’s campaign is probably the best Call of Duty story since the Modern Warfare series. I’m not sure whether it’s because of genuinely engaging character development or just the fact the series is finally grounded in history again, but I found myself really quite attached to Daniels, Zussman, and Turner.

I was expecting most of the narrative to consist of the usual superficial American centrism. Whilst there was a lot of this, there was also a tactful treatment of the darker aspects of war. American soldiers will comment that the dead German soldiers on the road were just guys with mothers like themselves, characters speak of how their superiors see them as dispensable, and when undercover, you overhear German women in a toilet talking about whether they’ll ever get to see their spouses again.

Graphically, the single player is where WWII shines. The missions take you from the beaches of Normandy, to the streets of Paris, to the snowy Ardennes Forest — and they’re all truly beautiful environments.

I don’t want to overstate it — it’s still the classic Call of Duty cinematic sequences. Time still conveniently slows down so you can kill multiple fully-armed Nazis with just a handgun. You still have the obligatory tank mission and chase scenes, and you still spend an obscene amount of the game with a blurry screen, ears ringing as your commander shouts your name in the background.

However, WWII did impress me with its addition of a stealth system to the game. It’s a pretty basic mechanic — enemies have a meter above their heads which displays how close you are to detection — but even little changes make a big difference to a series on its fourteenth instalment.

The best implementation of stealth is undoubtedly in the mission “Liberation”, which sees you play as Rousseau, a female leader of the French resistance who goes undercover amongst Nazi officers. It has a real Inglorious Basterds feel, and the speech-based gameplay in which you have to remember your cover story is a nice break from the gun-play.

Another good addition to the series was the new health system. You no longer magically heal over time from being shot multiple times in the chest. Instead, you request health packs from certain members of your squad. The same system is in place for ammo, grenades, and smoke signals to call in airstrikes. This forces you to stick with your comrades, and strips you of the immersion-breaking ability to charge around on your own like a super-soldier — my usual go-to tactic for Call of Duty campaigns.

The campaign is definitely an experience that deserves a headset. The music and sound effects are both great. Wilbert Roget II has succeeded in composing one of the best Call of Duty soundtracks to date, and the gun sounds are all crisp and satisfying. This was a relief, as Call of Duty developers seem to flip a coin every year to decide whether their guns will sound throaty and powerful, or like pathetic pea-shooters.

The game runs at 60fps, and aside from a few minor frame rate drops during hardware-intensive sequences, it manages to achieve its target. Smooth and responsive gameplay has long been a hallmark of Call of Duty games, and this one is no different. Both the campaign and the multiplayer feel delightfully polished.

The biggest pull of Call of Duty is, of course, multiplayer. WWII delivers magnificently, but in true Activision style, it’s not without its trademark anti-consumerism.

For example, WWII features a multiplayer hub area called Headquarters, which functions very similarly to the Tower from the Destiny games. It’s a fantastic addition. Players can face off in the 1v1 pit, go head-to-head at the firing range, or even throw a ball back and forth.

The issue is the way that loot boxes are insidiously woven into the headquarters experience. You now open loot boxes in front of everyone in the Headquarters, and you even get bonuses and challenges for watching other people open them. It’s a vulgar method of driving micro transactions — an attempt to transform players into walking billboards for paid content.

Worst of all is the fact that the Headquarters area is situated on the beaches of Normandy — having these flashy loot boxes constantly fall out of the sky on one of the bloodiest sites of the Second World War feels tone-deaf to the point of becoming self-parodic.

Just as disappointing is the fact that the base multiplayer only contains nine maps, which feels awfully threadbare when considering that usually Call of Duty games ship with around 12-16. Presumably, this is because the new War game mode has its own three maps — but as these are only playable in the War game mode, this isn’t really much of a consolation.

What makes the lack of maps truly unforgivable is the fact that the first map pack has already been announced for January, and it consists of some maps that players have discovered are already in the core game’s files. That’s right — Activision have cut content from the game in order to sell it back to you at a later date.

Regarding the War game mode itself, it really is a welcome innovation to the CoD franchise. The matches are quite a bit longer than other game modes and borrow elements from more objective-based shooters like Overwatch and Battlefield.

Players battle it out over multiple objectives on large maps. If the attacking team can complete an objective within the time limit, the defenders must fall back to a further part of the map to defend the next. It’s exactly the kind of objective-driven gameplay Call of Duty was lacking, and gives casual players who perhaps aren’t as good at killing a chance excel as part of a team.

Unfortunately, the multiplayer experience has thus far been plagued with server issues. The Headquarters area is currently always empty, matches disconnect from the server, and the waiting time for joining lobbies was so long that I began to wonder if Activision had used real WWII-era technology for their network infrastructure.

When I did get to play, the experience is near-flawless. Partying up with friends is effortless, and Call of Duty once again demonstrates why it’s such a leviathan of Multiplayer games: it’s refined, responsive, fast-paced, and accessible.

As a quick note on Nazi Zombies, it demonstrates how much the mode has evolved from being a bit of side content that only briefly holds your attention, to its own fully fleshed-out experience. Only two maps are available — a tiny house reminiscent of the original Nacht der Untoten map from World at War, and a much larger map full of explorable areas and easter eggs. It’s a testament to how much thought has gone into the large map that my first playthrough, despite only reaching round 14, took almost an hour, and we only managed to uncover a fraction of the hidden objectives.

Call of Duty: WWII isn’t revolutionary. It isn’t going to convert you if you’re sick of CoD, and it certainly won’t if you never liked it in the first place. What it does offer though, is a wonderfully polished addition to the series that innovates just enough to feel fresh and exciting, but not too much as to alienate its core audience.