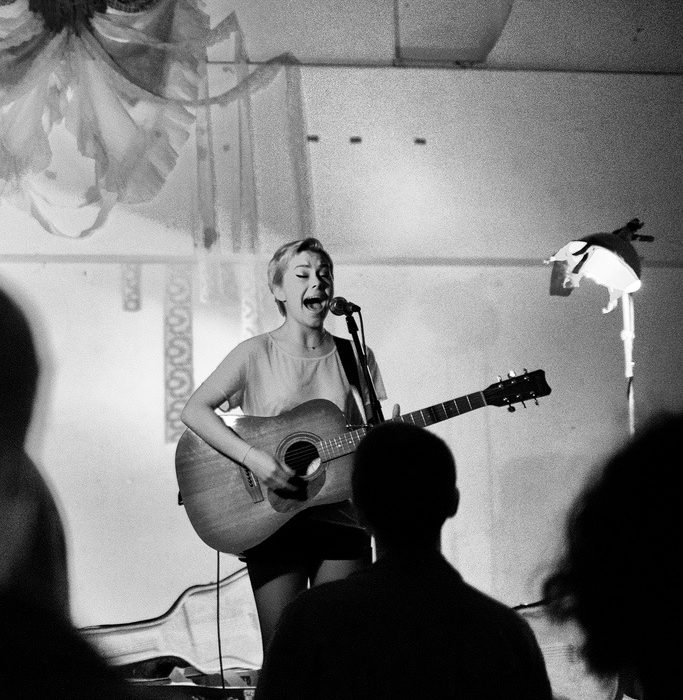 It was with some degree of trepidation that I began my interview with Phoebe Bridgers. The up and coming act of the moment, Phoebe has gathered plaudits from far and wide, and and has even been compared to Bob Dylan. Her lyrics are intensely personal, with an unusual honesty in a cultural sphere that seems to be more and more defined by irony. I went to meet her in Manchester at the start of her Europe-wide mini-tour. Cycling through the dreary Manchester night to my destination, it is safe to say that I felt some amount of pressure.

I needn’t have. Phoebe and Harry, the guitarist accompanying her on tour, are warm, personable, and likeable. They share a genuine passion for music and rattle off a list of musicians whom they admire. I ask about the comparisons with Dylan and the effusive praise that Phoebe has received in the press.

“Nobody’s Bob Dylan, you’ll just never live up to it… I’ll fucking take it though,” she replies. I ask what incarnation of Dylan she most enjoys and is slightly surprised by the answer: “obviously I like the classics… but recently I’ve been listening to a lot from his Christian period. There are great things hiding in the Christian albums.” I am left with the impression that both Phoebe and Harry are genuine lovers of music with eclectic tastes.

We talk a little about her upbringing and her love of music from a young age. Brought up in Palo Alto, her mother was somewhat of a “momager”, always encouraging her to go to festivals and nurturing an interest in music. Given a significant amount of creative freedom as a child, Phoebe went to a “non-conventional” school where creativity was encouraged.

This independence of mind is apparent in her political views. She is neither rude nor imposing, but unafraid to say what she thinks when I broach the topic of modern American politics. Her response is unequivocal: “It’s super-split. It’s hard for me to see a way out of it as a lefty because how are you going to hold a reasonable conversation with somebody who thinks that all Muslims are terrorists… There’s no sugar-coating it anymore.”

An ability to be forthright is clearly present in her lyric writing. Bridger’s lyrics are of the very rawest kind. They tell tales of teenage emotional anguish, as part the angsty Bildungsroman that is Stranger in the Alps. “Jesus Christ, I’m so blue all the time/ And that’s just how I feel/ Always have and I always will/ I always have and I always will” she sings on “funeral”, a song about the death of a childhood friend.

Crooning with resignation over such words, Bridger’s voice is, at times, majestic. Resignation isn’t Phoebe’s only calling card and throughout the album, she sings with intensity, regret and anger. The music is best described as a blend of lo-fi rock and folk, spacious and at times dreamlike, interlaced with the delicate but brooding intensity of her vocals and lyrics. Safe to say, there is a great deal of sadness; she does not shy away from difficult emotions.

I ask if it can be strange meeting journalists and fans and knowing that they have read such personal lyrics. “I have to look people in the face and know that they know all those words that I said… It’s not like what does this mean it’s more like oh, she’s literally telling me that.”

The gig itself is fantastic. The venue is packed and Bridgers has an easy rapport with the crowd. She starts with ‘Motion Sickness’ and the assortment of people that litter the room are engrossed. Teenagers, 20-somethings, the middle-aged, men and women are all in attendance; there is nothing easily definable about the crowd. It seems the Bridgers music appeals to a large cross-section of society.

Her voice is remarkable, a heady mixture of vulnerability, anger and intensity, delivered with a pure, crystal clear tone. A rendition of Radiohead’s ‘Fake Plastic Trees’, amid the plethora of her own fantastic songs, is particularly memorable.

As the gig ends and I leave the venue, I ponder what sets Phoebe Bridgers apart from the rest. She has affecting, melodic, atmospheric music, a rare voice and clear talent. Nevertheless, I think what really makes her stand out, and attracts followers from all walks of life, is the unabashed way in which she sets out her vision. Bridgers doesn’t hold back. She is not scared to say what she thinks or to set out how she feels. This is the “gothic heart” that lies at the centre of her melodic, atmospheric folk.

Bridgers work is marked by creative freedom. She’ll be around for a very long time.