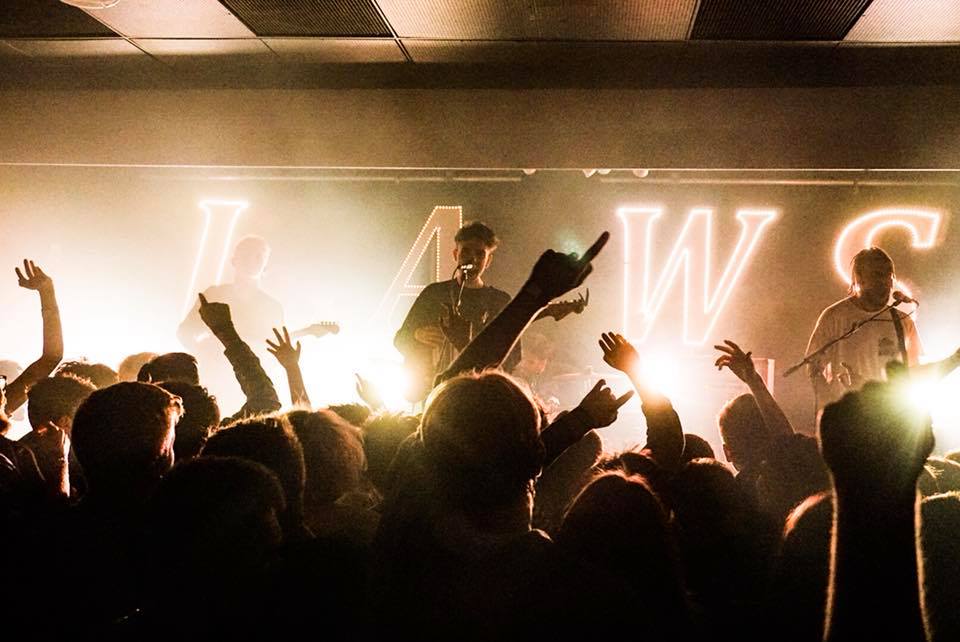 JAWS are a Birmingham-born quartet who effortlessly fuse nifty guitar licks, laced with reverb distortion, with angsty and raw lyricism creating songs that linger in your subconscious for weeks. Singer Connor Schofield — who’s currently residing in London whilst balancing an internship in fashion PR with his musical career — offers an insight into future plans for the band, the importance of mental health and the music industry itself.

James Bond, and there’s no real reason why to be honest. I guess I was thinking of character’s names and that’s just what it ended up being.

I used to really love the band Brand New but then the singer’s a paedo so I can’t back that anymore. I’m quite open-minded with music so I could happily sit and listen to this (Connor gestures to the DJ in the pub playing heavy metal) but then also listen to bands like Diiv or King Krule.

3.       I’ve noticed quite a lot of maturing in your sound from ‘Be Slowly’ to ‘Simplicity’- Would you agree?

Yeah, I guess it’s different life experiences. When you make your first album, it’s not like you’re in a band 24/7 compared to when you’re making your second when you are. That makes it all a bit different because you have different things to write about whilst also gaining more confidence as you get better at songwriting. You feel like you can try and experiment a bit more as well.

4.       In terms of the lyrics of your songs, they’re gritty. Even the themes within that e.g.  mental health, growth. Do you think it’s important that topics such as mental health are expressed through music?

Yeah, I do think such topics are important but it’s not meant in a selfish way. I don’t sit down and think right I need to write a song about mental health, instead, it’s about personal experience. Obviously, it’s important to talk about and to make people feel comfortable enough to talk about it.

5.       Linking into that, you’ve just released a video for ‘17’ along with adding it to your setlist. What was the inspiration behind that?

Me and Morgan sat down and decided we needed to do a video for this tune that doesn’t detract from the actual meaning. I didn’t want to romanticise it and I wanted to get a perception of how it actually feels, I think he did a really good job.

I really don’t know. I’ve written so many songs…

Would it be one that you’ve already released or perhaps a new upcoming one?

Actually, there is some new, pretty cool JAWS stuff. When we released Simplicity, that was my favourite but once it’s been out for a while, you kind of get sick of it a bit and you feel like since then you’ve written better songs.

Yeah like some of the new JAWS stuff I just like a lot more but my favourite one is probably What We Haven’t Got Yet or The Invisible Sleep.

7.       Did you find that your writing process changed with ‘Simplicity’ compared to ‘Be Slowly’?

The writing process is always a bit different, a lot of the time I’ll make a demo of the song then I’ll bring it to the band and we’ll build on the more intricate bits. I’m quite an impatient person, I never want to drag it out. When I do a demo it’s always verse, chorus, verse, chorus, end but we properly sort it out when we’re all together. If there’s no structure there in the first place, we’ll never get anything done and we’ll get stuck in a loop.

I think recently Frank Ocean. I mean he’s not signed is he which is amazing so he’s quite an inspiration.

Well I mean neither are you guys, are you?

Yeah, we’re not signed but it shows you don’t need it really. As long as you’re good, nice and have your head screwed on.

Is being signed something you want?

Nah, you don’t need it, everyone has it as a status thing. I make the same money as signed bands, the only difference is my money is my money, it’s not a debt from a record company that I’ve borrowed.

Well it’s just fun, isn’t it? We’ve all got jobs so it’s just nice that a couple of weeks every year we can come in, do this and play to a load of people. Doing larger venues would be nice but I’m comfortable with the size we’re already doing. It is what it is. Everyone wants to be in the biggest band in the world but…

10.   Are you working on any new material at the moment and what can we expect from it?

We’ve not set ourselves a deadline to meet, we’re just doing what we can when we can. What we’ve written so far is in the same world but it’s better. Because we’re so proud of Simplicity we don’t want to put anything out there that isn’t at least as good, if it takes a couple of years then so be it. That’s another thing about not being signed, I mean you can’t just disappear because people will forget you but we have less pressure. We have a plan.