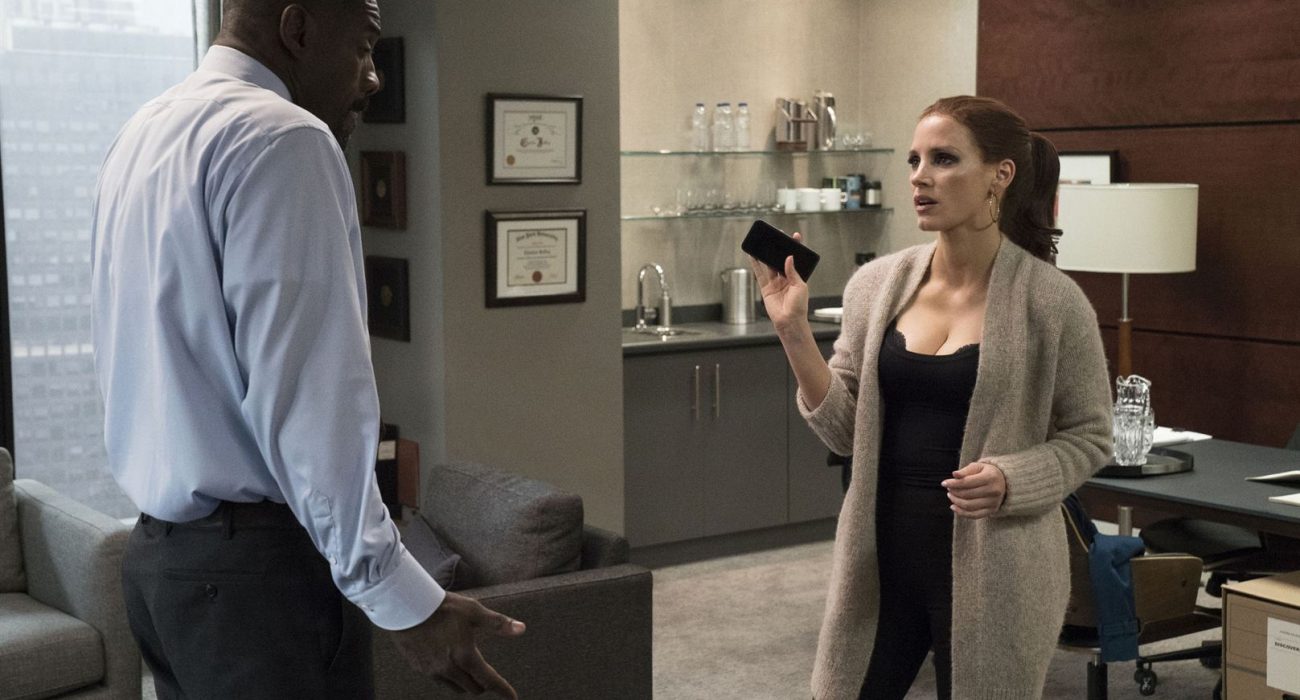 With films like Battle of the Sexes and I, Tonya being recently released, Molly’s Game had to be spectacular in order to stand-out. All three are biopics featuring strong, career-driven women (something which, let’s be honest, is hardly shown well on-screen). Yet the latter has something the former don’t; a witty and rapid-fire dialogue written by Aaron Sorkin.

The high-stakes movie focuses on Molly Bloom (Jessica Chastain), an Olympic-class skier turned waitress who in turn finds herself running highly exclusive underground poker games. Players included the super-wealthy members of the elite; athletes, actors, business-titans, and eventually the Russian mob. Fast forward a decade, Bloom is arrested in the middle of the night by FBI agents for colluding with said mob. She turns to criminal defense lawyer Charlie Jaffey (Idris Elba) to help her. The thrilling tale is interwoven in two timelines; past and present, with the past illustrating Bloom’s tumultuous relationship with her father as well as her journey to the world of underground poker.

Chastain highlights Bloom’s transformation as a meek twenty-something novice to a self-assured businesswoman phenomenally. The character itself is excellently written with character growth being key. Starting with steely-eyed silent observation, the change into the “Poker Princess” is well-articulated and realistically portrayed as Chastain weaves her way through each poker scene with compelling intricacy.

The pairing of Chastain with Elba is intriguing to watch, as the two have a great dynamic and undeniable on-screen chemistry. Their wise-cracking scenes are thrilling to watch; for anyone else, the script would be almost suffocating but both actors manage to deliver the rhythm of “Sorkinese” excellently. Elba has some of the most dramatic yet memorable scenes in the movie, and it’s really a shame there isn’t more of him in it. The two characters definitely bounce off each other with outstanding line delivery, which is crucial with a script as rapid-fire as this.

Sorkin himself is known as the powerhouse behind the scripts of The Social Network and Steve Jobs and that same over-the-top showiness has been worked into the script of Molly’s Game. It’s the same smart and complex narrative that packs a lot of information into a more than two hour long movie, yet Sorkin manages to make it all understandable to someone who knows nothing about poker (such as myself). The walk-and-talk technique — a Sorkin idiosyncrasy — fits well with the effortlessly smart Molly Bloom and Chastain works wonders with the masterful script. A rapid-fire dialogue ensures that Bloom is an unforgettable female character; one who is dynamic, entertaining, and multi-dimensional. For a debut, Sorkin’s directing is good, yet just as he has done with this screenwriting, he needs to find a distinctive directorial style. Yes, the movie is elegant in portraying the high-class and super-wealthy but the visuals are unoriginal and need more fine-tuning. Similarly, at times, the script feels a bit too preachy.

Moreover, Molly Bloom is a captivating character, yet in a bizarre ten-minute scene in which three years of therapy is given by Bloom’s over-bearing father Larry (Kevin Costner) all of this is undone as it’s revealed that everything basically boils down to her daddy issues. Said scene is played brilliantly by Costner who manages to make everything slightly more believable. Nonetheless, at this point, the script felt heavy, and – dare I say – almost clumsy as a clichéd redemption arc was somewhat forced into the movie. Essentially, Larry Bloom mansplains their fractured relationship to Molly and undoes all that was so enthralling about her. As a result, the ending is slightly underwhelming, especially after such a strong opening scene.

Additionally, there are certain scenes which felt rushed over and needed more grittiness in order to really hit home. Molly develops a serious drug addiction to help her function yet this is hastily overlooked. It could have easily been used to further flesh out her character. Sure, the themes of legality and morality are dealt with, but showing the darker side of gambling in much more detail would have been fascinating to see.

Brilliant acting interwoven with themes of power, poker, and morality, Molly’s Game shows the true trials and tribulations off being a woman in a man’s world with Molly herself being the most endearing to watch.