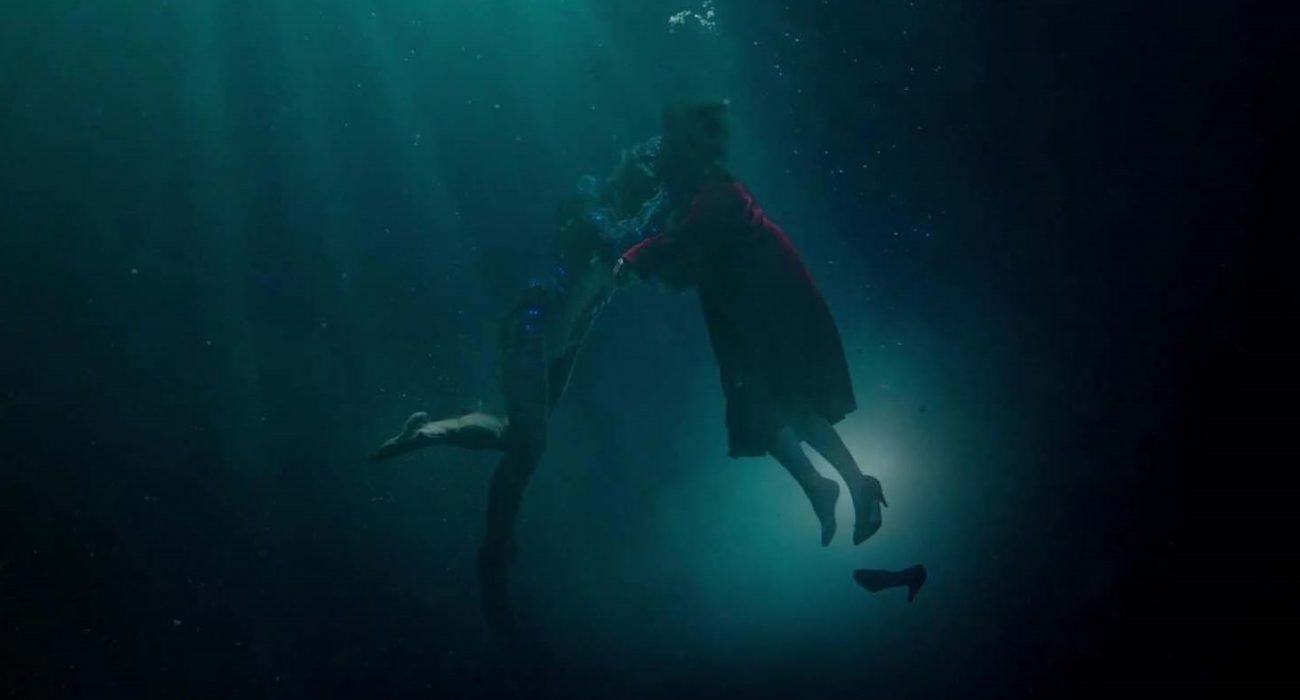 A true master of the cinematic fable, Guillermo Del Toro’s career bloomed with Cronos in 1993 – a supernatural tale with a biting subtext on South America’s relationship with the United States, before he delved into the Spanish Civil War in The Devil’s Backbone (2001). Two years after subverting the superhero genre in 2004 with Hellboy, he returned to Francoist Spain to create Pan’s Labyrinth. It was this 2007 Academy Award winner which has since been regarded his masterpiece, and was presumed to never be bested by the Mexican auteur. Or so we thought.

It is Cold War United States. Elisa (Sally Hawkins), a mute cleaner employed at a Baltimore military research facility, lives contently yet quietly in a flat above a cinema. Her neighbour is a struggling artist who is a closeted homosexual and her only other friend is Zelda (Octavia Spencer) – her vivacious African-American colleague whose entertaining rants fill the void left by Elisa’s aural impediment. One day, whilst scrubbing the floors of a laboratory, the two women stumble across a mysterious, humanoid amphibian, held by the government for scientific purposes. Elisa rapidly develops a bond with the creature through sign language, but the malign intentions of Michael Shannon’s Colonel Strickland spell peril for the creature and the love blossoming between the pair. Aided by her neighbour and Zelda, Elisa hatches a plan to rescue the creature.

Upon first glance, it might seem like a Spielberg-esque action picture, but this could not be further from the truth. As are all of Del Toro’s greatest works, his latest project is a tale in which romance is the driving force, and it is its partnerships with horror and the fantastical which gives the director’s films such fervour and ingenuity. The first encounter between Elisa and the creature echoes that between Ofelia and ‘El Fauno’ in Pan’s Labyrinth; both moments of fear but also beauty and awe (interestingly it is Doug Jones who plays both creatures, as well as Hellboy’s Abe Sapien – a character with an eerily striking resemblance to Jones’ latest amphibian).

The way which Del Toro transforms something so monstrous into a source of such endearment and tranquillity is astounding, but in The Shape of Water he builds on this, throwing romance into the mix. In live action it is infinitely difficult to attach love to an inhuman creation such as this amphibious creature – a problem 2017’s Beauty and the Beast faced – yet Del Toro pulls it off sublimely. Eyebrows may be raised at the idea of a woman and a scaly ‘fish-man’ being romantically involved, but not once did I find myself questioning the ethics of the relationship. Everything about the scenes which the two characters share is just mesmerising and Del Toro, just as he has done in previous works, somehow makes the unbelievable and preposterous completely plausible.

It is easy to draw parallelisms between The Shape of Water and Beauty and the Beast – but there are arguably equal similarities with James Whale’s Frankenstein (1931) and even Alex Garland’s Ex Machina (2015). The appearance and tone of the film is littered with nods and homages to cinema – the creaky, claustrophobic flats which Elisa lives in almost resembles the apartment building from Delicatessen (1991) and there are constant references to old Hollywood musicals such as Royal Wedding (1951). However, despite all the allusion and pastiche, this gem from Del Toro undoubtedly stands on its own two feet.

Michael Shannon is chillingly brooding as always, offering the narrative its oppressive, cold-hearted antagonist. Just like in all good fairy tales, there has to be a villain, and Shannon fills these boots effortlessly. His cruel desire to destroy something so beautiful in the creature and its relationship with Elisa harks back to the fascist Capitan Vidal in Pan’s Labyrinth, both characters embodying evil and greed.

At the heart of the film’s brilliance however, is Hawkins’ performance. It was a stroke of genius by Del Toro to cast the English actress as the lead – a decision which Hawkins has said she struggled to believe even during production. Despite receiving Best Supporting Actress nominations for her role in Woody Allen’s Blue Jasmine (2013), she is by no means an A-list star, and had one been cast as Elisa, The Shape of Water would have been an entirely different film, robbing the character of its sympathetic and understated charm.

After Three Billboards Outside Ebbing, Missouri, it appeared the Best Film Oscar would be a shoo-in for Martin McDonagh’s critically acclaimed drama. However, Guilermo Del Toro appears to have given the Academy real headache with this magical fairy tale which could very well blow its opposition out of the water.