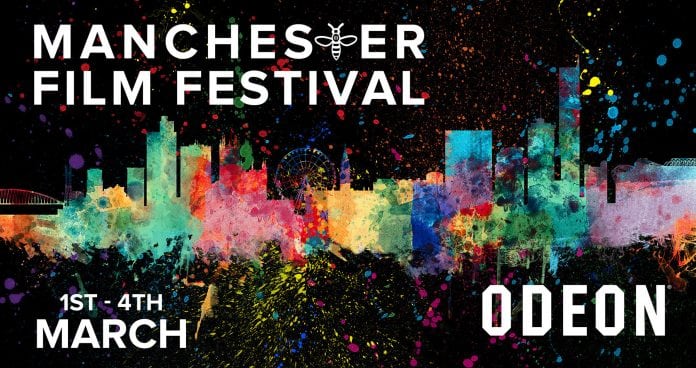 Last Sunday night was the night of the 2018 Oscars. However, another film event, which may have slipped your radar, was happening at the same time in Manchester. The weekend saw the return of the Manchester International Film Festival (MANIFF) — a four-day event showcasing some amazing independent international features and shorts both British and International, hosted by the Odeon Great Northern in the city centre.

The opening gala screening of A Painted Woman, a Western adapted from the novel The Mustanger and the Lady, a “western for women” about female strength and heroism in a harsh world, saw the opening of the festival off to a great start, and whose director, James Cotton won the award for Best Director on the Sunday Awards night.

Shia LaBeouf was a big name at this year’s event, participating in a Q&A “Filmmakers Studio” with project partners Nastja Rönkkö and Luke Turner in which they discussed the inspiration and process of their short documentary film and art project #TakeMeAnywhere, which screened on Friday.

Other familiar faces included Jonathan Rhys Meyers, who won Best Actor for his role in the spy thriller, Damascus Cover. Rhys Meyers, best known for his roles in The Tudors and Match Point took questions from the audience alongside the film’s director Daniel Zelik Berk in a post-screening Q&A.

More highlights and surprises from the festival included the psychological thriller Hippopotamus from director Ed Palmer. Hippo, described by Business Insider as “One of the 28 best films of all time that you’ve probably never seen”, stars Ingvild Deila, who plays Ruby, a kidnapped girl who wakes to find herself in a sterile basement unable to move her legs. Her captor, Tom — played by Stuart Mortimer —, explains that she is his captive until she falls in love with him.

Another stand out was Yoshua — about a group of kids hiding a mysterious blue alien in South Central LA,  which picked up the award for Best International Short. The Spanish language film Can’t Say Goodbye, which contends with the fractured relationship of two conflicted daughters and their father who is dying of cancer, took home the award for best foreign language film as well as the big award of the night, ‘Film of the Festival.’

Some themes from the festival seemed rather prominent — both the opening and closing gala films focused on the abuse of venerable women. Although from very different eras, both were approached in sensitive and important ways. It felt like an empowering statement signalling the importance of telling women’s stories especially in light of last year’s scandals regarding women and abuse in Hollywood. It could not have felt more relevant, but it also reflected the exclusivity of this independent festival.

The diverse nature of MANIFF was reflected not only in the films which were screened but in the experiences of the independent, young, and debut filmmakers who were present at the event. Micah Bijon (Yoshua) said, “the festival was an incredible experience, for 3 kids from South Central to know that, not everyone in the world wants you to fail.”

And Ed Palmer, Director of Hippopotamus said “MANIFF was a wonderful experience; four days jam-packed with great films, music videos, docs and animations, fantastic workshops, and events. Best of all it was an opportunity to rub shoulders with a vibrant mix of other filmmakers and enthusiasts.”

With local partners and sponsors, MANIFF has cultivated a solid place in the Manchester film cultures scene, resulting in a fantastic four days of good films and fascinating insights. For a festival only 4 years old which prides itself on showcasing independent cinema from both Britain and afar, it is clear to see how much of a success this year’s event was. It is truly a credit to the diverse and dynamic host city.