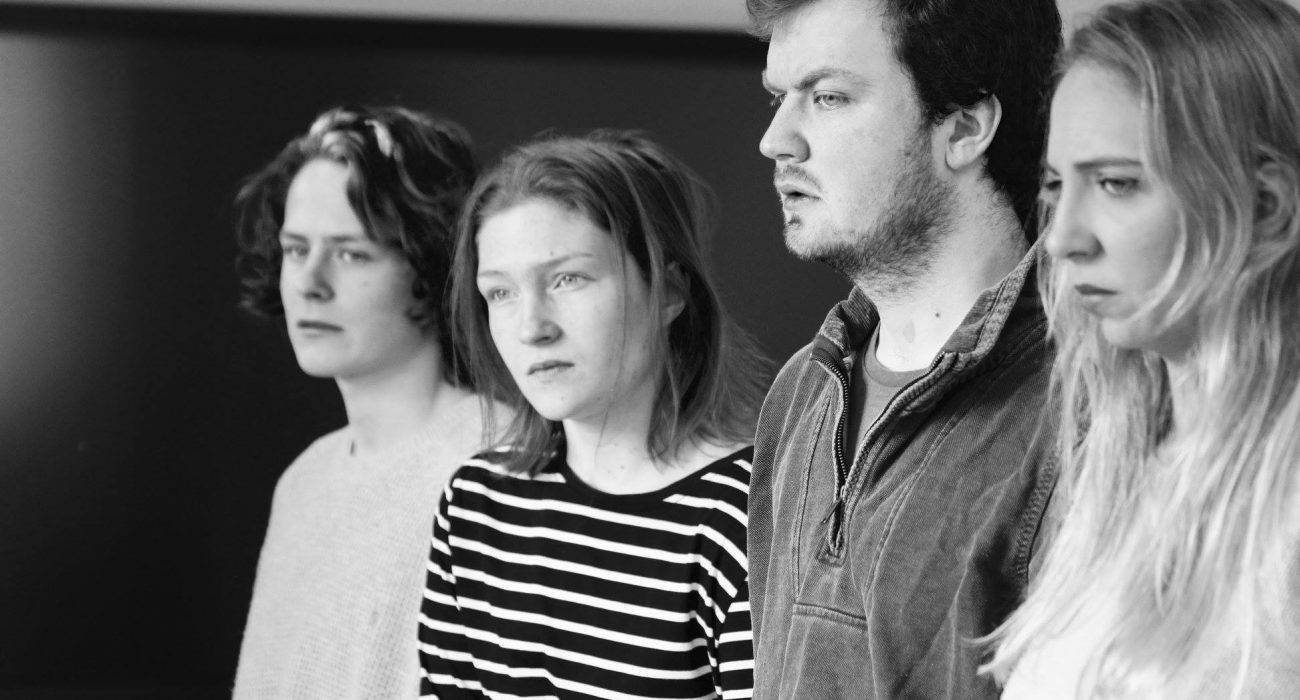 Alpha is the first performed work of Zoe Kent, a final year drama student at the University. The production was on at the International Anthony Burgess Foundation which was fitting for the play in its similarity to Burgess’s artistic themes.

Set in a buckling dystopian world at the height of totalitarianism, Alpha tells the story of six twenty-somethings who unfortunately find themselves to be the guinea pigs for the ‘Apple Scheme’, whereby, based on certain criteria, couples were forced together to marry and procreate. Kent’s play veers in interesting directions as each couple, in response to the impact of the Apple Scheme, transforms, deeply and darkly.

The set and was minimal and practical, intentionally lacking character connoted the warped one-for-all perspective. It was clear Kent had made the most of the venue by incorporating the stairs at the venue as a part of the set. There was an issue with the layout of the performance, with a few members of the audience just in front of the start of the tiered seating unable to see scenes where actors were sat on furniture or positioned on the floor.

I, fortunately, had a mostly clear view of the stage, however, as the speakers were positioned at the back of the audience, it occasionally drowned out some dialogue for me. There was an infrequent use of sound besides for The Guard, played by Will Bryne, audibly existent by an off-stage microphone; his lack of physical presence allowed the audience to build him up to be as intimidating as imaginable based on his dark and sordid voice.

As a compliment to Kent’s self-directed play, the couples were complimentarily cast and were very compatible onstage. The soft-spoken Martha Pryer handled Dora’s deflation and depression well, boosted by the support of Tom Bass as her husband Harold, who conducted the character’s kind-hearted nature, sorely impacted by Dora’s death, with professionalism.

Even in the latter half of the play as Harold’s stage time decreased, Bass was a reminder for their what-could-have-been successful relationship, even when partnered with the new wife Jen, played by Anna Robson, whose short performance was concise enough for us to know her character’s inflexible views on the scheme and her no-nonsense sensibility.

Ellie Stewart-Dodd and Tom Jones as Joy and Michael captured the fun and whit of a new relationship, carrying most of the comedic value of the production, and depicting the transition of their energies to their eventual violent state; a stand-out moment for me was when Jones menacingly travels across the stage to Stewart-Dodd, presenting Michael’s new unwavering dominance that Joy was so often able to bend and toy with.

Harriet Taylor and Rory Greenwood as Scottie and Frances followed the opposite trajectory — Greenwood’s Scottie was stern, unlovable and cold, while Taylor’s Frances was submissive but quietly strong. This couple’s transformation was most conflicting with my emotions, as Scottie begins to break down, physically and mentally, damaged by his appointment. Greenwood’s ability to manipulate the viewer’s sympathy was outstanding, and through this, we were able to see more of Taylor’s character, who I had hoped would fall for the softer, warmer, Scottie.

When we are left with Scottie and Michael and the voice of their new wives, the audience has the intuition that Kent’s world repeats and repeats, with new couples, in any part of the world. Kent’s play is versatile and leaves you with a sensation of relief for the present and a fear for what could be.