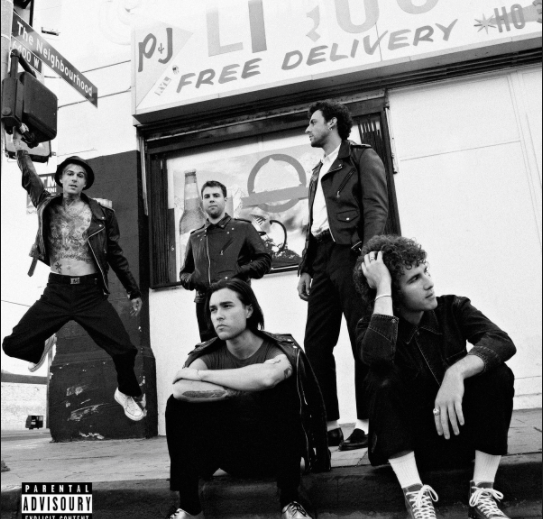 Delivering a third album that lives up to the success of previous work is no easy feat. Bands must feel an immense amount of pressure to consistently churn out music that maintains the captivating standard of their debuts. Unfortunately, gloomy Californian rockers The Neighbourhood have fallen short with their latest outing, the self-titled The Neighbourhood.

Yes, you read that correctly: their third album is given the eponymous treatment rather than their debut. And that’s just where the confusion starts.

After the release of two EPs over the last few months, it became clear that The Neighbourhood were going down a more electronic route. The ‘Hard’ EP, in particular, had some of the best songs that the band had ever produced, with the likes of ‘Noise’ and ’24/7′ bringing a slick mix of dark indie rock and summery synths. Unfortunately, neither of these massive tunes make an appearance on the album.

The album’s opener, ‘Flowers’, is serviceable but forgettable. ‘Scary Love’ is probably one of the few highlights on the album. It manages to create a solid R&B-come-techno atmosphere, built around lead singer Jesse Rutherford’s crooning vocals. There’s also a decent chorus, where the band actually managing to build to something rather than slumbering along another flat-liner.

Next up is ‘Nervous”’ and ‘Void’, both, again, unambitious slow-jams. ‘Softcore’ is an electronic synth track that injects some much-needed excitement towards the middle of the record. It’s the most confident exploration of electronic pop that the band seem to go in to since their EP tracks, and it’s just a shame that they don’t pursue this further.

Before you know it (because you may well have nodded off by now) you’re at the end of the album. Strap in, though, because the final song, ‘Stuck with Me’, is the saving grace of The Neighbourhood. Its slow build-up and gradual layering of keyboard-esque synths and fuzzy guitars prevents the LP from being a total snooze-fest, with the song even offering a nostalgic throwback to 2015’s ‘Crybaby’.

The Neighbourhood still manages to retain the monochrome aesthetic that the band have generated for themselves, but is lacking the excitement, emotion, and originality that albums I Love You and Wiped Out! brought forward. It’s disappointing to see that the hype around their EPs failed to transcend in the full-length release because that would have this a million times better. Not a complete failure, but definitely their weakest work to date.