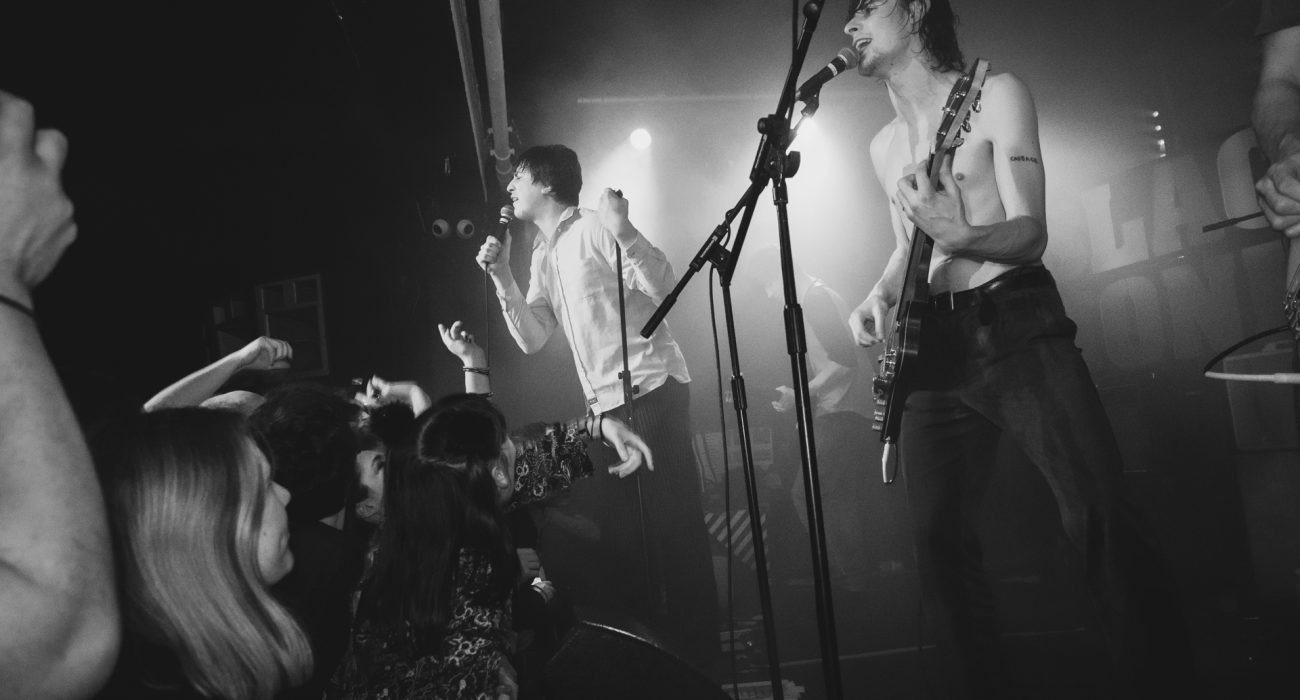 The chance for a seriously great night out offered up by headliners Cabbage at Glamour at the Ritz truly had promise from the start. It was not an opportunity to be taken lightly, as there was a great potential to bring together a number of bands in a collective space of boisterous energy and dynamic excitement.

However, I feel that my overall impression of the set, and the event as a whole, simply did not meet my (admittedly high) expectations. If the aim was to incite chaotic spontaneity, then I suppose this was partly achieved. Even this, i felt, still fell short of the mark. There was a distinct disorganisation and it lacked the fine-tuned performance I had anticipated.

I was initially optimistic upon entering the glorious Ritz venue which has hosted some pretty spectacular gigs over the years. Having been impressed by the cultish rigour and radical edge of their latest album Nihilistic Glamour Shots, I was awaiting the uproaring tone to fill and ultimately shake the venue. Unfortunately it just wasn’t meant to be on this sunny, sticky Saturday evening.

The gig began at the early time of 5pm. Nonetheless, it was quite busy — a testament to the reach that Cabbage clearly has across generational lines. I was intrigued.

The main innovation was to set up two stages. What seemed like a good idea on paper soon became evidently flawed in practice. There was a distinct lack of set timings which made the festival-esque event very difficult to navigate. Selecting which gig to attend was near impossible and was, for the most part, a guessing game. The far too small basement space was also frankly unbearable most of the time, and severely hindered the sets of some excellent supports.

The Blinders immediately set themselves apart from the innumerable collectives of noise. The punk aesthetic at times felt bland and overdone by other artists, but they kept it measured. Their performance was captivating, and they took me by surprise. They have a future ahead that looks beyond sentimentalities of punk rock that is so commonly bandied about.

It’s ultimately a shame when reviewing a headliner that their set can be so overshadowed by their supports. The shiny suited and glamorous PINS were the shimmering support act that took to stage just prior to Cabbage’s performance. The band clearly has some potentially great tracks but they drifted dreamily through their set list at an uncharacteristically slow pace compared to the rest of the gig.

The crowd seemed to lack interest in them and their fairly lacklustre performance style did little to inspire. It just wasn’t physically dynamic or particularly visually engaging.

Finally, after much build up, Cabbage took to the stage to deliver their highly anticipated set. The only thing that was blistering at this point was the extreme heat in the room. Seriously. It was a relief to hear Lee Broadbent’s vocals as they launched into the opening track ‘Preach to the Converted’.

The crowd was ready and scrambled into a frenzy of activity, thrusting forward with enthusiastic chants. This was just the start for an audience who mostly held their enthusiasm throughout despite the setbacks.

It was at this point in the evening where the stage finally had its moment to shine. The extensive set up at the back of the stage had been ignored by previous artists, but Cabbage became swarmed by the sheer size of the floor space, seeming to significantly shrink back away from the potential interaction with the crowd. They blazed through classic tracks from the well-produced ‘Gibraltar Ape’ to the once comical brilliance of ‘Dinner Lady’ which somehow managed to fall quite flat.

The final encore edition of ‘Terrorist Synthesizer’ did elicit some joyous memory of their powerhouse performance at Parklife but it was a case of too little too late. It was unfortunate then that the gig ended before its potential was truly realised.

Ultimately, the gig certainly wasn’t a typical Manchester band outing. The heat couldn’t be helped, but I fear that the impact they hoped for was simply overshadowed by uncertainty, chronically underused staging, and a stark dysfunction of creative vision.