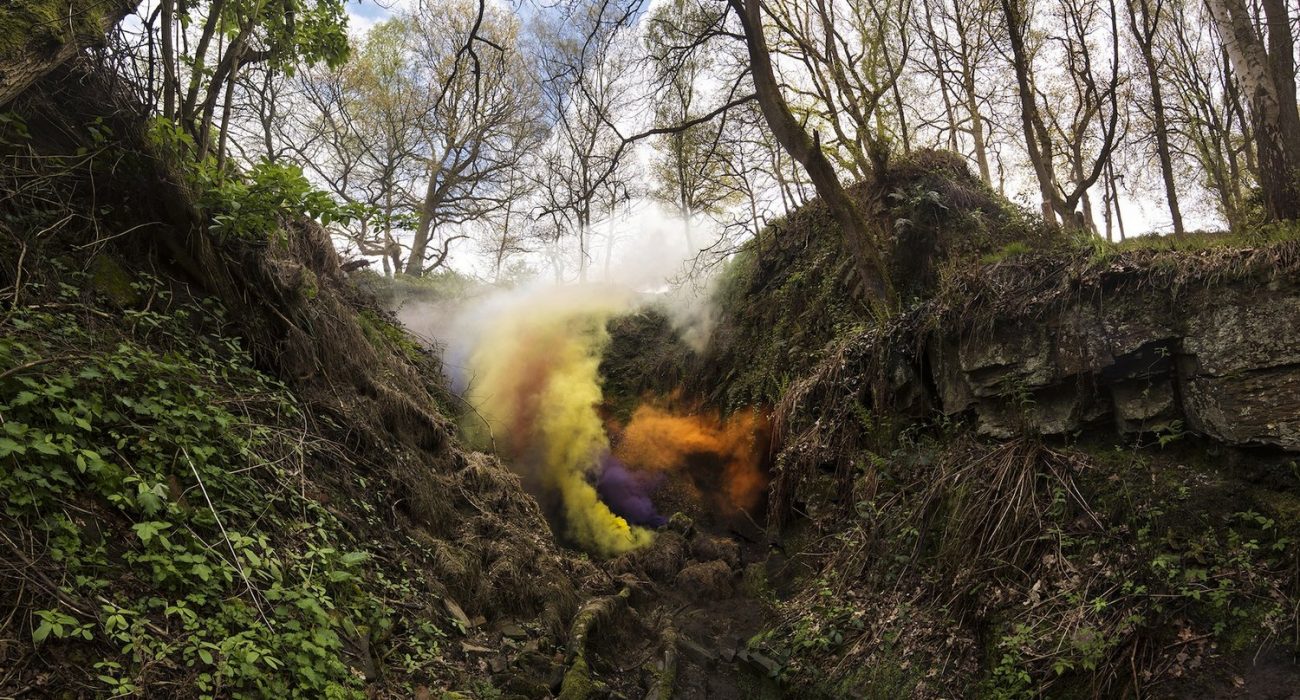 On the 7th of September, HOME opened its doors to the public for the first viewing of its latest exhibition: David Ogle’s Land/Lines. The exhibition combines both new and recent work produced as a part of Ogle’s three-year project, which seeks to encapsulate both visible and intangible aspects of the natural landscape.

Situated on both floors of the Granada Gallery, Ogle pairs photographic works alongside his geometrical paintings with powerful effect. The curation of the show clearly considered the continuity of line when hanging Ogle’s works. As such, his strongly contrasting styles bounce off each other, culminating in a striking exhibition. The high ceilings and open space of the gallery provides his large scale works with ample room to stand back and consider, only adding to the poignant force of the landscape that he captures.

When speaking with Ogle, he describes how he aims to “capture a moment” following his “quick interventions into the landscape.” We consider his photographic work, ‘Sail’ (2015), which is displayed on the first floor of the gallery. The striking photograph taken on a beach in Merseyside’s Ainsdale Nature Reserve focuses in on a plume of smoke which ascends in a perfectly upright direction. Ogle recounts how he felt the image froze a momentary lull in the atmosphere, whereby the wind does not impede the direction of the smoke, resulting in an “unearthly and impossible” effect.

Ogle describes how he believes this effect “articulates something very specific to the landscape” of his works: they document a split-second which no longer exists beyond the photograph.

Whilst Ogle claims the works seek to depict the “untouched landscape” void of human evidence, he admits that he enjoys how the process of his work can be “accidentally performative”: a late-night dogwalker may experience his ephemeral smoke experiments whilst on a solitary stroll.

When considering his piece ‘Lunar’ (2015), Ogle describes how he selects a line as an abstraction of the landscape he is capturing. As such, in ‘Lunar’, the eye is drawn to a glowing acrylic sphere resting in a sand dune, which is evocative of “sunlight and moonlight.”

His photographic works, however, deeply contrast his adjacent drawings, whose premeditated and mathematical characteristics are in opposition with the spontaneous and experimental element of his photographs. However, the media of graph paper and collage in his drawings, whilst not evoking the same sense of freedom, do capture the essence of the landscape.

Ogle informs me that these “very precise” large-scale drawings are based on a series of past sketches. In this way, he seeks to “identify areas of the landscape to translate” into his larger works. Ogle claims to “like the change” that comes along with working with a variety of artistic media: his exhibition at HOME highlights how he is “consistently responding to space and place.”