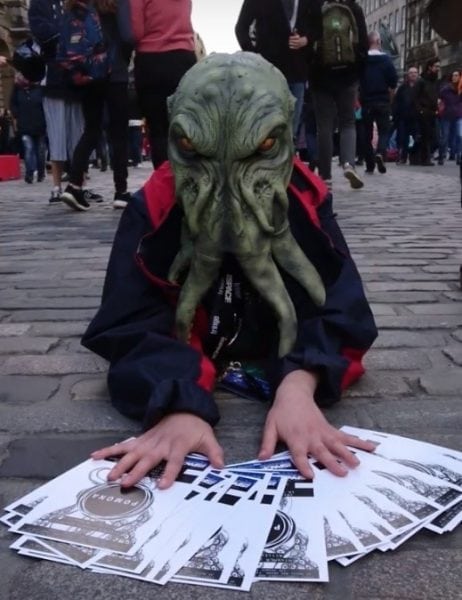 Tales from the Fringe: Pomona

This summer I served as one of two producers on the UoM Drama Society’s production of ‘Pomona’. This Manchester-based thriller, set around the mysterious and real island of the same name, is written by UoM alumni Alistair McDowall.

I was a producer for the society’s Freshers production of Pomona last Autumn, the cast and crew of which reprised their roles for the Edinburgh run. Following the major success of our original run in Manchester, the directors decided to launch a successful bid to take the show to the Fringe. The impetus for this being a sell-out show and several awards won at the society’s Christmas Award Ceremony.

Our time in Edinburgh was a rollercoaster of emotions and experiences, both in and outside of the venues. The most troublesome prop for both runs (other than a highly elusive pack of Quorn chicken nuggets) was a single mattress. During our Manchester run, the mattress became infamous as we had to carry it from the main university campus to Salford. Due to logistical difficulties we had to carry this mattress, plus three wooden chairs, 2.2 miles right through the centre of hilly Edinburgh, fighting the late-night Scottish crowds and weather.

Another trial that we had fun with was flyering and promoting our show. Most flyering at the Fringe takes place on the Royal Mile, a busy and steep pedestrianised street that runs down from Edinburgh Castle. Talking at people and holding out A5 sheets of paper is not enough to get people to come. Beyond our natural charm, several of us donned our Cthulhu mask to grab people’s attention, whether that be by spooking their children or dancing along to the music of street performers. While many of us lost our voices at varying points of the week we still managed to shift an impressive four thousand flyers within six days and were rewarded with our audience steadily increasing and a sold-out final performance.

Our venue, theSpace Triplex Studio, was fittingly located in a basement, providing intimacy with our collection of dark, oddball characters. The run itself proved highly successful, a review of our opening night awarded us an incredible five-star review. Our cast and crew were overjoyed and ecstatic that the talent in our amateur production was praised. We were also chosen as one of six editor’s picks on edfringereview.com for the final week of the Fringe.

My favourite fringe show aside from our own was ‘Cream Tea and Incest’. This theatrical comedy revolved around aristocrats in 1914 England manipulating and murdering each other for personal gain. The eccentric characters and light-hearted humour as well as the shows’ self-awareness kept me engaged and highly entertained.

Overall, the Fringe this year was an incredible experience and I look forward to going again. Next time though I shall go unattached to a show so that I have more time to discover and plan what shows I would like to watch.