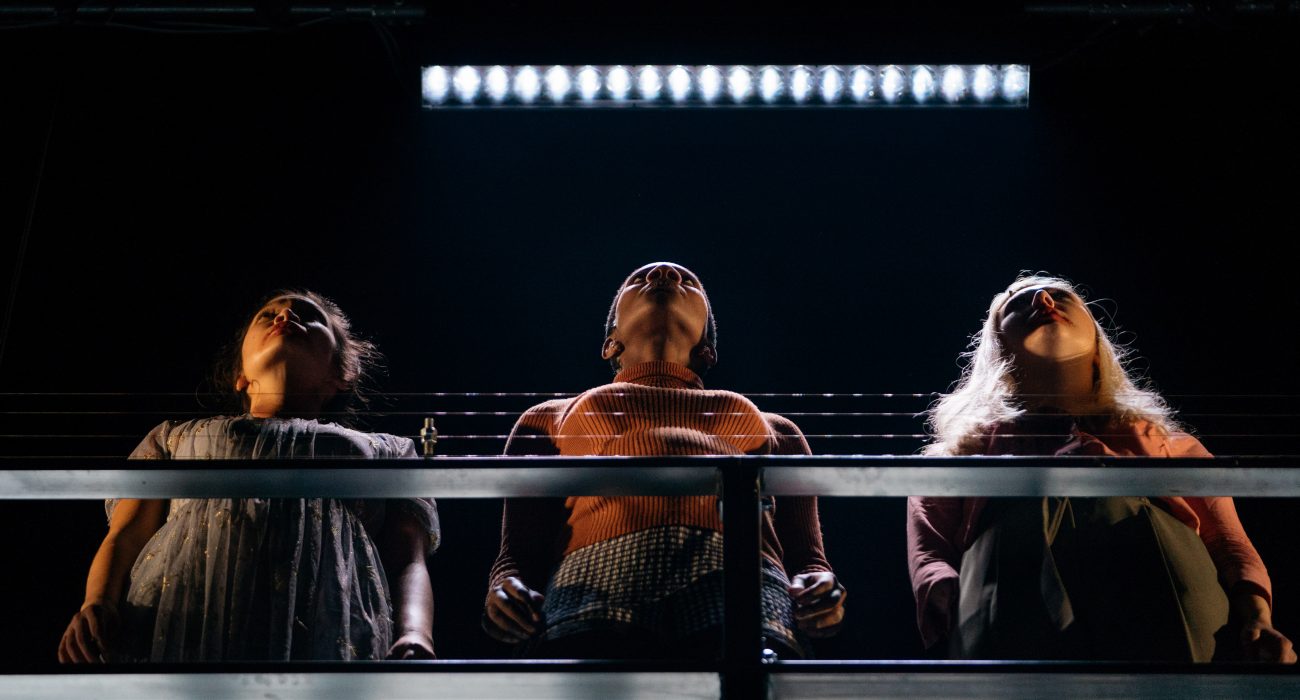 An emphasis was put on the idea of bringing the female characters in the play to the fore. I appreciated the irony that both plays are named for their male leads. The concept was strongly portrayed by the impressive presences of Melissa Johns as Amelia and Kezrena James as Bianca in Othello. The addition of the a cappella singing of ‘Oh Sister’ by Anjana Vasan also supported the more female – centric aspects. However, I didn’t feel like this was emphasised enough to be central to this retelling. The standout performances in the first half (Othello) was the cunning Iago (Collings) and the witty, oblivious Cassio (Sandy Grierson).

I was unsure of Ery Nzaramba’s portrayal of Othello. I found it stilted and bordering on a childlike tantrum at times. However, I don’t know whether this was a deliberate choice in order to contrast the stronger female characters. Kirsten Foster grew on me with her Desdemona, switching impressively from a smiling, obedient wife, to powerful and commandeering. The toxic and violent relationship between Iago (Samuel Collings) and Amelia (Melissa Johns) was completely believable even given their limited scenes together.

I am loath to spoil any of clever twists and links between the two plays (split by the interval). I will say that rarely have I gasped and flinched at one performance so much! This performance kept the audience on their toes in the best way. Beyond the show’s many twists and turns, the well known and expected death’s absolutely terrifying and lifelike.

The design of the Othello set (Basia Binkowska) was stark and impressive. A wall of tin sheeting left only the front of the stage for the action, complete with an overhead walkway.  The tin wall put powerful emphasis on the violence in Othello, each bang reverberating through the theatre.

The second half, Macbeth, was very impressive. Sandy Grierson seemed made to play Macbeth, not just because of his Scottish accent, but his presence and ability to demonstrate the layers of Macbeth’s inner conflict and lust for power. The overhead gantry was also made use of in very clever ways, having the witches stood above the scenes, always watching and meddling. This added another layer and sense of foreboding.

A special mention must go to Kezrena James’ delivery of the classic Act 1 Scene 5 Lady Macbeth speech (“unsex me here, and fill me from the crown to the toe top-full”), it was powerful and haunting, just as if she were becoming a witch herself. A further mention to Samuel Collings’ incredibly genuine grief-stricken scene when he finds out his wife and children have been killed.

For Macbeth, the whole stage was used and the design was very imposing. Wall to wall shiny black tiles and a white tiled floor. Stark in a completely different way and making the primary colour costumes really pop against the sterile environment.

This show had a great visceral power and comments beautifully on the connections of Shakespeare’s plays. I may not have experienced it the way it was intended but I highly recommend it, nothing quite prepares you for OthelloMacbeth.