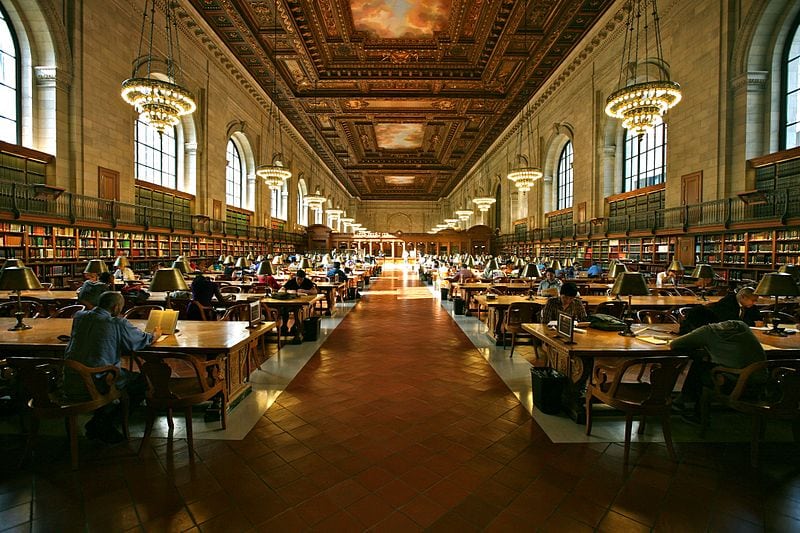 At three and a half hours, Ex Libris: The New York Public Libraries is probably one of the longest films I’ve committed to watching, and it is honestly worth it.  It’s a well-thought out film, with scenes capturing aspects of the lives that are brought together within the various New York Public Libraries. This film is a wonderful tribute to all libraries and those who work there and highlights the continued importance and relevance of their services.

Ex Libris: The New York Public Library is a film created by Frederick Wiseman and is best described as an observational documentary about the New York Public Libraries. Wiseman has a non-obstructive style of filming so as an audience watching, it’s as if we are present in the library instead of watching through a lens in a different part of the world.

The scenes shown are familiar; rooms full of people listening to music whilst typing away at their laptop, someone dozing off in the corner, another scrolling through an online clothing shop. Seeing the consistency and reliability of what a library provides is comforting and nourishing. An architect featured in the film points out that all libraries must also be unique as the communities surrounding them use the space differently and that the library must adapt to this. Wiseman gives time and space to both the architecture within the libraries and the outside showing the surrounding shops and capturing images of life in New York.

The uniqueness of the use of each library is obvious in the film as some provide a relaxed space where people do talk whilst others contain reading rooms with the all-encompassing silence stereotypical of a library. Wiseman visits a Braille and Talking Books Library, which was something I hadn’t heard of previously and within this space we are shown a session where braille is being taught. This is an aspect of diversity that can be forgotten, and it shows the valuable work carried out through the library system by giving opportunities and raises awareness of these. Wiseman also shows us a talk given by a sign language interpreter, and in sharing these scenes gives an appreciation to those involved in these communities. Education at all ages is provided through various library learning programmes that we see during the film and in doing so shares the heartening scenes that occur within these public spaces.

The only group that we repeatedly visit are those who surround a table with coffee cups and notebooks at the ready, discussing where the funding for these libraries should go and organising various branches of the New York libraries to make it a cohesive and functioning system. Through these repeated meetings, I appreciated the wide variety of men’s ties, and the discussions that normally occur behind closed doors.

The focus of the meetings we see is about making broadband and digital technology more available to those who don’t currently have access.  There is no conclusion or culmination of these meetings as this is just a snapshot of them, but we see the distribution of internet hotspot devices in a local library on loan much like a book which I hope was successful.

Ex Libris: The New York Public Libraries is a wholesome film, where we are given the privilege to observe what is happening at the instant of filming. Through doing so the audience can learn a lot about New York and those that live there.

Watch it without your phone, in a darkened room (ideally a cinema) and embrace the journey that Wiseman takes us on, and the people we meet. I came away and had to discuss all the little details of the film, exchanging favourite scenes and singing praise for libraries all around. This will be a film cherished for centuries to come, and I’m thrilled that Wiseman chose to give time to libraries and let them have a moment of stardom.