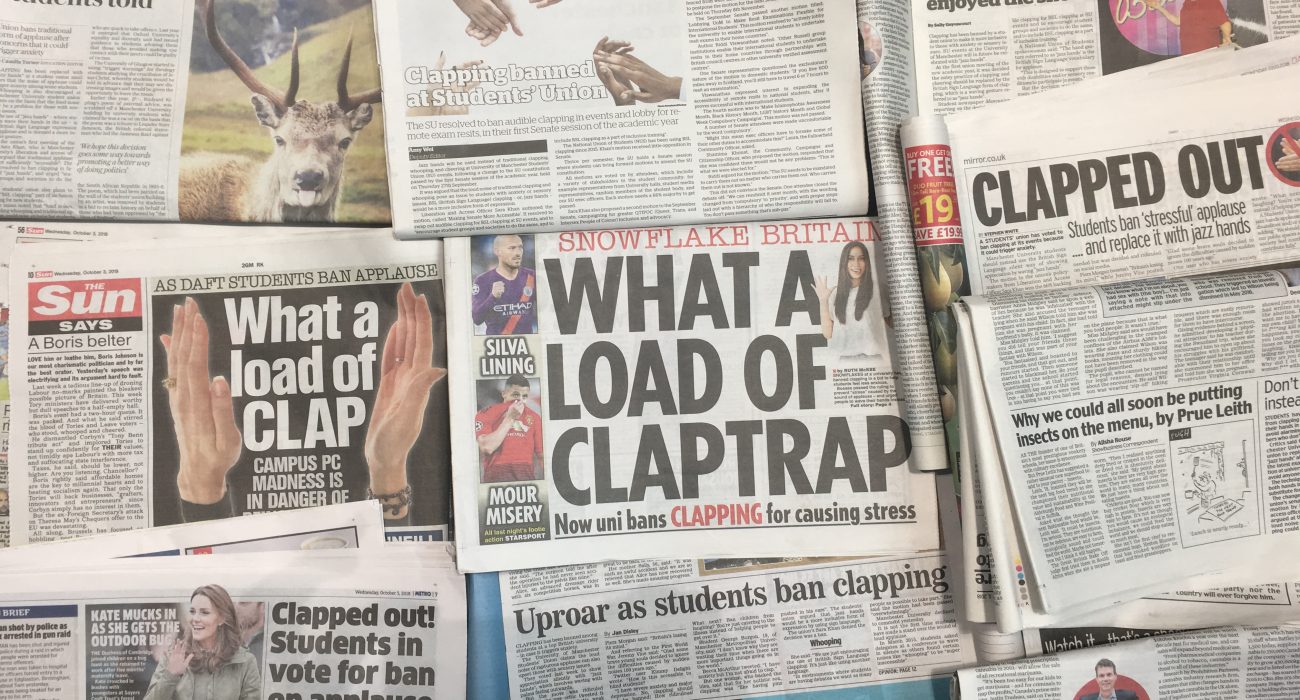 A global media storm has followed the Senate motion to “swap audible clapping out for British Sign Language (BSL) clapping at SU events”. First shared by BBC North West’s Twitter account, The Mancunion’s story went on to the front pages of national UK newspapers, prime-time television, and even international news.

The University of Manchester Students’ Union’s (SU) policy caught the eye of national UK newspapers such as The Guardian, The Daily Telegraph, The i, The Sun, The Daily Star, The Daily Express, Metro, and The Times. Internationally, ABC News picked up the story after one-time Presidential candidate Jeb Bush tweeted the story, writing: “Not cool, University of Manchester. Not cool.” It was also covered by Russia’s Sputnik International, and Australian radio station 3AWRadio.

Good Morning Britain co-host Piers Morgan tweeted eight times about the SU policy and its fallout. His seminal tweet, on Tuesday 2nd October, screenshotted The Mancunion‘s original story with the caption: “Britain’s losing its mind.” The tweet gained over 18,000 likes and over 4,000 retweets in two days.

Piers Morgan debated SU Exec International Students Officer Riddi Viswanathan on the show on Tuesday morning. In the same show, he asked celebrity businessman Lord Alan Sugar what he thought about the SU’s move, to which The Apprentice host retorted: “Well you have always attracted the clap haven’t you.”

Morgan was forced to apologise on air to “anyone offended” by Lord Sugar’s lewd joke.

The original policy, proposed to Senate by Liberation & Access Exec Officer Sara Khan, resolved: “to swap audible clapping out for BSL clapping at SU events in order to make them more accessible”, and secondly, “to encourage student groups and societies to do the same, and to include BSL clapping as a part of inclusion training.”

However, the SU have since released an official statement that they “are not banning audible clapping” and that the policy resolves to “encourage British Sign Language (BSL) clapping during our democratic events only.”

Sara Khan commented on the media storm by saying: “The thing about this position is that intellectually I think that we know that things will get covered, but until a few months ago when we had the media explosion over the poetry — I think that was the first time I realised that people outside of the University and Manchester would care about what we were doing. I’ve been bombarded with media requests, emails, and tweets constantly.

“We’ve had quite a few students email us personally, or tweet at us, or comment on things, saying that they have issues like autism or sensory issues and they’re really happy to see this in place. It makes them feel like they want to take part because their concerns are being taken into account. One person told me, ‘I’ve never taken part in SU democracy before but now I want to’, which is really cool.

“Something I’ve found really bizarre is that… most of the abuse I received wasn’t [racially charged], but some of them were. They commented on the fact that I was gay or Pakistani. ”

Riddi Viswanathan remarked that “this week has been an extremely busy, but a fun-filled and thought-provoking one. One big lesson learnt is how the media blow very small issues up in order to match their narrative and get across the points they believe in and label us as snowflakes.

“What has been heartwarming is students who have never spoken up, to speak up and recognise their disabilities and see the SU as a place for them. Also it’s extremely encouraging to see many other Unions to so want to experiment with BSL clapping in their democratic events – the University of Bedfordshire equality team have been supportive of using BSL and making democratic events more accessible.”

Student supporters of the motion include Jasmine, a second year French and Spanish undergrad said: “I might have thought it was a joke initially, but [I am] someone with Autistic Spectrum Disorder (ASD) and anxiety. When we get stressed, the hypersensitivity that people with ASD experience means that unexpected, loud or unpleasant sounds can become magnified and trigger intense reactions like panic attacks, ticks and, in cases such as mine, dissociation and seizures.
“Once people adapt to the idea, I don’t think not clapping is a massive sacrifice to pay for increased accessibility and sensitivity to those who would benefit from it.”

Students remain divided on the issue however, with Sarah commenting: “there are so many other issues pertaining to inclusion of people with disabilities and minorities that the SU can address.

“‘Suggestions’ such as these just further seek to isolate people by calling things out that many people of their targeted demographic don’t have an issue with. This is a classic example of people creating issues of ‘broken things’ instead of actively seeking out and fixing things that are truly wrong.”