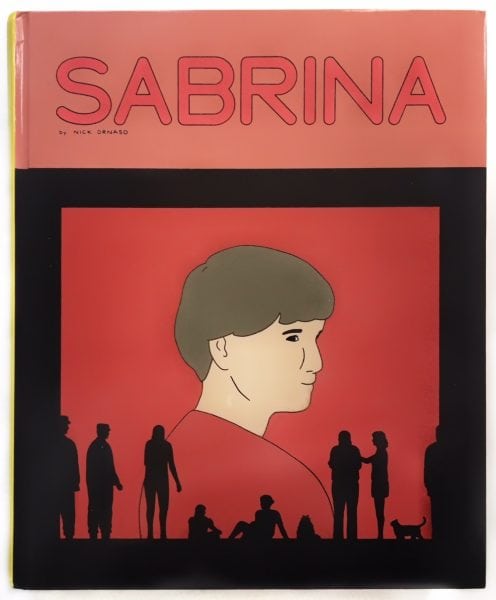 Are you the kind of person who stays up to 3am watching conspiracy theories videos? If, like me, you are, you’ll love Sabrina by Nick Drnaso. As the first graphic novel ever to make it onto the Man Booker Prize long list, Sabrina explores the nastier side of conspiracies. Government agencies are accused of creating tragedies and grieving families are dismissed as actors. Sound familiar?

A little too familiar. In the opening pages, we’re told that “this book is a work of fiction […] any resemblance to actual persons, living or dead, businesses, companies, events or locales is entirely coincidental”. You’ll only find references to specific dates if you pay close attention, but there is no doubt about when this story is taking place.

The novel is full of hysterical radio hosts, good men with guns, and online trolls with a scary amount of access to information. It’s hard to believe that this story didn’t actually happen and saddening to know that very similar stories do. Be prepared to feel uncomfortable, be prepared to be upset. On every page, you’ll see empty rooms, a lack of landmarks and the repeated use of small panels stripped of dialogue.

Sabrina is set a normal town in a normal state, full of normal people. Don’t get me wrong, there’s nothing boring about the novel. The simple style hammers home that this story could be happening anywhere in America. Even the drama of suicide and murder is rendered simple, un-gory and undramatic. Drnaso strips the story bare to great effects.

By showing us the minutiae of the everyday, Drnaso brings readers close to the characters. We watch every small movement throughout their day, we watch as they pace, talking on the phone, how they turn to check nobody’s watching their screen. We are invisible bystanders watching their lives slowly crumble.

So much is left out in the novel. Somehow, I could actually hear the characters’ murmuring voices, even when their conversations were only represented with blank lines. We stand metres away from the speakers, unable to hear the full story, made to fill in the gaps. Normally I’d see this kind of minimalism as a negative thing, but having to figure out exactly what’s being said and what’s going on is half the fun.

It’s not all doom and gloom in the novel, there are some lighter moments. One image comes to mind: one of the main characters draped in a Snuggie. Some of the more feel-good stories in the novel made me internally cringe. You know the type, “a DOG takes the bus to see his best friend!” We see articles like them every day. Yet Drnaso’s art style renders them as ordinary and blank as an empty bedroom, a suburban street, or a dead body.

Reading Sabrina, there was a constant uncomfortable feeling in my stomach. I had a creeping realisation that this was not going to end well for anybody. Drnaso is a chronicler of out times: there are stories of violence against women, smear campaigns against a family, men’s mental health issues and the way that the media casually shifts from one violent atrocity to another.

We are forced to come to terms with seeing almost identical stories more and more in real life. Rather than a steep crescendo at the end, you start to dread that (Groundhog Day style) you’re going to be forced to relive the story again; to see more people get hurt, stalked and killed. The cycle of news moving cooly onto the next tragedy.

I was expecting clichés, but Sabrina shows America in a way we don’t normally see. The humdrum of the characters’ daily lives couldn’t have been told through film, or even prose. Drnaso’s bare art style brings real issues to the fore; set against the backdrop of simple Americana. It’s never predictable, despite the odd “The cat’s gone missing” moment. Sabrina is a truly excellent slow-burn that manages to touch on almost every current issue being discussed in the US today; it’s well worth your time.