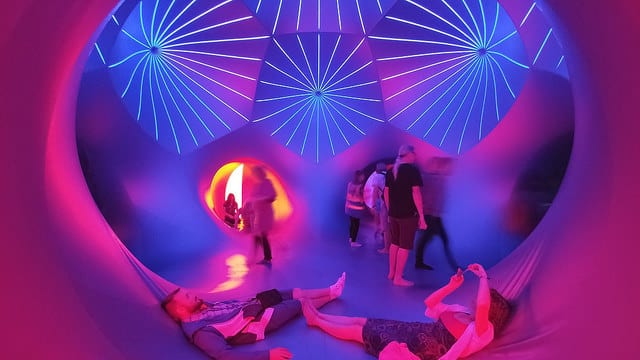 For a physicist whose scientific career just “fell into place” over the years, Dr. Rob Appleby has one impressive record. He has been a part of some of the world’s leading experiments and contributed to ground-breaking technology paving the way for discoveries on the sub-atomic level and, most recently, his team at CERN have successfully rotated a beam of protons for the first time using crab cavities.

The new technology vastly improves the frequency of collisions that occur in four separate locations in the 27 km circumference particle accelerator at high energies of around 13 tera electron volts (TeV). To give some idea of how much this quantity is, the energy in the motion of one mosquito flying around is approximately 1 TeV although on a scale 1012 times larger than that of the collisions in the LHC.

More collisions lead to a higher chance of seeing something exciting. For example, the Higgs boson, which was measured at the Large Hadron Collider (LHC) in 2012. Appleby described the use of crab cavities in rotating the beam of protons to create a “crossing angle” to avoid unwanted collisions as the particles leave the interaction region. He went on to enthusiastically act out with his hands a sausage-like bunch of protons moving from side to side in the collider, the overlap of the bunches corresponding to the number of collisions per second which is called the luminosity. It was clear that the man loves his job.

But for Rob Appleby there is more to life than working on beam dynamics and lattice design for the world’s largest particle accelerator. In between his research and working as a lecturer, he decided to set up the Tactile Collider project. This project aims to make the physics of particle accelerators more accessible to the visually impaired. It tours the country as an event, visiting visually impaired schools and music festivals. The event uses touch and sound to enhance the learning experience, such as using magnets to feel the effects of the magnetic force and to help learn how particles are accelerated to such high energies. Furthermore, the scale model “CASSIE” looks and feels like a real particle accelerator – it even sounds like one.

Dr. Appleby describes how hearing the sounds of a Higgs boson and running around in the style of an accelerated proton is always greatly received by audiences, creating a lot of laughter and energy at the events. At music festivals, “people who are sighted understand the physics – and enjoy it more – by using these methods,” as opposed to conventional classroom teaching methods. In terms of what’s next for the Tactile Collider, he spoke of using drama and acting specifically for the visually impaired as a new teaching method.

Next, I took it upon myself to throw Dr. Appleby a curveball and asked him to comment on the recent gender equality debacle at CERN. What was supposed to be a workshop encouraging women and girls in the science and technology field, disastrously became a host to one professor’s “highly-offensive” and “unacceptable” presentation claiming physics was built by men and that men have been discriminated against in the field for political reasons. It’s safe to say the audience of young, female physics-enthusiasts were not amused. Appleby was keen to assure that the rest of the scientists working at CERN are not like that and this one particular “errant” man had “made a very career-limiting move.”

A final question for Appleby: does more need to be done to get young people interested in science? There’s always room to do better, according to him, although a lot has changed in the last fifteen years or so. “The dream is that everyone can have an interest and a knowledge of it”. From his experience at music festivals, people are always intrigued and eager to ask questions about science. Last year, Appleby was at Bluedot Festival in both scientific and musical capacities, doing his bit for physics outreach as well as fuelling his passion for DJ-ing.

Keen on combining science and music, Appleby has used samples in his techno music from sonified Higgs events. He even talks of coordinating audio to create a 3D soundscape, so that listeners can experience top quarks whizzing around above their heads. Collaborating with a VJ (visual DJ artist) to create a visual show of particle collisions enhances the music, a technique that makes up a unique project called Science in the House. You can catch them again this year at Blue Dot festival and last year’s live set has been uploaded to Appleby’s Soundcloud page.

On a philosophical note, there is certainly importance in combining arts and science which are undoubtedly both fundamental to the world we live in. It seems Dr. Rob Appleby is one of the best examples of what it means to be a physicist: a curious researcher, passionate teacher and creative mind. It will be interesting to see where his various projects lead him in the future and how the advancements at CERN can uncover so many more mysteries of the sub-atomic world.