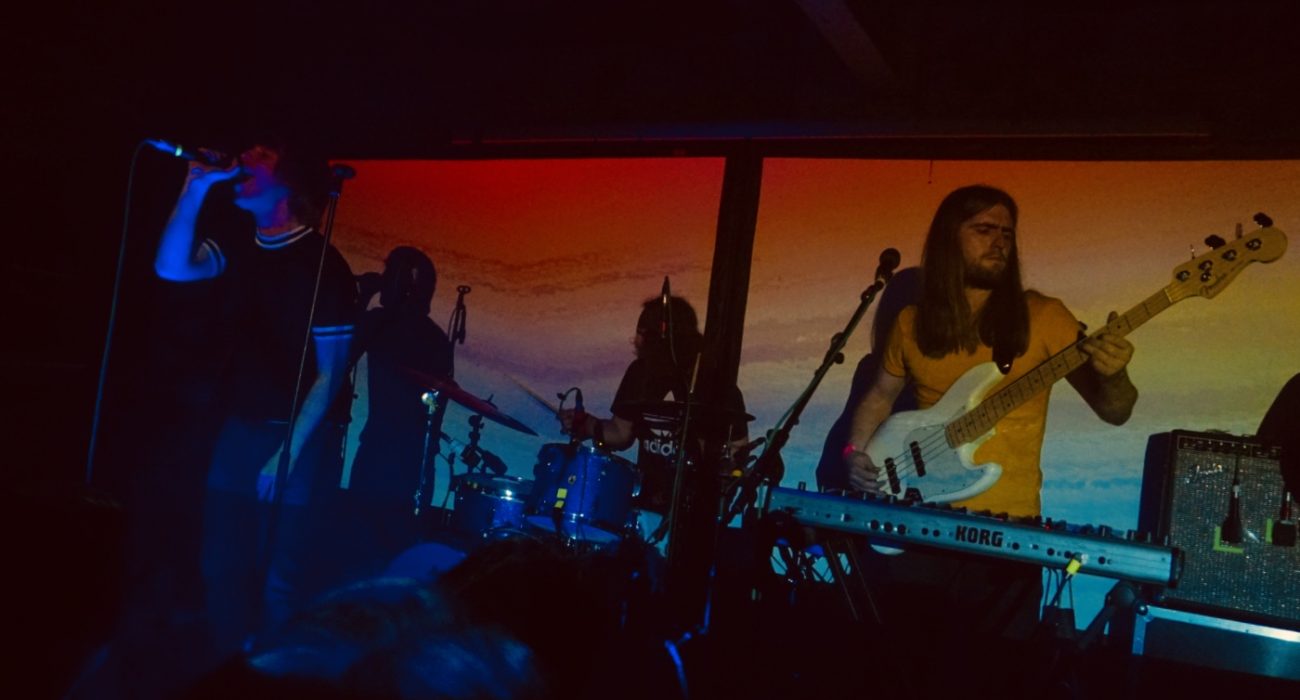 Sublime scouse 5-piece, The Vryll Society are a refreshing yet nostalgic wave of celestial wonder, mellow undertones and seraphic vocals.

Given The Vryll Society are such a diverse, complex and sophisticated disco, fans may have a tad bit of difficulty pinpointing their actual genre. Even the band themselves couldn’t quite reach a decisive answer and settled on “psychedelic space-rock”, leaving room for its own peculiar ambiguity.

However make no mistake, there is certainly no room for doubt where their songwriting is concerned. In fact, it appears the Liverpudlian lads are so indulged in their cosmic creativity that they often find themselves having  “to start cutting back” large parts of their songs before they’re finalised (…even then they’re averaging 6 minutes long). As the softly spoken frontman Mike Ellis elaborates, he’d often “pop to the shops, have a brew” and the band would still be working on the same track.

This is exactly what makes this fusion of virtuosos so intriguing. As The Vryll Society took to the damp corners of the sold-out Manchester’s beloved Soup Kitchen, a venue that they’ve played once before “many moons ago”, it was as if fans had been plummeted right out of their mundane duties and into an intimately illusive jamming session. The same could be said for the band themselves who are all currently in “full-time jobs,” aching for that big break where they can fully pursue their intergalactic voyage.

Establishing themselves as a “music-led” band as opposed to vocal led, The Vryll Society take inspiration from the likes of Pink Floyd and Air with an intention of taking fans on a journey. A journey pioneered with introspective vocals which are embellished by a cluster of intricate and spine-tingling parts. These individual efforts form a concoction of utter bliss, leaving your soul opened with a feeling of transcendence.

After finally releasing their pilgrimage guide to higher levels, also known as their debut, Course of the Satellite, the iridescent 5-piece “spent a few quid” ensuring each and every single member of the audience would be able to savour the experience that is The Vryll Society.  Two large “game-changing” screens projected fascinating intergalactic and kaleidoscopic imagery onto the worn walls of the basement acting as a nod towards the likes of Floyd. The band are certainly one step closer to pursuing their dream of hosting a “light show”. Despite there being a running joke amongst the band that they can’t always see anything due to its glare. I guess the price to pay is worth it guys?

Having seen the lads play Sound Control (may you rest in peace) a year ago at Neighbourhood Festival, there is simply no comparison in how much they’ve grown and mastered their performance. When asked which song they loved to play live the most, the lads couldn’t quite settle on the same answer as Mike put it, “it changes with every performance” although he did have an incline towards ‘Give into me’.

‘Give into me’ is one amongst a few of the totally new material that The Vryll Society have launched on Course of the Satellite. Having noticed that it’s a slightly shorter and less complex sounding track- at least compared to their previous singles and Eps, the band assure me that it’s of no significance to the direction the band are heading. Instead, songs such as “Give in To Me’, ‘Soft Glue’ and ‘Glows and Spheres’ serve as a display of “8 different colours”. In essence, the band wanted variety for their first complete project and with that, came some slightly poppier and “more direct” tunes. This really hooked the audience during their live set as the dynamic song changes acted as an instrument for re-intervention.

I did, however, question their reason behind not including their hit ‘Deep Blue Skies’, on their debut – a song they declared they were going to drop from the setlist just before they ended with it. The band unanimously agreed that there was no point in including a song they had already released, “why not include the new ones that we (they) think are better.” After noting that the band’s late manager and founder of their label Deltasonic Records, Alan Wills, would be very honest about the band’s material, I felt it necessary to ask what they think he’d have thought of the record. After a large discussion of reminiscing, the band agreed he’d be impressed and pinpointed that “Andrei Rublev” would have been his favourite.

The Vryll Society showcased a dreamy, serene and enigmatic performance that evolved into a totally sensual experience with ‘Air’, ‘Soft Glue’ and ‘Andrei Rublev’ being the highlights. It is clear the band have grown more confident and their investment into their live sets has truly paid off. Their drive and incessant hard work leave them yearning to play proper “arenas with light shows” or even become the first band to produce a “VR album”. Until then, the stellar quintet mention they wouldn’t mind working with “Kevin Parker and Mark Ronson” to experiment.