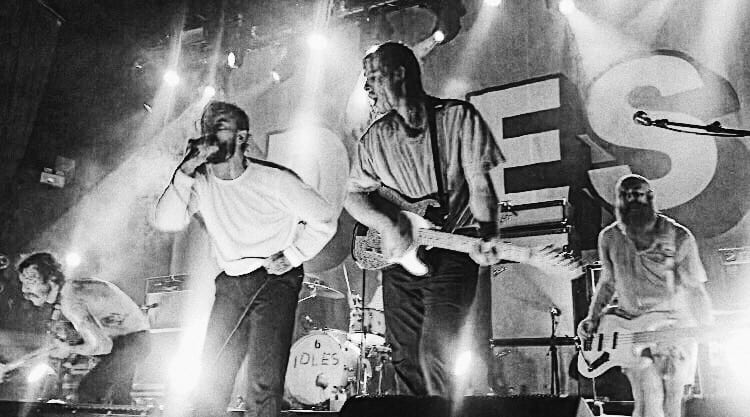 IDLES at the O2 Ritz

Moments later, the whole tone of the room switched as the remaining four members strode and took to their corners. Fans lurched forward, screaming till their lungs burnt, all with the eery backdrop that is the opening drum beat of ‘Colossus’.

Joe delivers his sermon with his right arm stretched forward, welcoming his following.

“Forgive me, father, I have sinned, I’ve drained my body full of pins…” and as the turbulent trio of Joe, Mark, and Lee all surged forward to match their entrance into the second half of the song, the crowd were already surfing, shoes were flying, and limbs were soaring.

IDLES persisted this erratic energy that resounded off every crevasse and essence of being within the packed 1,500-capacity venue. Despite IDLES’ growth in popularity, the rise in capacity did not seem to faze them an ounce.

Bowen’s shape fluttered across the stage with an authentically feminine swagger, playing to Lee’s feverish guitar strumming and his upper body that rocked back and forth at a sickening rate. Comically, whenever I glanced at Joe he’d either be mockingly playing the air guitar with his wrist tightly pressed against his chest, pointing to his “favourite scouse fan” or catapulting his spit up in the air.

Preaching ideas surrounding self-love, fragile masculinity, and a plea for social change, the Bristol-born band are known for pushing against the mainstream media. Their lyrics are used to challenge problematic phrases with this being particularly clear in the song ‘Samaritans’. “’grow some balls’ he said” and “Man up, Sit Down, Chin Up, Pipe Down”, were used in juxtaposition to a yelling of “I kissed a boy and I liked it” as Joe relentlessly pumped the air with 3 fans already going over the barrier.

This really hammers home the genuine stupidity surrounding social standards regarding how men are not supposed to show any emotions or any kind of fragility.  In fact, IDLES laugh in the face of it.

With a setlist consisting of the vast majority of their revolutionary second album Joy and featuring iconic Brutalism songs such as ‘Mother’, ‘Divide & Conquer’, ‘Heel/Heal’, and ‘Well Done’, IDLES honestly couldn’t have had a better setlist. Although, I would have quite liked to hear Joe sing ‘June’.

“HAAAA”, “HAAA”, “HAAAAAA” were the constant expressions made by Joe as he leant into his audience and clutched at the barrier whilst security were desperately trying to keep him in sight.  ‘Divide & Conquer’ was an out of body experience, as Joe’s strained and echoing vocals penetrated down the back of my spine prompting the hairs on the back of my neck to stand.

A fan favourite ‘Never Fight A Man with A Perm’, although having a less serious vibe possessed the same relentless vitality as a wall of fans shouting “concrete and leather”. This noise fought the instruments and invaded the stage where even the drummer, Jon and bassist, Dev appeared utterly elated by the crowd’s fervour.

Let’s put it this way, I’ve been to a lot of gigs and this was by far one of the best. Even though it’s clear IDLES are growing in popularity, I don’t seem to mind. If it means more people are supporting such ideas and sheer desire for love and acceptance, that’s fine with me.

IDLES are the most important band of this decade.