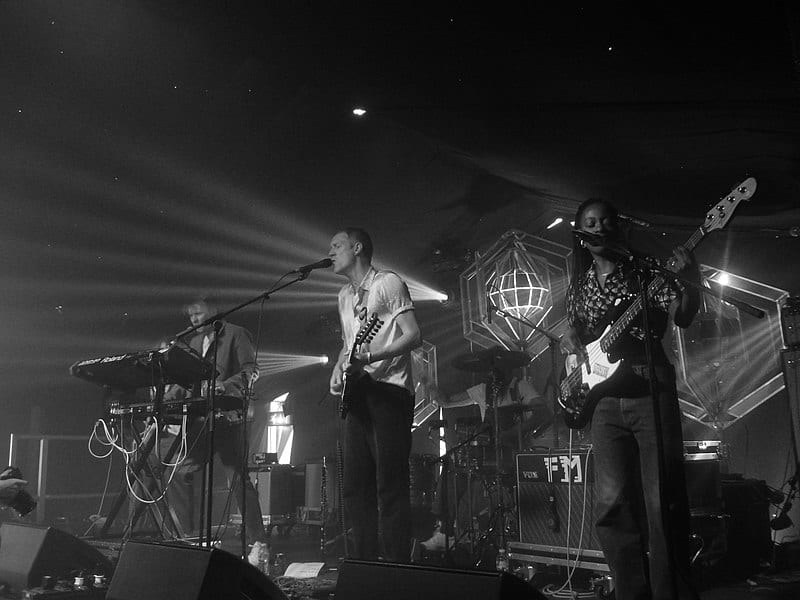 The London based dance and funk collective Franc Moody recently played The Deaf Institute on the second night of their UK tour. I had been a fan of Franc Moody for a while now but discovered once they were up on stage, to my surprise, that Franc Moody does not exist. In fact, it’s Ned Franc and Jon Moody who lead the collective (I’ll leave it to you to figure out where the name came from). Opening for them was Derbyshire group Patawawa who came with a wild and energetic performance; the crowd was only doing a casual sidestep for their set, but their music was a lot of fun.

Franc Moody stepped on stage promptly, six of them on this night, and with them a beautiful array of instruments. Jon Moody was seen often switching between oboe and keyboard throughout the night. I was impressed to see that almost every sound in their complex and layered recordings was performed live. They opened with one of their hits, ‘Pheromones’, and it was a tight and powerful performance from the get-go. These songs had a slow, bass-heavy build up that exploded into funky rhythms, the likes of which I had never heard live before.

The whole band had an awesome appearance and stage presence, with Ned Franc looking particularly cool donning a buzz cut and a long beige trench coat. It was refreshing to see two women in the group as well, and they produced some really fabulous basslines and rhythms.

When they started playing it elevated the spirits of everyone around — it was impossible not to dance. To paraphrase Kendrick Lamar, the funk was within us. They transitioned quickly between songs, playing some of their new tracks like ‘Make You Smile’ with seemingly effortless precision and fluidity.

Halfway through the set we were told it was going to slow down for a second, and with that Jon Moody whipped out his oboe to perform a slow, slightly psychedelic piece with Ned on the keys. It was a total change of pace and confused a lot of people, but the band was really just having fun.

They returned to their pulsating, dancey form soon enough, and in the latter half of the set most songs led into extended jams that really displayed the full talent of the band. Moody brought out a keytar (!) in these jams, adding another layer of showmanship with his ability to dance and play simultaneously.

They let the audience know ‘Dance Moves’ would be their final tune but as it finished, the group almost immediately asked if we wanted another song — one of the shortest times between the “end” of a gig and the encore I’ve ever seen. It was nice to see them not drag on the worn tradition of completely vacating the stage for a few minutes. Franc Moody was a powerhouse performance that exceeded my expectations — I would love to dance to those funky beats again.